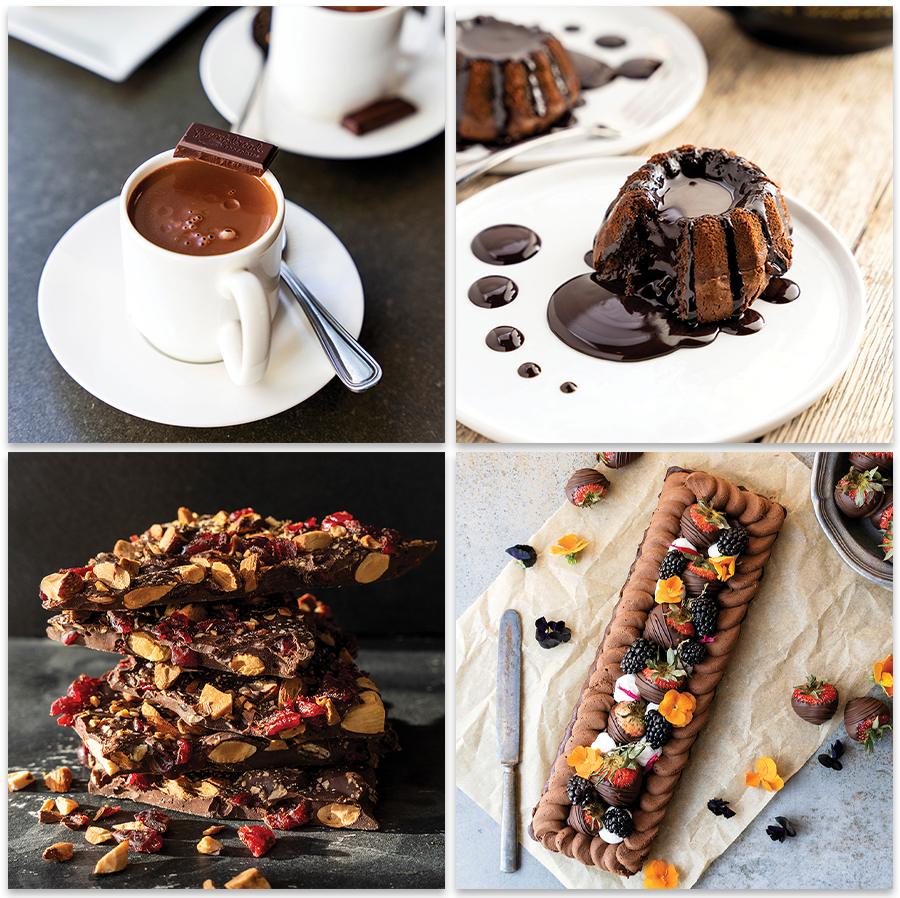 Liquid truffle, a warm and gooey drinking chocolate, is a flavorful upgrade from hot cocoa, perfect for the winter months. It’s the signature dish of French Broad Chocolate, an Asheville chocolaterie, for a reason—it’s just the right balance of cocoa guaranteed to warm up indulgers no matter the temperature outside. “I was in my kitchen and I was hand-rolling truffles,” shares Jael Skeffington, CEO and co-founder of French Broad Chocolates. “I was in this really lovely flow state, and I felt a tingling in my hands. I looked down at my palms, and the clear thought in my mind was ‘chocolate is the thing that will make me happy.’” That epiphany has held true, since French Broad Chocolate has been in the dessert business for more than 15 years now.

In 2006, Skeffington and co-founder Dan Rattigan began making chocolate dishes out of their home and selling them at local tailgate markets. Thanks to community support, the chocolatiers’ first storefront, French Broad Chocolate Lounge, opened downtown two years later. "We wanted to serve chocolate in a place you could lounge and take your time, be with your chocolate, be with your people and your community," explains Skeffington. "We tried to create a beautiful place with not only chocolate and desserts but coffee and tea, wine and beer." The city responded with devotion, and soon the Lounge moved to its current home in Pack Square. Not long after, French Broad Chocolate Factory opened, with the business now sourcing and making their own chocolate as well as other key ingredients in their recipes.

“Drinking chocolate is the oldest reported way to consume chocolate,” explains Skeffington. Made from simple ingredients—chocolate, cream, half-and-half, plus any spices and flavors to your liking—liquid truffle is a ganache that, while easy to make, is quite a luxury. Liquid truffle is meant to be savored, making it a great dessert for both social gatherings and for pampering your tastebuds solo. >>Click here for the recipe

Unlike the classic science fair project, a molten chocolate lava cake won’t erupt, and instead of newspapered volcano walls, warm, airy cake houses the rich chocolate batter inside. Crave Dessert Bar, located in downtown Asheville, has taken this timeless dish and made it their own, creating an aromatic, sweet treat perfect for an after-dinner snack. Crave Chef John Cronk says, “I want to create an experience that is shared. It’s not just going into a restaurant, it’s a memory.”

Beginning as a passion project in college, partners Adam Aberra, Sheldon Osborne, and Clint Medlock opened their first location in Charlotte, and later opened their second location right here in Western North Carolina. Medlock explains, “Crave is truly an alternative to nightlife. We want to be a place where everybody can go and have a nightlife experience that’s a little bit different.” Desserts like the lava cake, wine and spirits, savory bites and more all contribute to a community experience for diners. “The big idea behind [Crave] is it’s shareable,” Medlock affirms. Both crafting and eating a dessert designed to be shared inspires friendship and warmth.

It’s important to note that a chocolate lava cake isn’t filled with a separate fudge; rather, a lava cake is an intentionally underbaked cake. By underbaking the dish, it creates a sturdy, soft outside with a molten appearance and texture in the middle once a bite is taken.  “A lava cake is a classic dessert, it’s not reinventing the wheel, but one thing we do use is quality chocolate,” explains Cronk. “When you’re using a key ingredient that is really good—a quality ingredient such as our Noel 72% dark chocolate that we use—it makes a huge difference. Simplicity is a beautiful thing.” And make no mistake, what the lava cake lacks in complexity, it dazzles with each melt-in-your mouth bite. It might just be the most delicious dessert you try this winter, and it’s sure to satisfy. >>Click here for the recipe

Since its grand opening in 2002, Well Bred Bakery has been Asheville’s go-to spot for a fresh breakfast pastry and light lunch options. The bakery celebrates 20 years in business on December 29, 2022, and since 2014, it’s been consistently voted Best Bakery in Western North Carolina, a cachet even more impressive against the multitude of eateries that decorate the city. Owners Ruben and Judy relocated to Western North Carolina from New York in 1998 in hopes of enjoying a slow-paced retirement, but years later, Well Bred has four locations across the region.

Laura Bogard Taylor, Well Bred’s general manager, has worn many hats over the nearly-twenty years she’s been with the bakery. “A lot of our recipes are tried-and-true from when we opened originally,” she explains. Patrons can find dozens of menu items ranging from eclairs, croissants, pies and cakes, brownies, cookies, and even lunchtime sandwiches. Although their dessert flavors are quite varied, there’s no shortage of chocolate on the menu. Well Bred’s dark chocolate cranberry almond bark is a perfect wintertime treat that’s easy to make and dreamy to see and taste.

“The chocolate bark specifically happened because we wanted something really simple that was gluten free, dairy free, showcasing high quality chocolate.” Making a chocolate bark, Taylor explains, is simple and flexible. Well Bred uses house-roasted almonds, quality dark chocolate, and fresh fruit, but for at-home baking, any type of chocolate, nut, and berry can be added. Keep the bark in the fridge—or even the freezer if it’s not being served soon after making—for best results. “Eating the highest quality ingredients in the simplest ways is always the best,” shares Taylor. >>Click here for the recipe

Unlike your traditional chocolate cake, leavened to achieve fluffiness, a flourless chocolate torte has a dense, fudge-like texture. But make no mistake—a flourless dessert isn’t lacking anything. In fact, eliminating flour creates a unique texture that is rich and velvety, but also lightweight. Not to mention, it has the added benefit of being gluten-free, which means that gluten-intolerant indulgers can safely enjoy this dessert. A perfect addition to any winter gathering, it's a family-style dish that will satisfy your seasonal chocolate craving.

Posana, a contemporary American restaurant in the heart of downtown Asheville, boasts a hearty dinner menu, but don’t overlook their dessert list, or you might just miss out on some of the more scrumptious sweets in the city. Renee Hill, Posana’s lead pastry chef for the last four years, loves to be creative in the kitchen. “One of my favorite things about living in Appalachia, specifically the Western North Carolina area, is we have so many amazing growing seasons, and with every season, there’s always something that’s really new and lovely and fresh to play with,” Hill explains. “In my baking and my cooking, I really like utilizing the things that are being given to us by the world around us at the time, and making good food with the stuff that we’re given in this really wonderful place that we live.” As a chef and baker, Hill works to incorporate nostalgic warmth and culture in each dish she creates. “I really enjoy being able to touch people's lives and make a difference in a way that is focused around fellowship and community,” she explains.
“It’s a mix between fudge and a cheesecake,” describes Hill of the torte. The recipe is also flexible and can be tailored to each season by switching up the garnishes. But for winter, chocolate covered strawberries and blackberries make for the perfect combination. >>Click here for the recipe