Lessons in Bread: The Walnut Schoolhouse in Marshall gathers a community of bakers, new and expert, for hands-on learning in the rustic art of bread baking 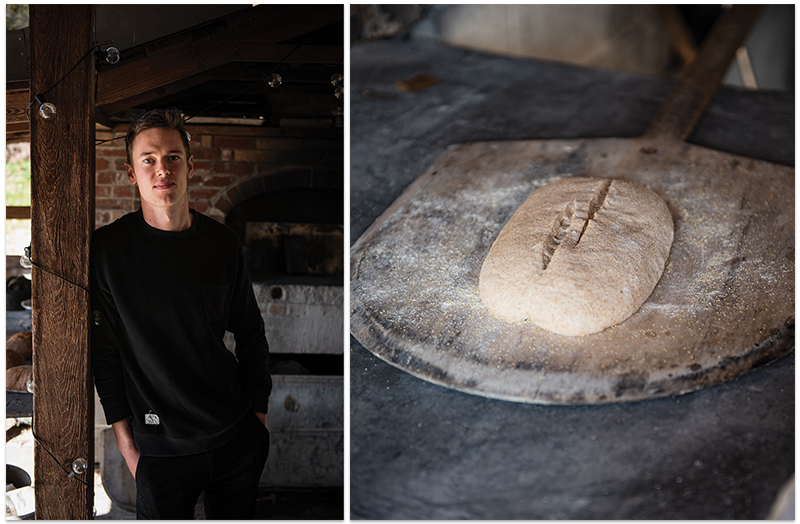 On the Rise - Brennan Johnson (above left) runs The Walnut Schoolhouse in Marshall, where he teaches workshops in the art of bread making.

“Do not let the starter rule your life,” says baking instructor Brennan Johnson, speaking to students in a spartan classroom kitchen early one Saturday morning. They stand at stainless steel commercial-grade kitchen tables—a glass bowl, scale, recipe sheet, and wooden board at each setting.

“Water will be your best friend today,” Johnson also notes, placing pitchers of water by each pupil, as they begin to assess the simple ingredients before them: flour, water, salt, starter—all that’s needed for sourdough bread. They have traveled around fog-dusted curves and past mist rising above green fields to arrive by 8:30 a.m. at The Walnut Schoolhouse in Marshall for a workshop in sourdough bread-baking basics.

While these students will end their day better skilled in sourdough baking, this village bakery and learning kitchen offers classes and workshops inspired by many old-world artisan breads and methods, taught by Johnson and other guest bakers.

Tall and lean with boyish features, 26-year-old Johnson dons an apron and invites the students to introduce themselves. Each has come for a different reason and inspiration, but all have the goal in mind to expand their knowledge of baking. One is a seasoned restaurateur who wants to add to his culinary repertoire, one is a shepherdess who’s not been off the farm or away from her small children for months, while another works in manufacturing in Knoxville but is a hobby baker.

Johnson himself became fascinated with food culture and history early on, learning to make bread in his father’s backyard brick oven. He was the kid who always had the hand-packed lunches with tall sandwiches made from rustic, crusty breads. “It was almost embarrassing,” says Johnson, in recollection. “Sometimes I just wanted to be like everyone else with their Lunchables.”

His mother, a solid cook who had grown up on military bases in England and Spain, made hearty meals for the family. His dad experimented with breads. Being raised in Minnesota with this type of dietary background, versus the soft, bland grocery store bread and prepackaged items his peers enjoyed, would make all the difference in Johnson’s culinary ethos. But it was a trip to Western Europe in 2009 with his dad to study communal brick ovens that cemented his interest in this earthy and ancient tradition.

Johnson was 15 when they traveled to Spain, Italy, and Southern France. “To see these ancient ovens, once the centerpieces of the communities, as well as the food culture in general—the tendency to shop for fresh produce and bread everyday … it was eye-opening,” Johnson recalls.

With his father’s encouragement, the backyard baking turned into a summer job. Johnson sold loaves of bread at his local farmer’s market and to soccer teammates, coaches, and parents during practices. 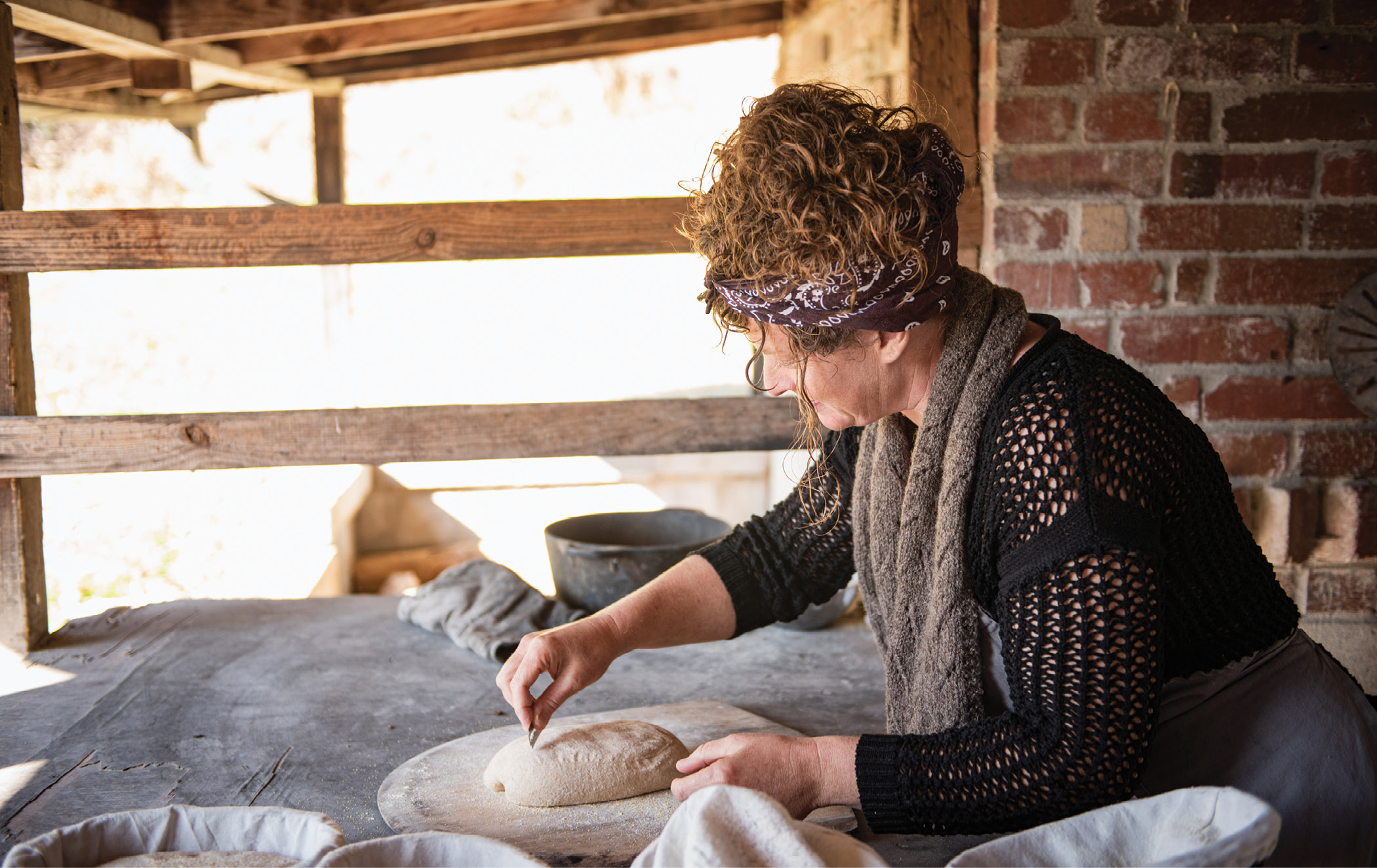 On Your Mark - After a morning spent making their own sourdough starters and preparing their loaves, students score their creations before they go into the 700-degree outdoor brick oven.

Johnson’s studies in Environmental Humanities at Whitman College, a small private liberal arts school in Walla Walla, Washington, allowed him to explore cultural relationships to food. After graduating, he continued working with food and nutrition in restaurants and bakeries in San Francisco, Portland, and Asheville, all leading to The Walnut Schoolhouse, which he named for a long-defunct school that once stood further up the hill in this small community. The bricks from that one-room schoolhouse that burned down were incorporated into both the outdoor and indoor brick ovens here.

A litany of pie makers and bakers have used this kitchen for their businesses, including Carolina Ground founder and miller Jennifer Lapidus, the bakers behind Asheville’s Farm & Sparrow, and baker and author Tara Jensen of Smoke Signals. Since Johnson took up residence two years ago and launched The Walnut Schoolhouse, he’s been sharing his curiosity in food studies and love of artisanal baking.

Not only does he develop his own classes, but he invites guest bakers from across the country to host additional workshops. One celebrates empanada-making, for example. Scandinavian baking is another course. He plans to invite an illustrator to team up for a day, offering baking in the morning and an afternoon drawing session, during which students will create still lifes of the actual baked goods.

“There is a lot of wisdom in older forms of bread making—flavor development, nutrition, regional sourcing, and sustainability, to name a few—and it’s important to me that those ideas don’t get lost,” he explains.

In future workshops, he plans on tapping into local ingredients and history.

“Corn has always been the crop of choice here; sorghum molasses is a fantastic alternative to sugar; local wheat flour and rye are more recently available in this region and are growing beautifully,” says Johnson. “Learning to use some of these ingredients in baking is something slowly starting to happen. It would be nice to see bakers use more of these ingredients here to be able to make products more rooted in our region.” 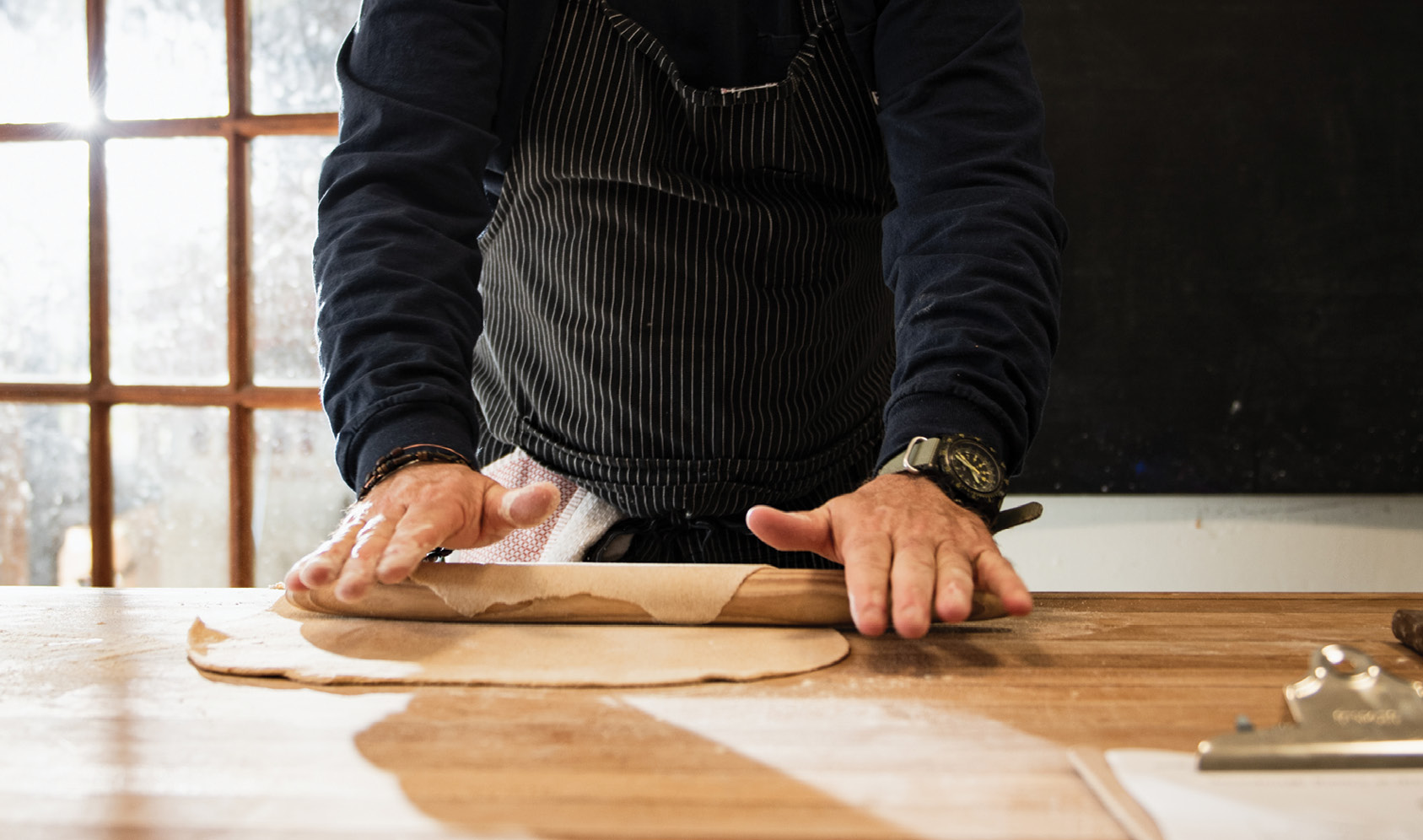 As students in this class measure their ingredients, Johnson walks around to each participant with a jar of starter, offering them a sniff. It smells faintly of vinegar—the wild yeasts and lactobacilli fermenting. This starter has been resting in the cooler since he began the business over a year ago. Many bakers boast about 10-year-old starters or even older, but, says Johnson, “Older starters don’t have more flavor or character than new ones if they are properly cared for. And it felt fitting to begin fresh when I moved into this space.”

He discusses with students “the shaggy mass of dough” they’re developing as they begin to mix ingredients, cautioning them to rinse their hands in a bucket of water, rather than the sink, so as not to clog the pipes.

He intermingles such nuggets of wisdom with philosophy on flour. Johnson recommends a mix of rye, spelt, and buckwheat. The buckwheat in today’s class comes from Farm & Sparrow. This high-extraction flour contains good amounts of bran and germ, and thus more natural oils that impart flavor.

There’s talk of a “creaminess” in another type of flour, how the heat of summer can over-ferment a leavening bread, and discussion about flour as fresh produce.

“Baking is like being in partnership with the natural forces of the earth,” says shepherd and chef Sharon Dubuc.

“An intersection of art and science,” adds Scott Alderson, a chef from Cashiers.

“American cooking has been an exercise in control,” Johnson states. “My bread philosophy is: What does that grain want to become in bread?”

The students have learned to “pinch in” the flour, adding it sparingly and kneading the dough in a slap-fold motion—slapping it down on the their boards or the table, and folding it over onto itself. They stretch it out to see the “windowpanes” (meaning to see through the dough without it tearing) until the mass becomes a malleable, manageable globe with the slightest sheen. These get placed into cotton towel-lined baskets and set aside to rise. 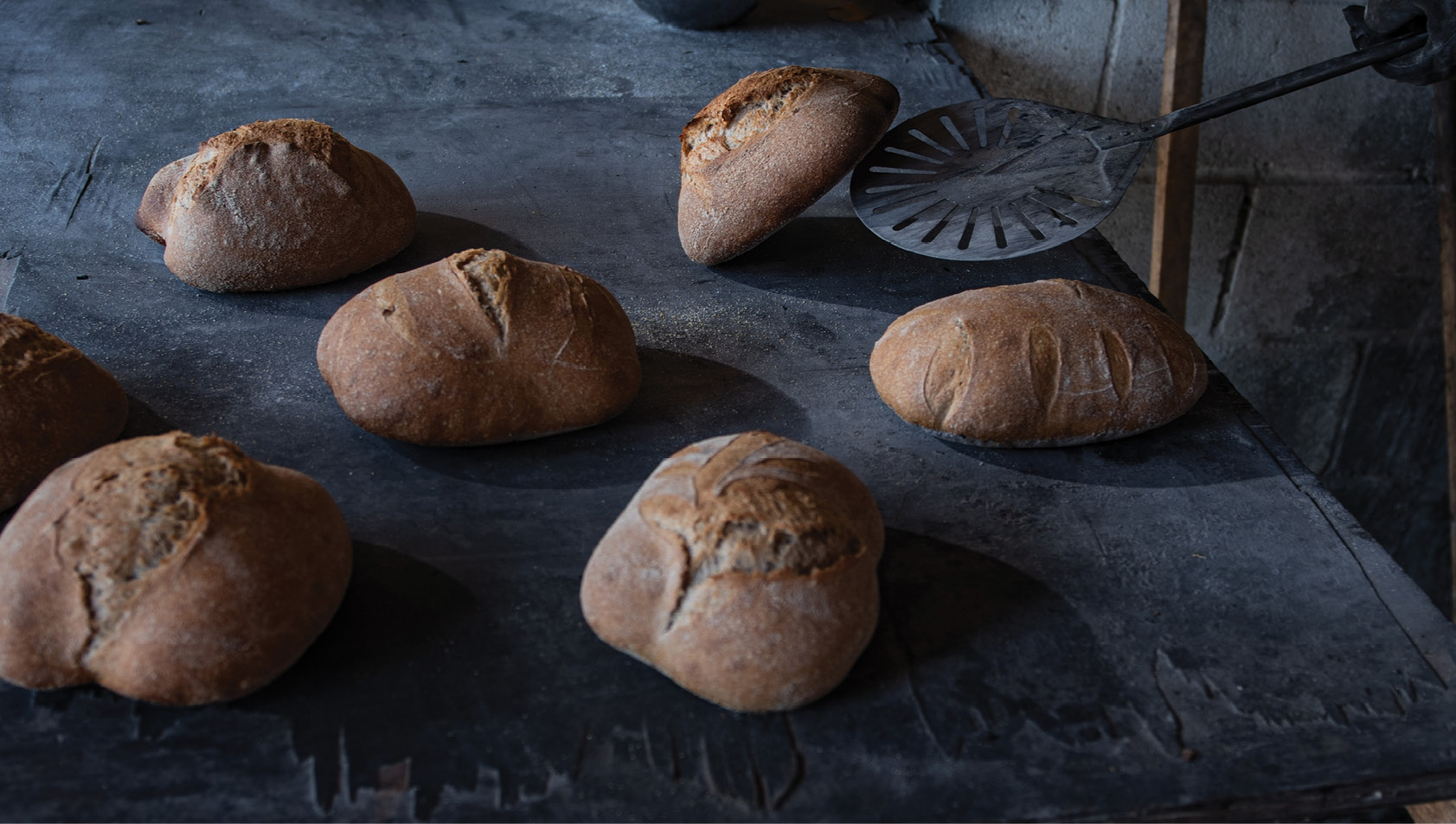 An Exact Science - Unlike breads made with baker’s yeast, sourdough results from the fermentation of dough using naturally occurring lactobacilli and yeast, which gives it its distinct sour taste.

The group works as a team on lunch prep, slicing paper-thin new potatoes and onions and tearing leaves of sage over an already-prepared sourdough foccacia. The fragrant flat bread will become the centerpiece of the forthcoming al fresco meal that concludes this and most of the other workshops held at The Walnut Schoolhouse.

Stepping outside, students stretch into the sunlight, and each baker gets to mark the loaf they made in class with a razor blade. Not just for beauty and differentiating whose is whose, the deep fissures in the smooth dough will allow the steam to escape and aid the direction of the bread’s rise. With a long paddle, everyone takes turns sliding a loaf into the back of the blazing brick oven that Johnson stoked overnight to 700 degrees, pausing only for the instructor to readjust their placement.

The sugars in the crust will caramelize; the crust will blister and crack. The intense heat will drive off excess moisture, concentrating the flavor of the grains’ nuttiness with the tinge of tart on the back of the tongue that reveals its sourdough origins.

While the loaves bake, Johnson retrieves creamy hummus he prepared this morning, a board of cold cuts, cornichons, sliced vegetables, and a leafy green salad for the simple picnic on the hillside. He pours filtered water into beautifully crafted Keyes Pottery mugs (Laura Keyes is a neighbor just across the road) and sets out a natural chardonnay from Asheville’s Crocodile Wines as the small group gathers for lunch.

That these simple ingredients could taste so wholesome and fully satisfying under the sun tells as much about this baking experience itself as it does about Johnson’s talents as a teacher. The air, the sky, the setting, the impassioned learners have come together to create a shared experience that transcends time and place. And that’s before their own bread has even exited the oven.

To Care for Sourdough Starter: Always keep a small amount of starter on the side so you have more for the next batch. Johnson calls the sourdough that he feeds regularly with additional flour and water his starter, and the larger version used in the actual bread dough he calls the levain. When you are getting ready to bake, take a small amount of this starter and feed it into your levain, as shown below. Usually, the levain will take about four to six hours to develop. Here are the ratios and ingredients for your levain:
40 g. (100%) flour
40 g. (100%) water
40 g. (100%) levain

Click here for Brennan Johnson's recipe for Sourdough Bread and recipes for foccacia and crackers.