Season's Eatings: Five celebrated chefs offer their favorite holiday dishes and the recipes to recreate them at your own family gathering 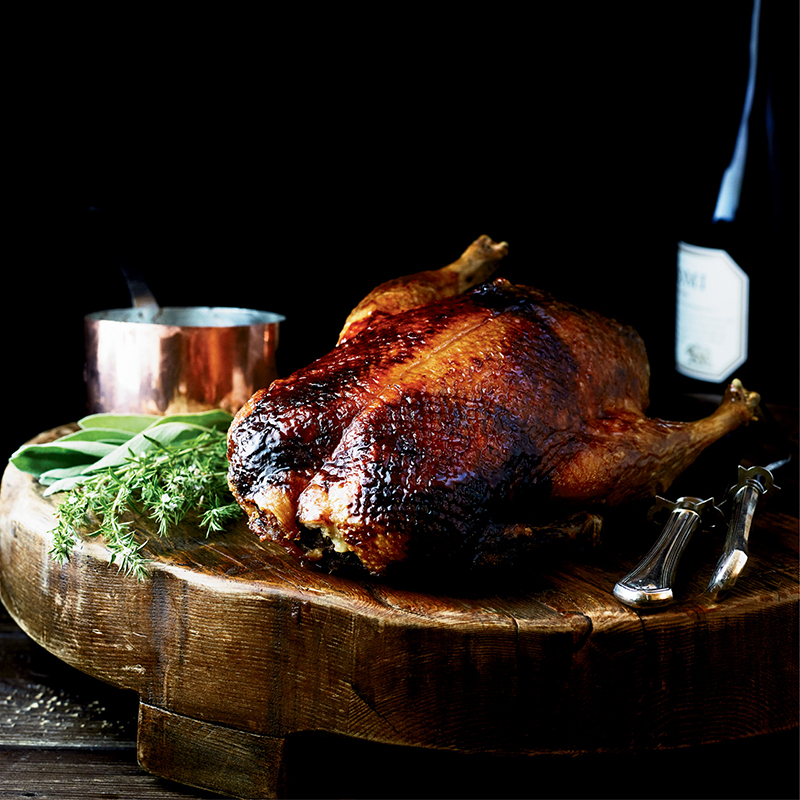 Christmas Duck
{Johannes Klapdohr, Madison’s at Old Edwards Inn}
“Goose would be the classic, traditional bird for the German Christmas Day dinner, but I think duck is more refined,” says German-born Chef Johannes Klapdohr of Madison’s in Highlands. His rendition features star anise- and cinnamon-roasted duck stuffed with a bacon corn bread dressing.
Cranberries, chestnuts, and rustic veggies bring it full flavor. “This dish has very traditional pairings,” says the award-winning chef. “Roasting one dish with all the ingredients together is how people cooked at home for centuries. It is a very simple dish to make, but,” he advises, “make sure you allocate enough time to check on the coloration of the duck.”

Seared Brussels Sprouts
{Michelle Bailey, Season’s at Highland Lake Inn}
Chef Michelle Bailey enjoys a challenge. Earlier this year she won the Fire on the Rock dining competition, leading her team to the win with wild flavor combinations. But back at the restaurant in Flat Rock, the A-B Tech graduate sticks to the more traditional—utilizing produce plucked right off the vine or dug from the dirt in the inn’s gardens.
For the holidays, she’s partial to rustic, flavorful dishes, including this warm salad of shaved Brussels sprouts, pancetta, pecans, roasted butternut squash, and orange segments tossed with a pomegranate vinaigrette. In addition to the possibility of introducing friends and family to a different preparation of ingredients, Bailey maintains this dish “truly embodies all the familiar flavors and aromas of cold weather cooking,” which is one of her favorite aspects of the holidays.

Rabbit Two Ways
{Edwin Bloodworth, Lex 18}
Having spent several years preparing game at Boone’s Gamekeeper Restaurant, Chef Edwin Bloodworth of Lex 18 in Asheville enhances his dishes with Appalachian-grown nuances. Thus for the holidays, he turns to rabbit, offering a rustic first course of the game prepared two ways—as a tender confit and roasted, served with wheat berries and a colorful medley of baby carrots and cranberries.
Rabbit is highly versatile, he says, and now easily found at tailgate markets and farms. “Treat it like chicken—you can roast it, confit it,” he says. When roasting rabbit, he recommends letting it cure for a few hours, as “food is better when preseasoned, so give yourself some time.”

Bacon-wrapped Pork Tenderloin
{William Dissen, The Market Place}
With a new baby at home, Chef William Dissen is all about continuing and beginning family traditions. So for the holidays, Benton’s bacon-wrapped pork loin is typically on his table at home. “Serving a loin of an animal, to me, is for a special occasion,” says Dissen, owner of The Market Place in Asheville and a featured James Beard Chef. “Be it a pork loin or beef tenderloin ... it brings a little nobility to the table.”
A thick pork loin gets the cast-iron pan roasting treatment from Dissen, and is finished with a dense wrapping of Benton’s bacon. He serves the dish with puréed roasted pumpkin and a bright cranberry-orange relish.

Black Forest Cheesecake
{Katie Button , Cúrate & Nightbell}
If you’ve dined at Katie Button’s wildly popular Cúrate or the after-hours Nightbell in Asheville, then you’re aware that the James Beard Rising Star Chef nominee does not do traditional. Known for her molecular gastronomy techniques that she learned apprenticing in Spain at the erstwhile elBulli, Button continues to hone her own deconstructed creations that are part spectacle, part fantasy, and all flavor.
To top off a holiday meal, Button, with collaboration from Nightbell pastry chef Carmen Vaquera, offers a phantasmagoric dessert: a shiny globe of Black Forest cheesecake nestled on a scattering of chocolate and pistachio “soil” and chocolate “twigs.” Despite the complexity, the flavors are a very traditional combination of chocolate, cherries, and pistachios. The candy-apple look was created by freezing silky globes of cheesecake, then flash-freezing them in nitrogen, followed by a dunk in a sour cherry gelée. While only Button and her team can reproduce the deconstructed dessert in all its glory, she offers a special recipe for the home cook.