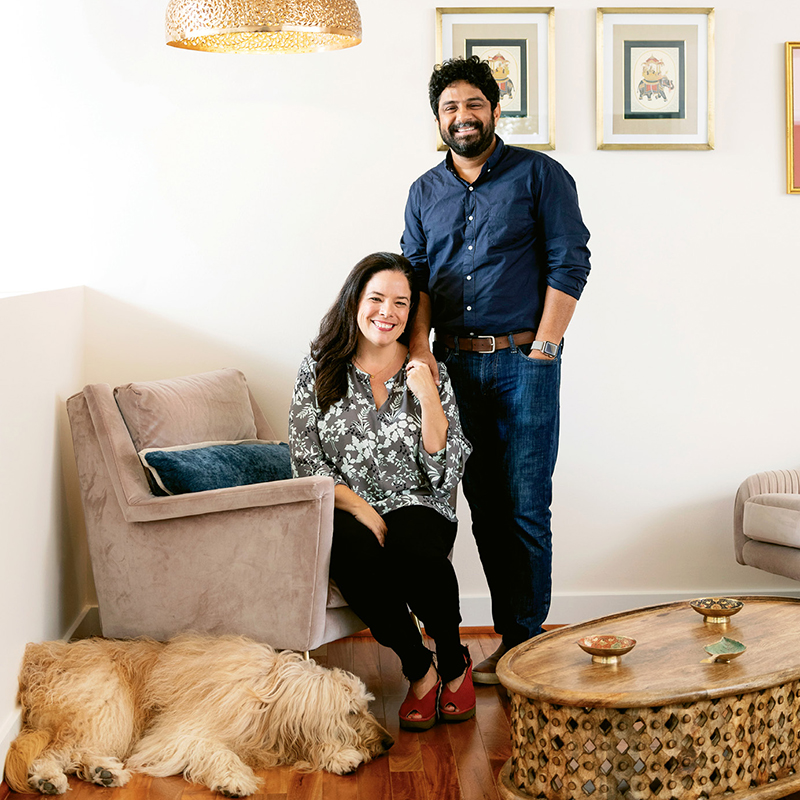 Chef Meherwan Irani’s kitchen buzzes with activity just minutes before guests arrive at his house in Asheville. He and his wife, Molly, spend much of their time overseeing the details and guiding the big-picture growth of the Chai Pani Restaurant Group, but today they’re fixing a Thanksgiving feast for a core team of employees who have become like family during the 10 years since they founded their celebrated Indian street food restaurant, Chai Pani.

The Asheville location kicked off the restaurant group, which has expanded to include a second Chai Pani in Decatur, Georgia, MG Road Indian-themed bar as well as Buxton Hall BBQ in Asheville, Spicewalla spice company, and the latest Indian eatery, Botiwalla in Atlanta. Meherwan is an integral part of the Brown in the South dinner series, which features a tight-knit group of chefs of Indian descent who have made the American South their home, and he’s also earned four James Beard Award nominations for Best Chef in the Southeast. And all of this growth has not gone unnoticed by countless regional and national publications and TV shows.

(From left to right) The dal soup was finished with greens and country ham; The whole snapper, seasoned with selections from Spicewalla, the Iranis’ small-batch spice company; Friendsgiving dinner kicked off with gin and tonics garnished with Spicewalla juniper berries.

Yet Meherwan and Molly’s most meaningful accolade might be the culture they’ve created with their staff, who are gathered here tonight. Molly greets each guest with a big hug while Meherwan moves swiftly around the kitchen. He deftly wraps two whole snappers in banana leaves, letting the fish come to room temp while he rubs a beef rib roast with fennel, rosemary, and a spice that might surprise some traditional Southern cooks.

He slides open a drawer and rifles through a rainbow of tins produced by his small-batch spice company. He runs his fingers over the teal tin of cardamom powder and a hot pink tin of smoked paprika until he finds what he’s looking for to add to the roast—his own garam masala, a blend of nutmeg, clove, cinnamon, green cardamom, and other spices that evoke his childhood in the small town of Ahmednagar in the state of Maharashtra, India.

Meherwan’s route from India to Asheville is as circuitous as the spices. Born in London, he moved to India with his parents when he was four. His mother has always been a guiding force in his relationship with food, but that doesn’t mean he learned how to cook at her knee. He points out that it was uncommon for boys to be in the kitchen and that cooking was considered by some to be a menial task. Becoming a professional chef was not a prized career path for Meherwan and his peers. 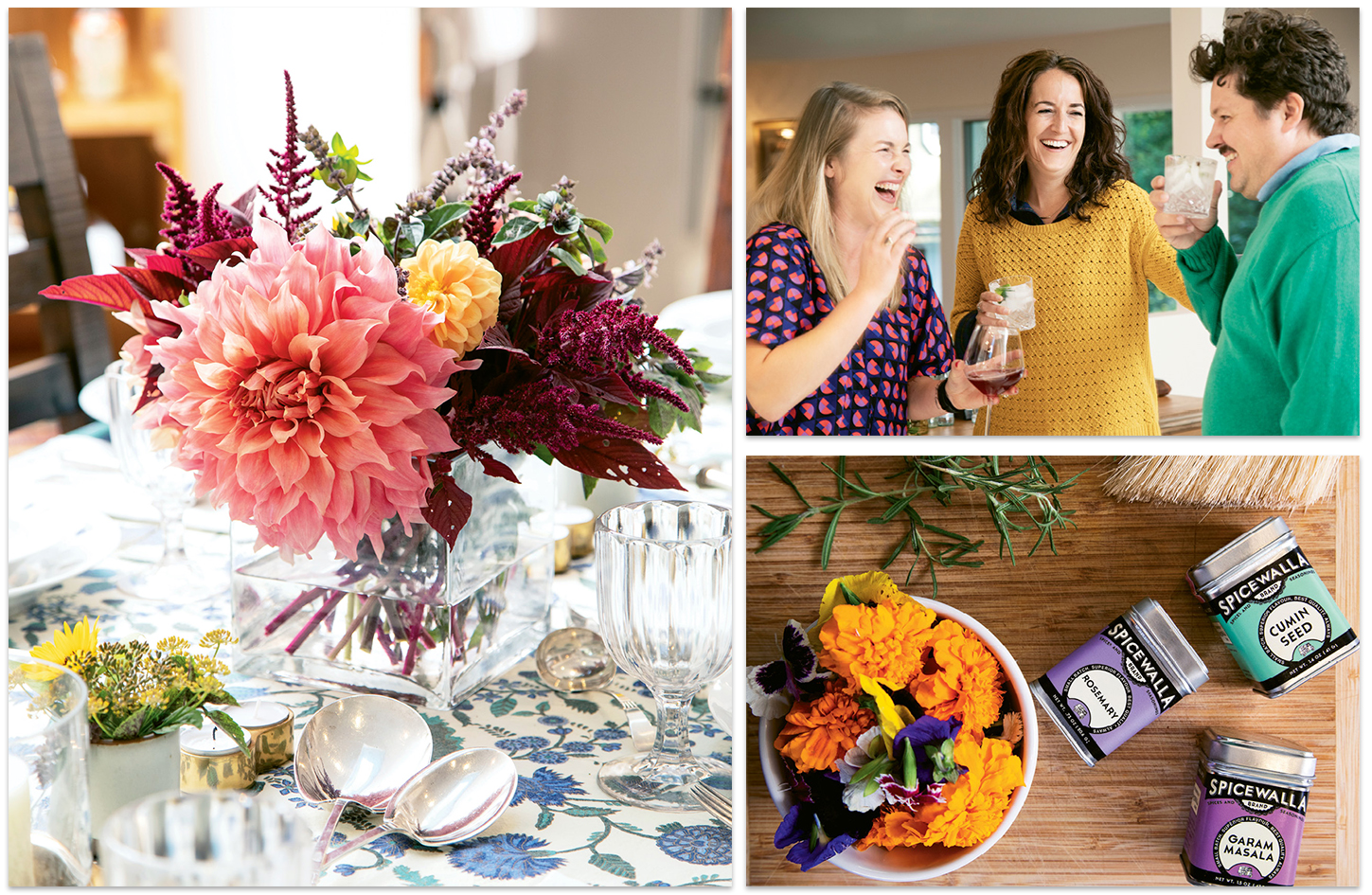 He came to the US in 1990 to attend graduate school at the University of South Carolina in Columbia, and also waited tables at a French pâtisserie in Myrtle Beach, where he met Molly, whose parents owned an award-winning restaurant there. After a stint spent in the Bay Area of California, where they had their daughter in 2002, the couple decided to seek out a quieter place for their family, and Asheville’s laid-back, free-spirited culture fit the bill. Meherwan initially did sales and marketing for car dealerships and later immersed himself in high-end real estate. But when the economy crashed in 2008, he knew he needed to make a change.

The first spark of his flagship restaurant, Chai Pani, came late at night. “I was just mulling it over in bed, reading a book, and I bolted upright,” he remembers. He and Molly stayed up for hours imagining what the restaurant would be like.

They were drawn to the bright colors and flavors of Indian street food, which was a departure from the white tablecloth restaurants that many Americans think of when they go out for Indian fare. They were excited to share the foods that people in India enjoy daily, rather than dishes like chicken tikka masala that are rarely eaten outside of banquet dinners or wedding celebrations. Meherwan and Molly crafted the menu that very night, and Meherwan says about 80 percent of those dishes are still served at Chai Pani today. 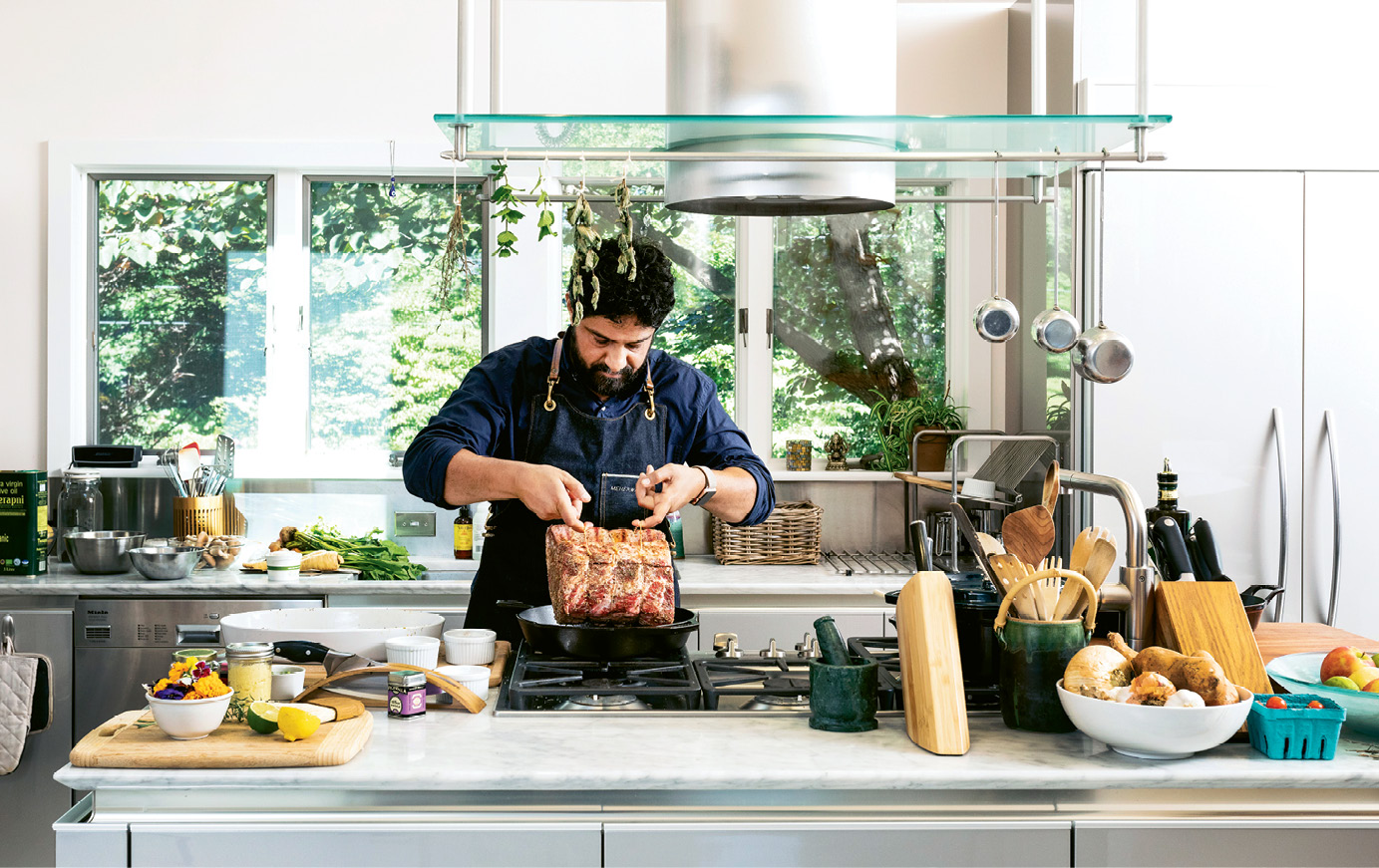 The Irani family dedicated many long days and late nights to the restaurant. Molly points out that they mostly made steamed broccoli and brown rice at home during those early years when time was scarce. They quickly realized that they couldn’t do it alone and sought out employees who could become more than staff; they wanted to create a Chai Pani family.

Now, a decade later, many of those early employees have grown alongside the company, and big Thanksgiving feasts have become a tradition. Since the first year, the Iranis have invited staff who are far away from family—“the lost souls in the kitchen,” says Meherwan—to join them at their house for a “Friendsgiving.”

As guests trickle in, the wine starts to flow, and guests nibble on a mezze platter offering grilled Halloumi cheese and fire-roasted tomatoes, olives, feta, naan, and fresh herbs. Merriment ensues, with the crew laughing and teasing like only family can. “Staying Alive” comes on the stereo and the Iranis can’t keep from dancing.

After Meherwan finishes in the kitchen, the group gathers around the table and kicks the meal off with a cheers, digging first into dal lentil stew with collards and country ham. The soup combines classic Southern ingredients with Indian spices to create a dish that reflects Meherwan’s identity; he is proud of his Indian heritage and also his relationship with the American South. “We’re Southerners,” he declares, “and the South can look like this, too.”

Meherwan sees similarities between certain regions of India and parts of the South. Both cultures prize food made with love and are proud of the regional distinctiveness of their foodways. The Southern Appalachian traditions of preserving food and making humble ingredients taste wonderful reflect a common culture of resourcefulness. “India’s cuisine is necessity- and subsistence-based,” he says. “We made the most with what we had, which was often not much. We knew how to make bitter greens delicious.” 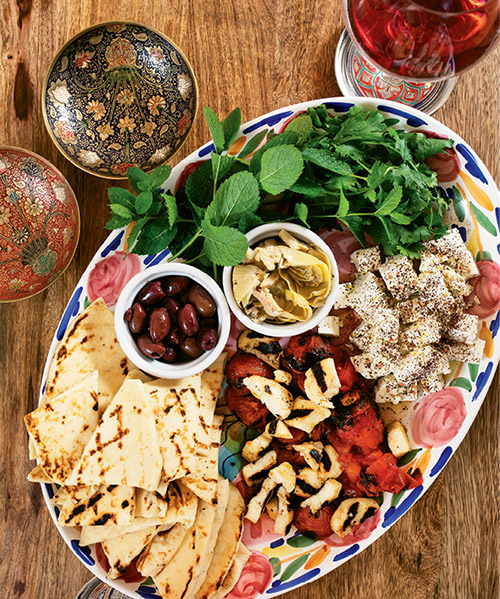 A mezze platter with grilled Halloumi cheese and fire-roasted tomatoes

The collard greens in the soup are indeed tasty, and a perfect entryway into the meal to come. The beef rib roast rubbed with garam masala is a majestic showstopper; grilled fairy tale eggplants stuffed with a ginger, garlic, and garam masala paste are divine; and the fish roasted in banana leaves is tender and surprisingly smoky.

As a sweet potato pie from Buxton Hall is finished off, a feeling of gratitude is palpable. Empty wine glasses and the clattering of dishes mark the end of the night, but people still linger. It’s clear that the patchwork of cultures that make up both India and the American South are reflected in the ways we share food with each other. Passing a plate can turn strangers into friends and friends into family—a way to celebrate our differences and solidify the commonalities that bind us together. 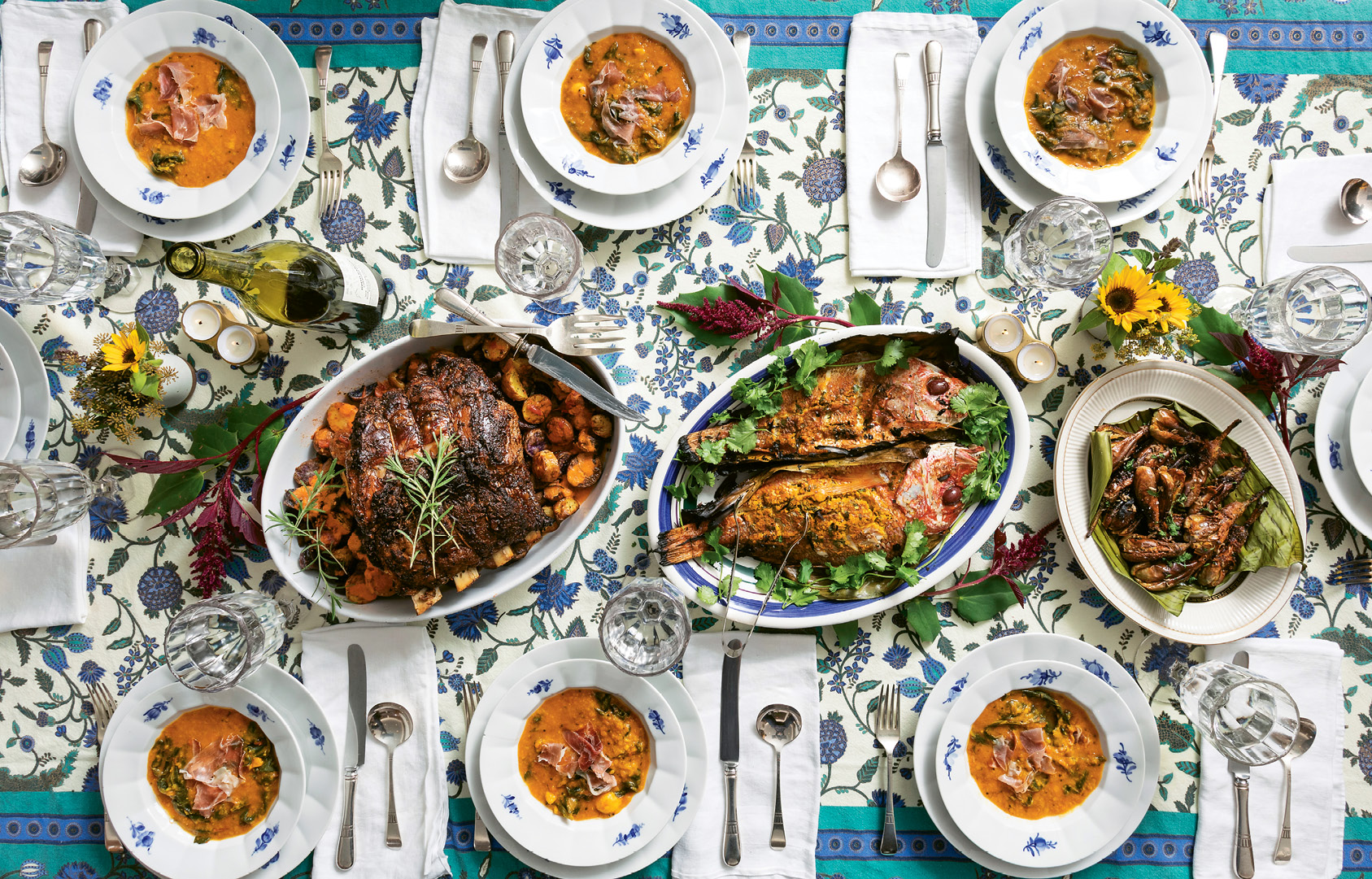 Giving Thanks: A flavorful, spice-infused feast