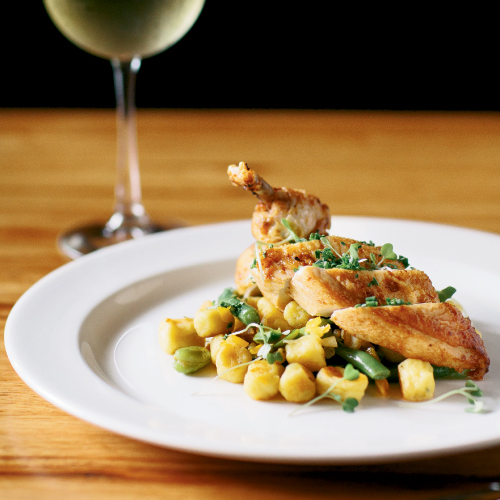 On a chilly evening in Highlands, a long table flanked with high banquette benches near a massive stone fireplace is clearly the coveted spot for diners at Ruka’s Table. Several parties approach the hostess during the course of the night, but the table has been reserved well in advance. Fortunately, most tables still have a view of the roaring fire. Modern cylindrical candleholders cast a subtle glow on the light wood tables. Rich black leather covers the backs of oversized booths, lending an air of contemporary grandeur to the lodge-like dining room and bar.

The most modern addition to this Highland’s restaurant, though, is Chef Justin Burdett, who stepped into the role of executive chef in 2013 after filling that spot at Atlanta’s Miller Union. Burdett refined the repertoire at Ruka’s, introducing reinvented old Southern favorites (that he learned at his grandmother’s elbow) and a penchant for pickling, preserving, and house-made everything, from the mustard to the mayonnaise. He’s pickled items ranging from muscadine grapes, okra, radishes, and squash to rabbits’ tongue.

A starter on tonight’s menu delves into the simple goodness of pork belly, but it’s paired with earthy celery root and the bright tang of pickled raisins. The dish is lightly sweet, with a texture that is part melt-in-your-mouth soft and part satisfyingly dense. Chef Burdett does the classics well, but it is the additions of his Southern heritage sides that truly make the dishes sing.

Fascinated by the kumquat jam served with a pork chop entrée, I inquire about it, and the kitchen kindly provides a sampling, which beautifully accents the chicken breast on rye berries that I ultimately choose. The preserved fruit adds a touch of acidity and floral sweetness that pairs exceptionally well with my dish. Rye berries, a complex nutty grain that mimics wild rice, make a good pairing as well, and a plump little seared onion and delicate microgreens atop the sliced fowl add a refined touch. Burdett’s tattooed, pierced, and plugged countenance almost belie his culinary refinement and referencing of flavors and aromas of the past, but he is fully in fashion with the farm-to-table movement. While he cut his teeth at barbecue joints and simple restaurants as a teenager in rural Georgia, Burdett’s more formal training came at well-regarded locales in Augusta and at Asheville’s Market Place, Table, and the erstwhile Richmond Hill Inn. His innovations garnered first place on the Food Network show Chopped in 2010, and he was nominated for People’s Best Chef, Southeast by Food & Wine in 2013.

A dish he was working on recently, for example, is a play on chicken and dumplings, something his grandmother used to make. Putting his own culinary spin on it, Burdett’s version consists of crispy chicken skin, poached chicken breast, dark chicken meat sausage, pearled carrots, lady peas, and chicken consommé. “I’m working on incorporating a buttermilk biscuit that’s made with lardo [Italian-cured and seasoned fatback] to top it off,” notes Burdett, “but overall, it’s a creative riff on chicken potpie.” The dish will likely remain on the menu throughout the winter.

“This started with the concord grapes from Asheville that I thought would be fun to pickle, and slowly the dish began to form around that focal point of the pickled yellow grapes,” he says, explaining his thought process. “I think about the flavors of the sea with the trout and the squid ink, the brininess verses sugar verses fishiness with the varying ingredients, and then play with the different textures, such as the crunch of the black rice crispies.”

Experimentation on Southern classics continues into the dessert course. The house-made sweets range from banana panna cotta to peach turnovers and blackberry buttermilk buckle cake. I finish with the simple, yet outstanding homemade caramel ice cream, which incorporates a subtle hint of browned sugar and delectable brown butter—completing an evening of new and old South that comingle seamlessly.

The Draw: Lovingly crafted and recreated Southern dishes with bold, modern infusions and techniques
The Drawback: Menu changes frequently, so don’t fall in love with any one item
Don’t Miss: Anything pickled, particularly the more unusual items