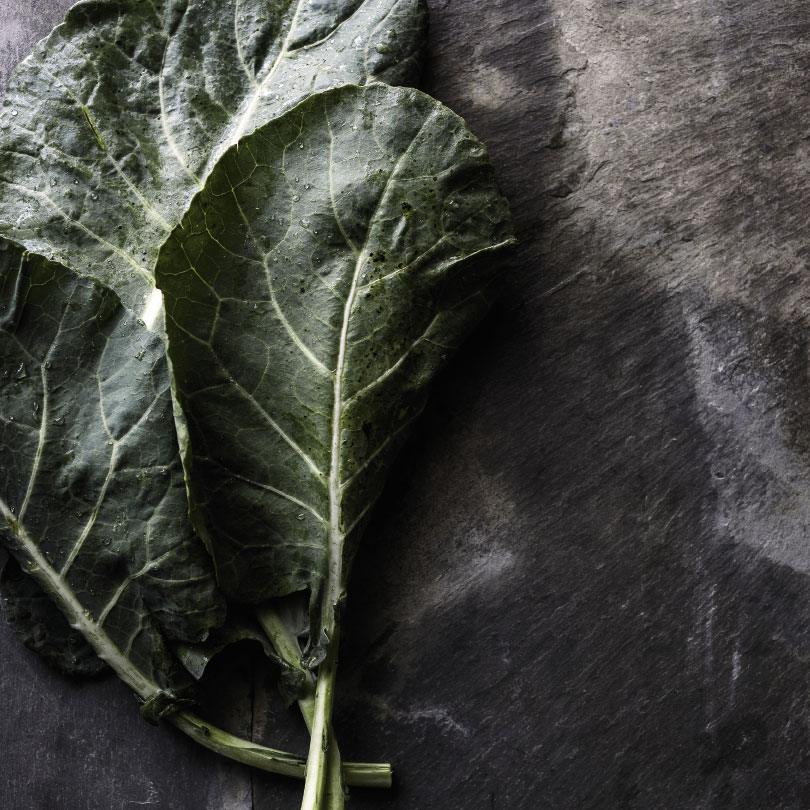 The cuisine of Appalachia—centered around fresh grown produce, hand-picked fruits, long braised meats, rib-sticking cornmeal, and flour-based breads and dumplings—has forever been based on sustainability and necessity. Eat what grows. Store what you can. It was a way of living that developed as a result of the region’s remoteness.

Many area chefs have long been focusing their cuisine toward the shift back to regionalism. With the abundance of local farms in Western North Carolina, and direct contact with farmers and tailgate markets, chefs are elevating and educating with their menus. Here, five top chefs take cues from traditional Appalachian cuisine to create modern renditions that could easily be served in their restaurants and recreated at home.

Provenance: Chef John Fleer transforms traditional collard greens based on taste and texture. The Winston-Salem native’s experience with the traditionally ham hock-steeped, well-cooked collards was mainly through the school lunchroom. Now, it’s one of the recurring sides in his Asheville restaurant. Fleer drew on the multiple origins of this leafy crop for inspiration—grown here by Native Americans, as well as in Africa and used prodigiously by slaves and their descendants. While peanuts and an aromatic peanut oil give a nod to its Southern origins, the resulting dish is redolent with garlic and has a subtly spicy kick and marvelous toothsome texture. “We blanch the collards first, which removes the sulfur that most people don’t like,” says Fleer, “then hot-sauté it in a pan so it still has that crunch and brightness.”

Chef: Andrew Long {Mast Farm Inn & Over Yonder, Valle Crucis}
Provenance: Chef Andrew Long runs the kitchens of two restaurants in Valle Crucis. Traditional comforting chicken ‘n’ dumplings fits perfectly into the repertoire at Over Yonder, while the nearby Mast Farm Inn allows for more adventurous experimentations. Here, Long revamps the humble dish with pheasant and chestnuts. The heavy, saucy, stew-like properties also get a makeover with a more delicate but flavorful broth. Piquant additions like pickled cabbage add bright and layered elements. “Many people in the hollers haven’t changed growing or eating habits at all,” he observes. “As chefs, we have instant access to a multitude of mindfully grown and propagated heirloom products.” To create his twist on a classic, he asked himself two questions: “Are we as cooks pushing creativity while adhering to classic techniques and balance? And is it delicious?”

Provenance: Duane Fernandes crisscrossed the East Coast after culinary school, with time spent at New York City’s Per Se, Charleston’s Peninsula Grill, and locally at Horizons at Grove Park Inn. While leading the kitchen at Isa’s Bistro in Asheville, a love for desserts got the chef thinking about traditional apple turnovers and the deep spices of Appalachian apple stack cake. Fernandes switches up textures from the traditional by using airy phyllo rather than a heavier flour dough. He hearkens back to early Appalachia with chestnuts, and builds a highly contemporary-looking plate that is still rustic in its ingredients. “The traditional flavors are entirely there, just in different form and texture,” explains Fernandes.

Provenance: “Ever since people have been pulling trout out of the creeks and lakes around here, these fish have been dunked in cornmeal and thrown in oil,” says Chef Nate Allen of Knife & Fork in Spruce Pine. “I created something where you can taste more than just cornmeal and oil,” opting instead to dust the fish in a light layer of cornstarch. And rather than a big dollop of butter, Allen uses bacon grease to cook and flavor the grits, adding bacon strips as well. A garnish of trout tartare sprinkled with lemon and basil finishes the dish. “This is truly a representation of what we do all the time. We take something traditional and try to lighten it up.”