Home /Turn the Beet Around

Turn the Beet Around

Turn the Beet Around: Chef Jake Schmidt shines a light on a resplendent root veggie 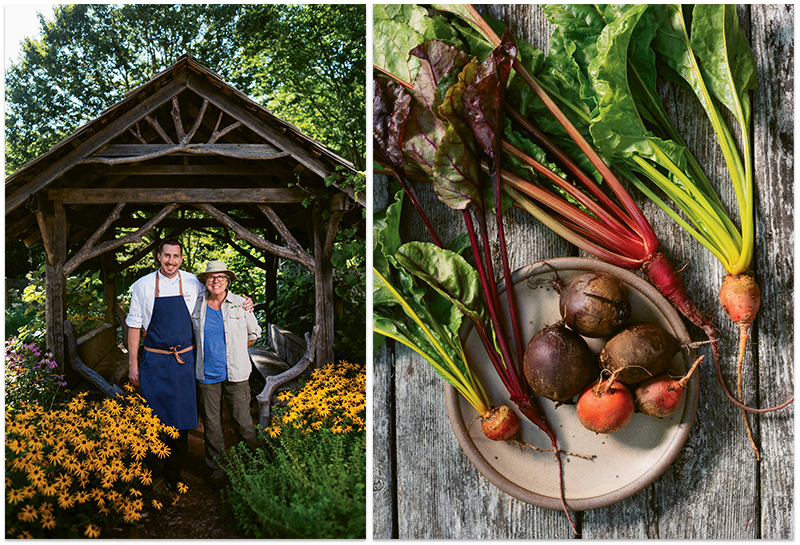 (Left) Chef Jake Schmidt with The Swag’s head gardener, Joyce Griffin, who grows three varieties of beets—red, golden, and the candy striped chioggia—at the inn and restaurant’s on-site garden in Waynesville; (Right) Beets are rich in folate, manganese, potassium, and vitamin B2.

“Beets are my favorite,” says Jake Schmidt, Executive Chef at The Swag in Waynesville, a mountaintop resort where he’s worked since 2017. He loves their versatile, earthy flavor whether they’re raw, roasted, pickled, or puréed into a light summer soup.

Beats, not beets, were part of Schmidt’s initial career path. Growing up in the northern suburbs of Chicago, he originally wanted to be a police officer, but after studying criminal justice in college, he realized it wasn’t for him. So when a friend suggested he try the culinary program at Kendall College in Chicago, Schmidt’s career took off.

Schmidt worked his way to the executive sous chef position at The Signature Room at the 95th in Chicago, then moved to Western North Carolina in 2011 to work at the Omni Grove Park Inn, where he cultivated his appreciation for seasonal food and local sourcing, which he continues at The Swag, where he changes the menu daily.

Schmidt knows that beets sometimes get a bad rap, but that doesn’t deter him from putting this root vegetable on the menu when they’re in season. He says some people think they don’t like beets, perhaps because they’ve never tried them or have only tasted mushy, boiled beets, but he’s on a mission to help people embrace this sweet and savory veggie.

Chef Schmidt has a few recipes to bring out the beet lover in everyone. Try making beet couscous with salmon, or go deep into the earthy flavor of borscht soup served with pink peppercorn crème fraîche and bread and butter pickles. His recipe for roasted beets, which can be enjoyed as a side dish, serves as the base preparation for each of Schmidt’s entrées, including a beet and duck speck salad (recipe online) with peaches and burrata cheese.

Preheat oven to 350°F. In a bowl, toss beets with shallot, garlic, thyme, salt, and pepper. Drizzle with olive oil and add a few ice cubes. Place tossed beets onto a foil-lined baking tray. Top with additional foil, seal into packets, and roast until tender and easily pierced with a knife, about 45 minutes. It’s much easier to peel beets while they are still warm. Gloves are recommended, especially for red beets.

Schmidt’s Borscht features pink peppercorn crème fraîche and bread and butter pickles, while his duck speck salad (right) is made with peaches and burrata.

In a heavy-bottom stainless steel pot with canola oil, sauté onion, carrots, and garlic on medium until carrots are tender. Add cabbage, potatoes, beets, and tomatoes. Sauté until the tomatoes release their juices and add the stock. Simmer for 30 minutes. Transfer to a food processor or blender and blend until smooth. Season with salt and Tabasco. To serve, ladle soup into a bowl. Top with crème fraîche and minced pickles (recipes follow).

Combine cucumbers and salt in a large, shallow bowl. Cover and chill for one and a half hours. Transfer to a colander and rinse thoroughly under cold water. Drain well and return to bowl. Add onion and toss.

In a medium saucepan, combine sugars, vinegars, seeds, and ground turmeric. Bring to a simmer over medium heat, stirring until the sugar dissolves.

Pour the mixture over cucumbers and let stand at room temperature for one hour. Cover and refrigerate for 24 hours. Store remaining pickles in an airtight container in refrigerator for up to one month.

In a bowl, add heavy cream, buttermilk, and salt. Whisk together, cover with cheesecloth, and allow to rest for 24 hours at room temperature. The cream will be slightly soured and thick. 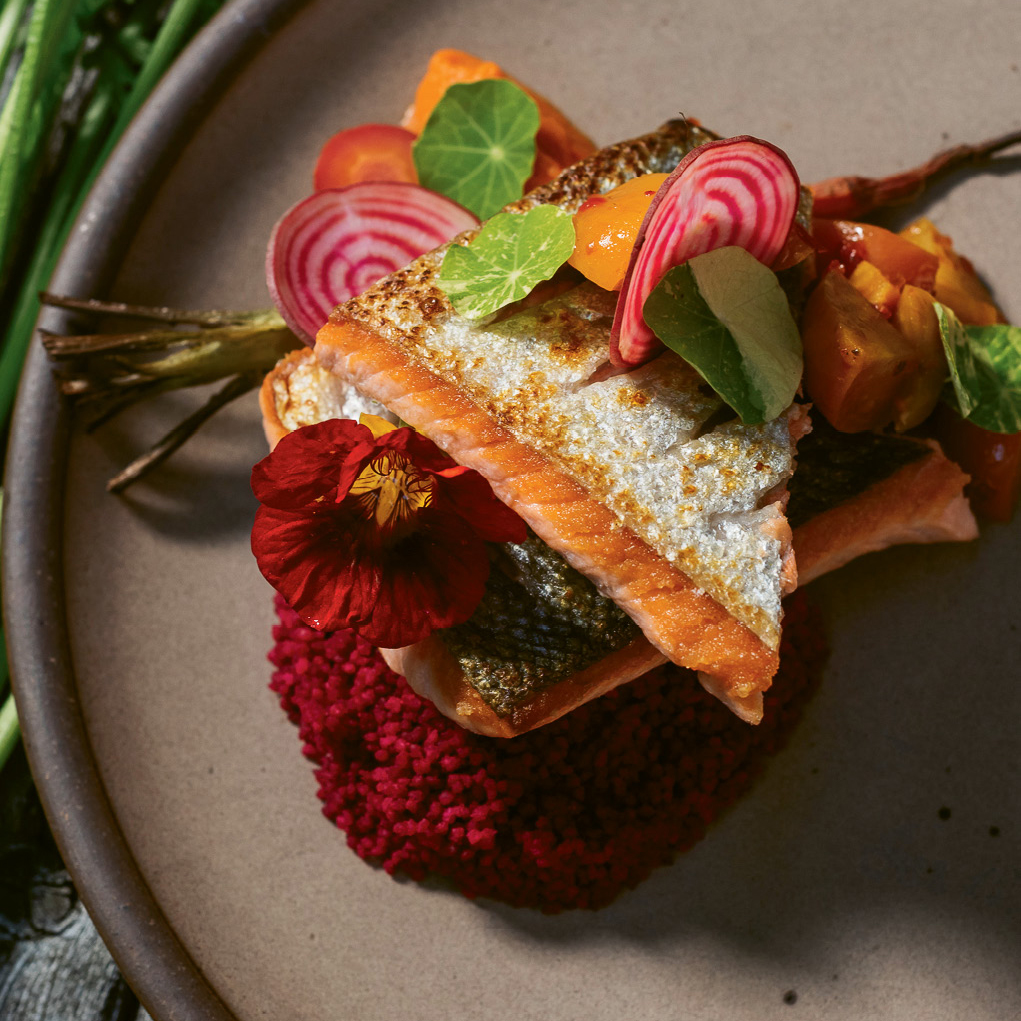 Salmon atop Beet Couscous is served alongside Smoked Carrots and Golden Beet Agrodolce.

Place couscous in a shallow pan or bowl. In a separate pan, bring beet juice to a boil and then pour over couscous. Cover with plastic wrap. After 10 minutes, remove plastic and fluff with a fork. Season with salt and a drizzle of olive oil and incorporate. Keep warm until time to serve.

Rub all carrots with oil, salt, and chili powder. Cook in a smoker at 250°F or on the grill over indirect heat until tender. Reserve the baby carrots. In a food processor, purée the large carrots into a sauce-like consistency (use water or vegetable stock to adjust). Season with salt and chili powder to taste.

In a small bowl, mix agave nectar, sambal, and red wine vinegar. Add olive oil to finish the marinade, and season with salt and pepper. In a larger bowl, combine the beets with the marinade, tossing well. Marinate beets for about four hours. Check seasoning again and adjust as needed.

In a smoking hot nonstick sauté pan, heat canola oil. Season salmon on both sides with salt. Sear the fish on its presentation side. When you see that the fish has cooked around the edges, flip it over, turn off the heat, and allow to finish cooking in the pan.