Home /From Romania with Love

From Romania with Love

From Romania with Love: Georgiana Wenzel expresses her heritage by sharing the foods of her home country 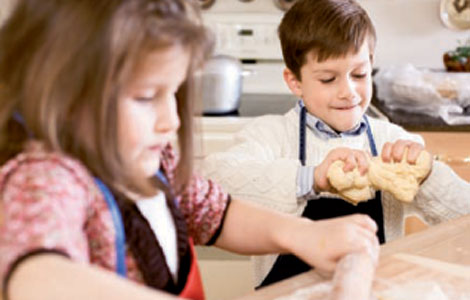 Nothing quells homesickness like the familiar flavors and aromas of a meal rooted in family traditions. So when Georgiana Wenzel left Romania to be with her sweetheart in Waynesville, her first instinct was to introduce his parents to the beloved dishes of her homeland.

Almost 17 years later, she still passes on her heritage through food including in tonight’s menu of stuffed cabbage rolls, polenta, and rum cakes. Today, like on many Sundays, the in-laws are on their way over for dinner at the home she shares with her husband, Chris, an otolaryngologist in Clyde, and their three children, Stephen, Kevin, and Trinity.

The children are in aprons—their hands washed, after-church snacks eaten—and ready to start working with the pale mountain of dough before them, pounding, twirling, kneading, and shaping it into rolls. They know their jobs well—sprinkling poppy seeds, tucking dried cranberries into folds, even twisting the dough into pretty knots. “I know how to do it,” six-year-old Kevin pipes up, molding his portion into a symmetrical crescent as best as his small hands will allow. “It’s like Play-Doh, and I sure know what to do with Play-Doh,” he says, grinning. Brushed with egg yolk, the puffy rolls will later come out of the oven golden brown and smelling of sweet yeast.

“When our family cooks together, it’s a gift that allows us to create and share memories,” explains Georgiana. “It’s all about being happy with simplicity, family, food, tradition, and love.”

Chris appreciates the children embracing their heritage, noting that they even call milk by its Romanian name, lapte. “I would imagine they feel special to have Mommy cook things that other moms don’t,” he says, “and it makes a story for their friends.”

Chris was a Davidson College student working a summer job when he met Georgiana. She was a striking dancer visiting the United States for the first time as part of an ensemble performing in the Folkmoot USA folk dance festival based in Waynesville.

A French major, he was assigned to be the Romanian group’s guide and pinch-hit interpreter. Although the two Romance languages barely resemble one another, Georgiana was able to draw on a few words and phrases from her ballet training to communicate. Love blossomed quickly for the couple, but after the two-week festival ended, Georgiana returned to Romania and Chris began his first year of medical school at Duke University.

They wrote long letters to each other—Chris in English, Georgiana in Romanian—and all the while he was learning her language using tapes and flash cards he carried everywhere. The next year, he flew to Romania and convinced her to return to the United States.

For six months, she lived with his parents, Waynesville surgeon Dr. Frederick Wenzel and his wife, Judy, winning them over with her cheerful personality and exceptional cooking. “There’s a Romanian proverb that says good thoughts always pass first through your stomach,” says the hostess. Today’s main dish, sarmale, is a reprise of what she first cooked for her future in-laws, whom she now calls “mami” and “daddy.”

While the children are busy making the bread, Chris is in the backyard grilling whole eggplants. The process will removed the aubergines’ bitter taste. Twenty minutes later he carries them, now brown and shriveled, into the house where Georgiana expertly peels them while they’re still hot, then mashes and whips the pulp, adding minced onions, salt, and pepper to create a spread, salata de vinete. Once the spread is smooth, she scoops it into a shallow dish and garnishes it with slices of bell pepper and tomato. With a pleasant smoky nuance, the spread complements the slightly sweet bread.

Next up on the grill is mititei, meat rolls seasoned with juniper berries, garlic, and caraway seeds, which serve as satisfying appetizers. Part beef and part pork, they sizzle on the grill. These won’t make it to the table, though. Placed on the kitchen island, they disappear one by one, tiny fingers stealing them as Georgiana turns her attention to another dish.

The sarmale requires the most preparation; cabbage leaves are stuffed with an aromatic mixture of seasoned ground meat, rice, and herbs, before being shaped into rolls. Georgiana takes pride in cooking the ultimate celebratory dish of her country, often served for holiday meals.

Once the sarmale is simmering on the stove, Georgiana finishes layering the polenta with three types of cheeses, feta, Parmesan, and mozzarella, as well as peppers, grape tomatoes, and sausage. “I love when the warm tomatoes burst in your mouth,” she says. Yet not all favorites carry over from one generation to the next. Kevin points out that ma˘ ma˘ liga˘ , or polenta, is his least favorite Romanian dish, and eight-year-old Stephen agrees.

But the polenta has fans among the older generation. Judy and Frederick cultivated an affinity for diverse herbs and hearty meals while living in Germany. “We’ve been enjoying Georgiana’s cooking since we met,” says Chris’ mom.

The hostess has often relied on her visiting parents to bring herbs and dry goods she can’t find here, like Romanian corn meal, which she says has a distinct taste. Still, she often has to settle for substitutions. For instance, Polish sausage will have to do in the polenta, though it’s not as dense and dry as the Romanian meat. “I love to see her get out her Romanian cookbook and succeed in translating the ingredients into what is available in America,” says Chris.

In honor of the family gathering, Chris opens a bottle of stout plum brandy that Georgiana’s father brought when he last visited. He pours the clear elixir into a red, etched crystal decanter, also from the homeland, with matching stemmed glasses. As the clan gathers around the table for the first course, the elder Wenzels toast the hostess they’ve clearly adopted as a daughter.

A bottle of Romanian white, which tastes somewhat like a Riesling, makes its way around the table. The children happily dig into creamy “doubled” eggs, known here as deviled eggs, while Georgiana, never at rest, makes the rounds with the steaming cabbage rolls and then the polenta. The magnificent feta flavor of the latter is foiled by the sweet red peppers that stud the colorful dish. Cabbage leaves stuffed with fluffy rice and savory meat also carry the flavors of tomatoes, dill, and traditional herbs like tei and cindru.

Only the savarina, minicakes soaked in sweet rum syrup, and filled with whipped cream can top this. The children have already snatched theirs and run to the far corners of the house to savor them while they play. But for the adults, the mingling of cultures will continue around the table well past dark on yet another Sunday evening.