Home /A Place of Her Own

A Place of Her Own

A Place of Her Own: At just 18, Chef Michaila Cowles Cosmus welcomes diners to Huckleberry’s in Lake Lure 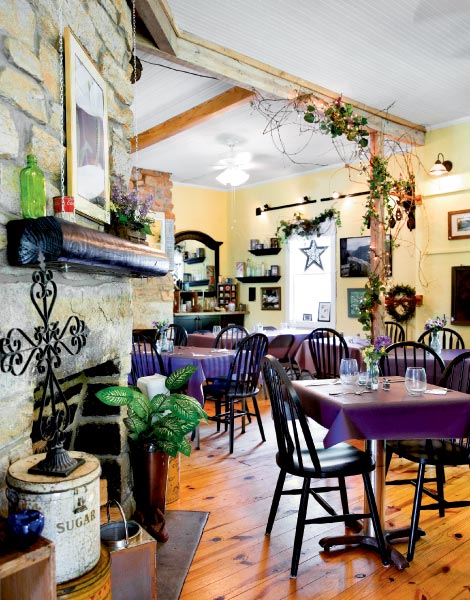 Navigating the kitchen with the confidence of a seasoned culinary pro, Michaila Cowles Cosmus cheerfully instructs the staff of two through preparations for Sunday brunch. It seems a typical restaurant scene, but there is a twist: Michaila is just 18 years old and this is her eatery, Huckleberry’s Restaurant & Bakery in Lake Lure.

At 16, an age when most teenagers are fretting about school exams and driver’s license tests, Michaila was launching Huckleberry’s Bakery, the precursor to her full-blown restaurant. Working largely on kitchen equipment that had been donated, she turned out her first professional batches of “cupboard cookies,” a recipe she came up with as a child using whatever ingredients she found in the cabinets—nuts, raisins, caramels.

Her initial customers gave her creations high marks, but the bakery business built slowly, her mother remembers. “There were days when she made $10,” Christine Cowles says. Still, Michaila was determined, and any profits went back into the endeavor. “Every time she made money, she would buy another spoon or cake pan.”

Michaila got creative when it came to bringing in new equipment for the kitchen. When she found out a family friend had a large restaurant-grade stove he no longer needed, she talked her way into acquiring it. Earlier this year, when it came time to expand the restaurant’s offerings, she bartered for a dishwasher.

Today, Michaila holds a culinary degree from Johnson & Wales University, and is among the school’s youngest graduates. She will return in the fall to study baking and pastry arts. While in school, she spends Monday through Thursday at the university’s Charlotte campus, and then comes home to Lake Lure to put in 14-hour days at the restaurant over the weekend. When she’s baking, her day begins as early as 5 a.m. And many nights she’s there until the last diner has finished dessert.

Looking back, her mother recognizes the signs of a budding chef. “When most kids were outside, she was playing with pots and pans in the kitchen,” Christine says.

The summers Michaila spent with her grandparents in Florida reinforced her love of cooking. “We cooked all the time,” Michaila. “We’d do a lot of baking, but one of our main things, being Polish and Italian, was making pierogies. At first, it was just about playing with the dough, but as I got older, it was about spending time with my grandmother. I got to hear a bunch of family stories.”

The young chef’s early culinary experimentations became the subject of a few tales themselves. One of the first dishes she cooked solo at age eight was meatloaf. The family sat down to supper, lifted their forks, tasted, and then looked at each other. What was that flavor?

“I had taken down all the seasonings that had pretty colored tops,” Michaila says, breaking into a laugh. And the colors she liked best that day glazed the lids of cinnamon and nutmeg jars. Her family still teases her about it. “When something doesn’t turn out right, they’ll say ‘did you bake with pretty colors today?’” she says.

“We had many experimental dinners like that,” her mother says. “Some were quite good. And some we moved around on our plates. I’ve never seen Michaila follow a recipe true to form.”

Huckleberry’s began offering breakfast and lunch in 2012. And Executive Chef Steven Capone joined the team earlier this year to add dinner and brunch service. The handful of entrées on the dinner menu are dictated by what’s in season. Two of the latest additions are a mustard-encrusted rack of lamb and a chicken roulade stuffed with Gruyere, spinach, and prosciutto.

Prepping for the day with employees Tim Eazor and Jackie Simmons, Michaila offers advice on simmering and roasting vegetables for a chicken, pepper, onion, and Parmesan quiche. A large pot of chicken stock simmers on the stove, filling the kitchen with a comforting aroma, contributing to the homey vibe in the kitchen.

“Want to try one of Tim’s zucchini cookies?” Michaila says, holding out a tray of warm treats. She and the crew, including younger sister, Julia, who waits tables, take a taste. She rolls its flavors over her tongue and decides it needs a topping. She considers chocolate ganache, then opts for maple glaze. “This is wonderful,” she says. “We’ll put it on the menu for next Sunday.”