The Glass Menagerie: This community of glass artists didn’t suddenly appear. It was shaped and molded by the nearby Penland School of Crafts 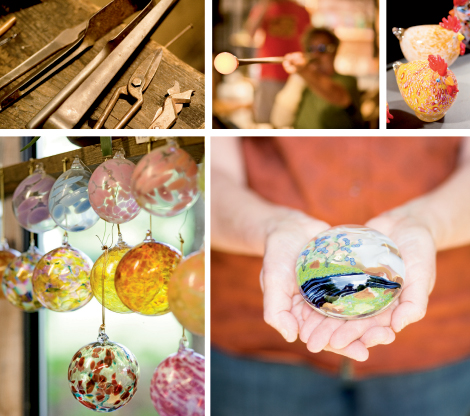 There is a light that plays along the Black Mountains of Western North Carolina. It inspires a rich culture of glass artists along the Toe River. Dotting the landscape from Spruce Pine to Burnsville, many of them have become nationally and internationally renowned. Yet the wildness remains in them and in their work. They came here as students or teachers at the Penland School of Crafts—expecting to stay a short while but instead founded an abiding legacy.

“Historically, glass blowers tend to gather where raw ingredients exist,” says Billy Bernstein, a glass artist living in the South Toe area of Burnsville. “Silica, sand, calcia, limestone, ash, wood, potash, and fuel. Here, we have many of the minerals­—the elements —essential for our creations.”

It doesn’t hurt to have one of the top glass-blowing schools on the East Coast, either. For decades, Penland School of Crafts has attracted artists to learn and share ideas. Some have moved on after their studies, but others, like Billy, chose to stay, developing their craft and a tight-knit community around the school.

“I came from Chicago during a rough time,” says Mark Peiser, an internationally known glass artist. “My friends literally got killed in the streets. My first night here in North Carolina, I spent six hours staring at the meadow. The first three or four nights, I couldn’t stop staring. When I built that studio, I felt like I was building in heaven.”

Peiser’s work has been purchased by many museums and galleries, including the Smithsonian Institution and museums in Denmark, Japan, and Switzerland. His techniques, such as the creation of the four-pot furnace, have changed how thousands of artists develop their own works. He began in a place quite different from the technologically brilliant, state-of-the-art studio that he has now.

“I worked in a Penland studio in 1967 and ’68 that was very humble—a sand floor, four by fours, and a tin roof,” Peiser says. “I was learning to blow glass in this hot furnace, with the snow blowing in my face. Cows would lean in and stare at me.”

Peiser had been an industrial designer in Chicago, but fell in love with this area, and, after only three days of classes, soon persuaded Penland director Bill Brown to let him become the school’s first resident artist specializing in glass.

“The next year, I built a resident studio. Craftsmen could build private studios on the property, tax-free, and work on school land. I never trusted success, though. I built the studio so that if the bubble burst, I could live in it.”

The bubble never burst, and Peiser’s career took off when his glass paperweights became popular—what would be the first among many series in a career spanning four decades.

And even though many traditions in this art have been carefully guarded secrets for thousands of years, Peiser and Billy decided to found the Glass Art Society so they could develop their artistry together. In 1971, twenty-five artists got together to swap stories and ideas. That congenial gathering has grown into an international organization with thousands of members, and annual conferences as far away as Australia and the Netherlands.

“I made all my equipment back then,” Peiser says. “It was very primitive.” For example, he regulated the temperature of the oven by holding its door open using bricks. “In the beginning, it didn’t take any really tricky ideas to make vast improvements. I couldn’t buy tools commercially, so I had to make them in order to create the pieces I envisioned.”

Many of the glass artists have followed a similar path, learning from the challenges, creating special tools to shape the molten material in a way that expresses their perceptions and imaginings. Some of them toil alone, and others work together.

Billy and his wife, Katherine, started a studio in the South Toe River Valley. Katherine has been painting on glass ever since former Penland teacher Harvey Littleton—another Spruce Pine transplant and one of the country’s foremost authorities on studio glass—suggested she give it a try.

Katherine adorns her blown-glass mugs, lamps, and other functional pieces with playfully painted Picasso-esque faces or gestural elements from nature, such as leaves. “The faces on the glass started as doodles,” she says. “No matter how we try to change, everyone always wants more of those faces.”

She and Billy work in tandem—melting and spinning. The bright flames intensify and the liquid glass quivers as if it were alive. The glassblower whispers deep breaths into a long tube, and the symmetry emerges. As he rolls the rod back and forth, Billy holds a wet, wadded newspaper in his hand to shape the glowing bubble. And soon a whimsical goblet emerges.

“It’s exciting to get stuff out of the oven,” Katherine says. “It’s always exciting, not dangerous. I burn myself on my kitchen oven way more than I do here.”

The Bernsteins have raised their family in the South Toe River Valley. One son is a doctor and the other has become a glass artist in Asheville. Many artists who came for a class or a visit have started their own multigenerational legacies. 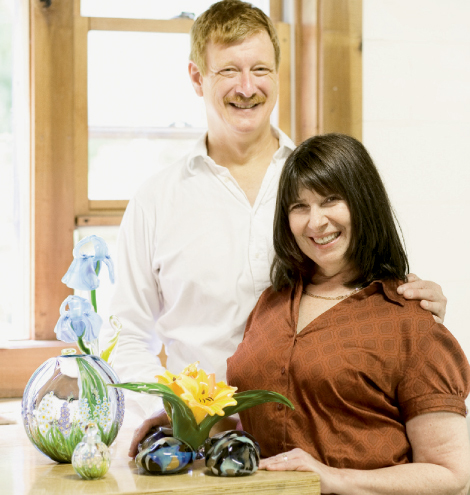 Rob Levin came to Penland for a clay class and tried glass blowing on a whim. That whim became his life’s work for decades. Like the Bernsteins, he and his wife of 40 years, Wanda, raised their children here. He became enchanted with Appalachian music, and is also a noted musician—just like one of his twin daughters, Hannah.
“In this area, we’ve plopped down among people who’ve been rooted here for generations,” Levin says. “With my grandson here now, I’m the first of three generations in this area, so we’ve become the roots for a newborn tradition.”

His work includes funeral urns, vases, and exquisite glass ornaments. “I start thinking I know where I want to go in my work, but in the process, I create a whole new destination,” Levin says. “It’s the way life unfolds, too. I spend my time creating problems for myself to solve, challenging myself. This creativity helps me emerge with something even better than the original vision. Glass, like life, changes as it’s challenged. I feel very lucky and contented to be able to live this way and do the work I do.”

Contentment characterizes the lives of Yaffa and Jeff Todd, too, who came here as the next generation of glass artists. Jeff first came to Penland as a youngster with his mother, fiber artist Louise Todd Coe, who taught classes here. He later met Yaffa, who had started as a graduate assistant to Peiser, and later decided to start her own workshop.

“It was my dream to stay here and blow glass,” Yaffa says happily. “I was building my studio, and Jeff was a blacksmith. He came and asked me if he could help, and he never left. He brought lasagna— homemade all the way to his homegrown tomatoes. We’re a Penland love story, married in 1985 with kids.”

Yaffa, like Levin and other glass artists, makes her own colors from secret blends. She still uses the chemical recipe for glass that she created while working with Peiser.

The recipes might be the same, but having a family changed the artists’ work. They wanted to be able to leave the studio when school ended so they could spend time as a family.

“We used to do large pieces, with 14 hours of hot work together, but with kids, we had to do things in stages so we could stop and be with them,” Jeff says. They develop ideas by creating together.

“Jeff and I woke up one morning and saw little wild purple irises on a hillside,” Yaffa says. “We went into our studio, took a goblet and cut it to get an iris shape out of the crystal. Soon we added a stem, colors, roots, rhizomes. The idea kept growing.”

The artists all agree that inspiration naturally emanates from their surroundings, the brilliant colors of the autumn leaves and the bright greens of spring.

“I try to take a walk through the woods every day,” Levin says. “It helps me think more clearly about my work. Certain aspects resonate, like walking along a river. Glass heats to a liquid, like water flowing.”

But what shapes that glass is skill and imagination, two attributes that move to and from the Penland School—the center of this community. Having been drawn here so long ago to learn, they’ve found the livelihoods they were seeking.

“I was casting a large-scale piece that took six to seven months,” Peiser says, noting that this process is 2,000 years old. “It’s hard, exhausting, and frustrating at times, but for 40 years, I’ve done exactly what I’ve wanted to do.”