The Fresh Perspective: Tryon chef Keith Snow takes his message about cooking with local and seasonal foods from the Internet to PBS 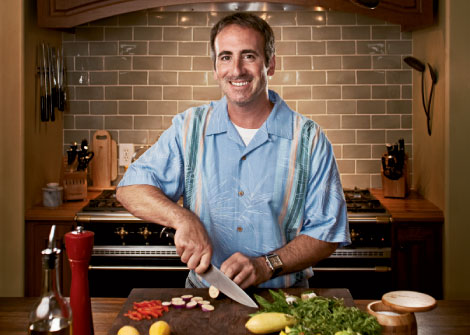 Just a few weeks ago, Keith Snow was crammed in a tiny commercial kitchen in Dijon, France, with about 10 other chefs, preparing a meal for 500 people. The scene was chaotic and hot. There were boxes of what seemed like random produce in the room, and each chef laid claim to whatever they could grab. “It was kind of like that TV show Iron Chef,” he jokes. The organizers, for whatever reason, didn’t tell the chefs what ingredients would be available until it was time to cook. “So we had to make up our dishes on the spot.”

But he wasn’t enrolled in a reality television contest, rather he was taking part in a five-day cultural exchange event, where French audiences got a chance to taste the latest in American cuisine—and the crowd literally ate it up. That day, the chefs served their creations in a street fair setting. All 500 plates of Snow’s pine-nut baba ghanoush with local pear and apricot compote over fresh-baked baguette were devoured in a couple of hours. He spent the rest of the trip meeting with other chefs, being interviewed, touring the Tefal cookware factory, and, of course, cooking.

It was another busy trip in what’s been a hectic year—one that won’t get any slower when his new cooking show, Harvest Eating, hits the air next month.

With a popular multimedia cooking website, YouTube’s National Restaurant Association Hot Chef 2008 Award to his credit, and a series that just finished taping its first 12 episodes, Snow is poised to become a household name. He is on a mission to get his neighbors, friends, and a national audience to understand that eating seasonal, local food made in your own kitchen can be easy, tasty, and kind on your wallet.

Home again
It was the ’90s when Keith first visited Western North Carolina. He and his future wife, Sonja, were avid mountain bikers living in Boston when they made a trip and fell in love with the area. Keith owned Capone’s All-Natural Sauces, and Sonja was a physical therapist. The couple moved south and found a small apartment in Asheville. He took a position cooking at Biltmore Estate and soon developed a reputation for his talent in the kitchen.

In 2000, Copper Mountain, a Colorado ski resort located 75 miles west of Denver in the Rocky Mountains, lured him away from Appalachia and into the higher echelons of executive chefdom. He was in charge of a staff of 12 chefs, 250 employees, and nearly $10 million in food and beverage sales. The resort had multiple restaurants, which allowed Snow to explore diverse cooking styles, yet he didn’t find the massive responsibility professionally fulfilling.
Through the years, Keith had been called upon to learn cuisines as varied as Southwestern to Szechuan, and yet, he had not felt an

affinity for any single style. “When people found out I was a chef, they would always ask, ‘What’s your specialty? What style of food do you cook?’ The question always irritated me, because although I have Italian heritage, I never had a style of cooking,” Snow says.

He and Sonja began to dread the harsh winters in the Rockies and thought about a more traditional country lifestyle after the birth of their first child, Olivia.

“We were living at about 9,000 feet of elevation,” he says. “If that poor little girl left the house in the cold, we’d have to bundle her up so much that she couldn’t move—you could barely stuff her into the car seat.”
The couple wanted to return to the greenery of Western North Carolina. For Keith, who had fond memories of his uncle’s farm in New York, the idea of raising his family in a rural area was appealing. So after buying their Tryon farm on the spot, the Snows moved into an 800-square-foot apartment in a barn on the property.

Immediately, he set off to figure out this farm thing. He began by planting a garden, joining a community-supported agriculture program and other co-ops, and started to meet local farmers. He had chickens, tried milking goats, and there were successes and failures in the garden. Snow started to glean knowledge from his community while learning through trial and error. The family sold the chickens and the goat went to a local cheese maker, but the gardens kept expanding.

Farm to Family
“We realized as soon as Olivia started eating solid food that we were responsible for the future eating habits of this little person,” he says. His first foray onto the Internet grew from developing healthy baby food and other family-friendly recipes for friends. My Family Table soon developed into a TV pilot. As a frequent guest on morning news programs in Colorado, Keith was already comfortable in front of the camera. PBS offered to air the show as long as Keith could drum up the financial backing for its production. “I was so excited. Some of the guys at a television station told me they’d never seen a show get picked up so quickly” he says. But he soon learned that companies were reluctant to sponsor a TV show featuring a chef no one had heard of before. Keith was forced to scrap the project.

Still, through the process, he had found his culinary style. “Living here, going to the markets, and talking to other farmers and gardeners, I started creating dishes around what’s available and fresh right now,” he says. “The cookery of local and seasonal ingredients became my thing, and once I started cooking with them, I developed a discipline.”

He’s created a prolific collection of seasonal recipes that draw upon the many types of cuisine he’s worked in. “Variety helps people become better cooks, because it is key to practice. If you cook the same thing all year long, your skills won’t improve.”

He launched a new website, harvesteating.com, with the intent of sharing his new appreciation for eating locally grown fare. In 2006, he started shooting cooking videos in his kitchen and posting them on his site. Regular visitors and subscribers to a weekly newsletter followed.

But he’s not just creating the recipes and standing in front of the camera: There’s constant interaction with his audience. “I’m almost always responding to e-mails from visitors,” he says. “People sometimes are surprised that I’m actually the one responding to them.” But he recognizes that personal connection as part of his success.

Now with a small staff, he supplies regular content, shooting 30 to 50 videos each month. Harvesteating.com maintains a growing list of more than 20,000 subscribers in 100 countries, and his videos are available for syndication.

Take Two
Keith decided to give television another try. Once again, PBS offered him a spot, provided he could find the financial backing. This time, he made his pitch with a solid fan base already in place, a book in production, and a track record of connecting with audiences. Health-food maker Kashi signed up to support the first season of Harvest Eating, which debuts in October.

He no longer tapes his videos in the barn apartment. The family built a house on the property a couple of years ago. His new kitchen doubles as his work space, serving as the studio for both the web and show. The space stands out from typical kitchens because of the sheer amount of cooking equipment it houses (that and the high-wattage production lighting gear that hangs over the island). There’s a pair of high-end dishwashers, every size pot and pan you can imagine needing, griddles, immersion blenders, dishes and bowls of practically every color and style, as well as an arsenal of spoons, ladles, and tongs. Taping a cooking show is complicated and expensive business, so shooting in his house actually helps cut production costs.

“The only downside of having all this new equipment is that everything beeps,” he admits with a laugh. “Whenever the dishwashers finish their drying cycle, they beep. If I don’t close the refrigerator door all the way, it beeps.” Cut! Start over.

But that’s an annoyance he’s happy to live with, considering the show allows him to do what he loves most. Each episode, he visits artisan food producers and other dedicated people—including many WNC farmers, as well as others across the Southeast—who provide healthy foods, fresh from the source.
“I get very involved in the TV production,” says Snow. “I am involved with what cameras we buy,” and, pointing to the lighting grid over the kitchen island, “I built that with the producer of the show.”

“I get to control a lot of it, but having it under my roof, I get to practice what I preach,” he says.

No one in the Snow household ever goes hungry. The family consumes a constant stream of leftovers, and although they’re great, fresh, and healthy, he admits they might not always pair up to make a traditional meal. They might have fresh fish, chicken, a couple of rice dishes and multiple vegetables, all pieces, and parts of the past days’ tapings. And what isn’t eaten goes into the compost tumbler, making great soil for the next season of food to be grown, cooked, filmed, and eaten.

His next professional step is to teach what he calls cookinomics, the art of preserving all that local food you find at markets and harvest from your garden. Harvesteating.com will soon start featuring content that will help make the process accessible—canning vegetables, drying herbs, and other practices under the home economics umbrella.

“My goal is to make seasonal cooking easy,” Snow says, “I want to give my viewers real-world tools that work for seasonal foods on a year-round basis.” And if he can improvise a meal for 500 french gourmands in an unfamiliar kitchen, using only the ingredients that’s just been given to him, maybe he can improve your game in the kitchen, too.