The Breakfast Club: An outdoors-loving couple raise the bar for campsite cooking 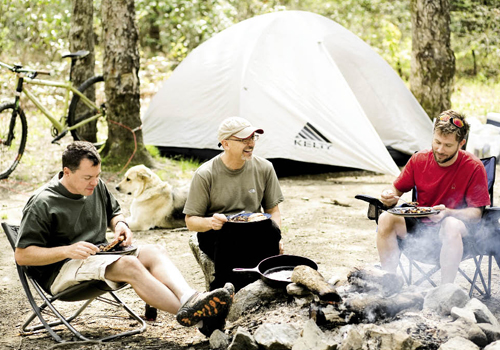 In the mountains, the summer heat doesn’t filter through the trees until mid-morning. By then, all devoted hikers and mountain bikers are already out on the trails. And the true camping veterans are savvy enough to fuel up for their excursion with a breakfast more satisfying than a bowl of oatmeal or a granola bar.

Sue Devitt and Tom Gallo are among those outdoorsy folks who’ve honed their campsite culinary skills, having spent countless weekends camping and biking since they met six years ago. So with a little planning and a free weekend ahead, the couple gathered a group of biking buddies for a getaway in Pisgah National Forest to clear the mind.

“Two days here are like two weeks somewhere else,” says Tom, motioning to the burbling creek near the campsite and the canopy of trees. “When you’re home, there’s always something to do. But out camping you can’t do any of that, so you have to relax.”

Accompanied by friends Ben Butler, Jeff Brown, and Jeff Dingus, and three dogs, including Elwood, who loves to run alongside the cyclists on the trails, the couple make a clearing the staging area for the breakfast that will fuel the group through a four-hour ride.

Planning and at-home prep work were the keys to today’s morning meal. And for this group of friends, easy cooking allows them to spend more time exploring. Before leaving the city, Sue cooked and mashed sweet potatoes for the pancake batter, boiled the quinoa for a salad, and carefully packed the cold ingredients in coolers.

Among the provisions is the calzone kit Tom and Sue created through their business GalloLea, an organic pizza kit company. The package includes dry dough ingredients and sauce for a quick, easy meal in the forest. Today,  the hearty pastry pockets, filled with cheeses, walnuts, basil, or any number of stuffings, will make for a savory breakfast. Sue, a graphic designer, and Tom, a ceramics engineer, shifted career paths two years ago to collaborate on GalloLea, which was created through Blue Ridge Food Ventures, a small-business incubator in Enka. The packet of sauce that comes in the small kit is Tom’s own Italian-American family recipe.

“Things just grow,” says Sue of the business, as she adds water to the whole wheat dough mix and begins to stir. “Tom was always making pizza, and folks said ‘you need to open your own restaurant.’ ” But “we didn’t want to do that,” she says, noting the long hours and near 24-7 commitment needed to run a successful restaurant. Instead, they went the small-business route, selling their kits at local grocery stores and farmers markets.

Tom has already built a fire, and heats water in an enamel coffee pot atop the burning embers. He’s making a dark French roast in a coffee press. Since the group secured a campsite with parking nearby, they were able to bring plenty of fresh drinking water, as well as the partially prepped foods. The large plastic tubs used to carry in condiments, dishes, and cutlery double as work stations, and make it easy to return the food to the cars to keep hungry bears away.

After setting the dough aside to rest, Sue dices blue, red, and white potatoes, and onions, which will be added to the skillet with sausage from Hickory Nut Gap Farm for the hearty blue flannel hash. On occasion, she makes a vegetarian version with local tempeh, fennel, and soy sauce mixed with  the potatoes.

The ingredients go into the deep, cast-iron pan, which has been heating over the fire with a touch of olive oil. The scent of frying onions draws the others away from bike maintenance and gear checks to gather around the fire in the damp morning air.

Placed in a pretty ceramic dish and covered, the hash will stay warm while the calzones go into the pan. The dough, which was set aside to rest, has expanded slightly, and stretches easily around the bulk of two types of cheeses, chopped walnuts, and mashed sweet potatoes. Another calzone gets a liberal amount of spinach and basil. Once the sides have been pinched together, the nifty pockets hit the hot skillet. The calzones must be watched carefully because they brown quickly.

“Come and get it,” someone intones, and in no time each camper is digging in while the cheesy insides are still hot. Sue has moved on to mixing the pancake batter, which is thick with mashed sweet potatoes. Tom cooks them over the fire, then Sue garnishes them with chopped nuts, sliced bananas, and real maple syrup. The moist, sweet hotcakes become a foil for the savory calzone and hash combo.

Sue tosses precooked quinoa, a complex carbohydrate that is high in protein, with freshly cut oranges, strawberries, and pecans to make a wholesome salad.

As the day slowly grows warmer, the dogs begin wandering off to drink from the nearby stream. Elwood is getting restless, signalling that it’s time to rise from the camp chairs and mount the bikes.

A filling repast, the breakfast provides enough pep to sustain everyone for the long trail ride. Before setting off, they all pitch in to pack the foodstuffs away, including the remaining salad and hash, with the knowledge that back at the campsite, good things await for dinner.