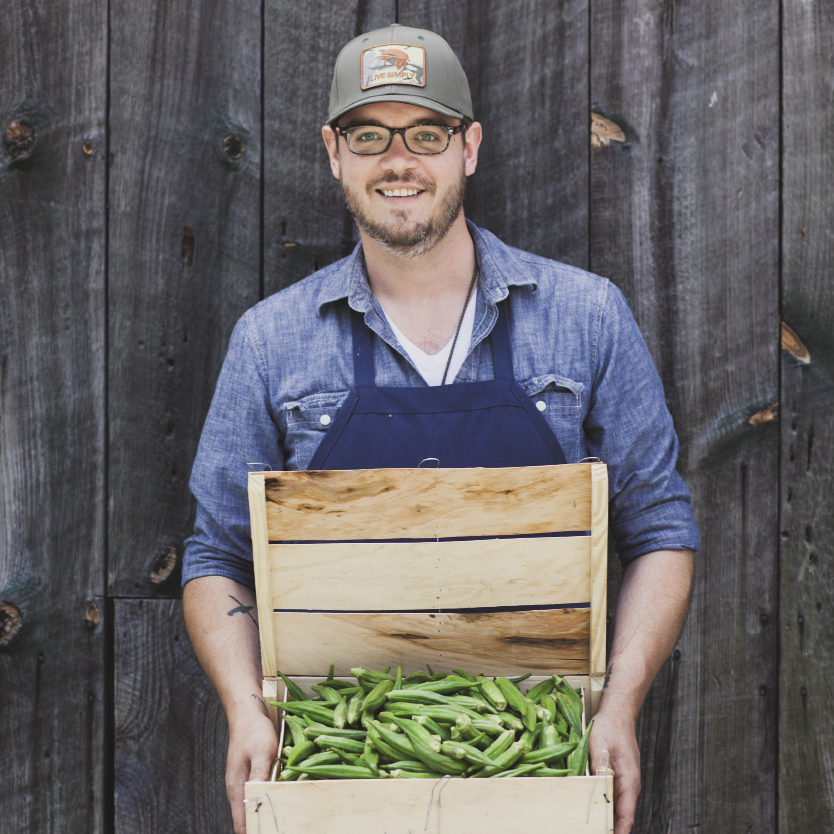 Chef Andrew Long of the mast farm inn & Over Yonder

Favorite Local Ingredient:  Okra
First F&B Gig: Bussing tables and shucking oysters at age 15 in Baton Rouge, Louisiana
Most Challenging Culinary Job:  Working as head chef of an upscale fit camp for kids in Massachusetts; prepared three meals a day for 350 kids and 100 staff members
Education: Johnson & Wales University in Charleston, South Carolina
Cooking Tip for Okra: “If you’re turned off by the slime, try my roasting method; it turns out nice and crisp. And if you call them ‘fries,’ even your kids will eat them.”

Andrew Long is a son of the South, born and raised in Baton Rouge, Louisiana; so it’s no surprise that okra is his favorite summer vegetable. Combined with tomatoes, okra’s flavor imparts “the vibrancy of summer,” says Long, who is the executive chef of the Mast Farm Inn and its sister restaurant, Over Yonder, both in Valle Crucis. It’s just one of many vegetables that are grown on-site at the inn and featured on both restaurants’ menus.

Okra loves hot weather, and when it starts producing, pods must be harvested frequently. “Pick it while it’s young and tender,” says Long, noting that okra gets woody and tough once it grows over six inches.

While the Mast Farm Inn has been serving guests since the late 1800s, Over Yonder, which opened last summer, has quickly gained popularity among local diners. “It’s super casual and the menu is rooted in Appalachian foods,” says Long. “Kind of like going to your grandmother’s for dinner, but actually more like going to your funky aunt’s.”

While his menus change with the seasons they always reflect regional culture. His gumbo, for example, has a distinct Appalachian twist, with local greens and country ham. He also uses a lot of corn, squash, and beans, all grown at the inn’s gardens, which Long’s wife, Megan, manages. “Megan tells me what she’s growing and when it will be ready, and I plan the menu around that,” says Long.

Since pickled vegetables are an important part of the Appalachian diet, they are heavily represented as well, particularly at Over Yonder, where a half-acre pickle garden supports the cause. In addition to pickled okra, Long offers pickled ground cherries and cucamelons, also known as Mexican sour gherkins. His sauerkraut is a nod to another crop that has regional significance: “There used to be a major sauerkraut factory in Boone,” he notes.

But okra remains a top player in his summer menus. As Long puts it, “its taste just reminds you of summer.” Here he shares several of his favorite seasonal recipes.