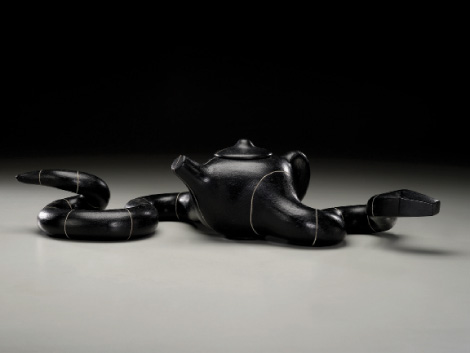 Many artists can point to a formative experience that sent them in the direction of their creative specialties. Kinetic sculptor Sylvie Rosenthal found her calling while enrolled in a program at the Eli Whitney Museum and Workshop in Hamden, Connecticut. She spent her middle and high-school years there building interactive educational projects, studying the experiments of inventors like Whitney and DaVinci to learn how the world works. Most of what she created was done in wood and metal, still the primary materials of her work today.

“I got my first jigsaw when I was 10 years old,” says the 29-year-old proudly while sitting at a German-built woodworker’s table in her Asheville studio. After high school, she took classes in welding but wasn’t interested in finding a 40-hour-per-week tradesman job. So she continued her education at Rochester Institute of Technology’s school of woodworking and furniture design, eventually making her way to Penland School of Crafts, where she participated in a work-study program that helped her hone her creative voice.

At first glance, her work stands out for its polished, exquisitely finished qualities. Mahogany and steel take on soft, elegant, and often animalistic shapes under her guidance, but they also reveal Rosenthal’s sense of humor; she’s an admitted fan of one-liner jokes that don’t get old. One such example is a black, single-bottle liquor cabinet adorned with an animal’s skull. At first, the piece may seem like a grim warning about the evils of drinking, until you realize the skull is a working part of the sculpture. “You ask the skull if it thinks you should have another drink, then turn the crank,” she says. The skull always nods yes, and the cabinet door opens, revealing a bottle of Maker’s Mark.

Some of her other works bear a more introspective tone, like a scale that weighs life’s virtues and vices. It includes a series of 17 dice-size steel weights engraved with words like “love,” “greed,” “temptation,” and “fury.” The user places them on the scale to contemplate how each balances out in their own lives. “Sometimes we need a little more clarity,” she says. “Other times we might want some chaos.” People have often asked her whether each piece weighs the same amount, but they don’t. Because, as she points out, that’s not how the world works.