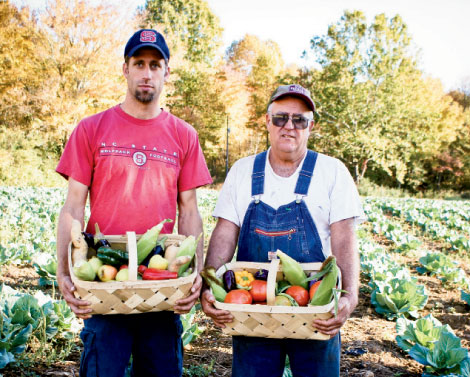 Joe Deal is a hard man to track down. On any given day he can be in one of more than two dozen fields scattered over several sites near Franklin, inspecting heirloom tomatoes or harvesting sorghum cane with a knife once used to bring in burley tobacco. Though he’s most likely to be found selling crates of fresh fruits and vegetables at his family’s produce stand on U.S. 64 east of Franklin.

In 2007, Deal left his post-collegiate job in stream restoration to become a third-generation, full-time farmer alongside his father, Butch. For decades, the Deals planted tomatoes and tobacco. That was until 2004, when a newly deregulated tobacco market sent prices on a free fall. And in its wake, an extreme drought withered crops that were already made more expensive by sky-high fuel and feed costs.

“It’s a bit like playing Russian roulette. Every year it’s something,” he says with a chuckle. But earning a living in farming has never been easy. Add to that a serious economic slump and making a living from farming seems hopeless. Not so. In fact, the Deals have expanded their 400-plus acre operation—the second largest in Macon County.

Growth in a recession may seem surprising, but farmers are accustomed to adapting to the arbitrary twists of the occupation—including a sour economy. Although one of the region’s least predictable livelihoods, farmers here claim that it’s the most gratifying. That explains why farmers don’t easily surrender to the bombardment of challenges that regularly threaten to impede their production.

In times past, burley tobacco was the cash crop in the mountains thanks to a long growing season and high yield per acre. But tobacco has been in decline. In 2004, the federal tobacco price support and supply control program that existed since the Great Depression ended. And with the housing boom of the past decade—and the associated spike in value for WNC acreage—the portion of land devoted to farming has dwindled. In 1970, there were 76,000 farms; today, roughly 12,000. One danger of a weak economy is that it threatens to draw that figure down even further.

Still, consider this: Agriculture in the western part of the state, which is dominated by small family farms, contributes more than $500 million to the regional economy. And many believe that farming in Western North Carolina won’t just survive the economic slump, but may emerge stronger.
For instance, selling locally and directly to customers is a growing, and potentially profitable, strategy in this region. “More and more people are eating at home,” says Joe. “We rely on our local customer. We’re trying to connect with as many of those folks as we can.” To do it, the Deals have focused on stocking two roadside produce stands. The first was opened by Joe’s grandfather in 1951 and the second just last year.

There is also a national movement toward specialty markets, such as grass-fed cattle, hops, and a surge of sustainable organic farms, for which Western North Carolina has an abundance. For a glimpse of this trend, make a trip to the Saturday morning North Asheville tailgate market in a shady parking lot on the UNC Asheville campus. From April to December, you can find a wide selection of locally grown organic vegetables, gourmet goat cheeses, trout caviar, and fresh jams. “People might not be able to afford the larger ticket items, but coming to the market provides a really satisfying shopping experience,” says Paul Littman, an organic farmer in Weaverville and acting manager of the market. “People really want to know where their food is coming from; they’re shopping smarter.”

Littman believes that farmers are selling smarter, too. On the supply side, the mounting grassroots food movement is evident in the Local Food Guide published by the Appalachian Sustainable Agriculture Project—an Asheville-based organization dedicated to expanding community food systems. Last year there were 240 producers listed. This year there are nearly 400.

The weak economy has also encouraged people to plant their own gardens, taking a bite out of sales of the commodities that are relatively easy to grow at home, such as tomatoes and squash. For that reason, asserts Littman, farmers have to constantly evaluate sales and carefully choose what they grow. “Every week is a new lesson—the market is constantly changing,” he says, pointing out that farmers have some security. Raising tomatoes at home may be one thing, but try dehorning a calf in the backyard or growing a perfect morel mushroom.

Another advantage for farmers is that food is nondiscretionary, that is, rich and poor will keep buying milk and vegetables even in a backsliding economy. Take apples: Last year, Henderson County orchards enjoyed an excellent crop, which the Hendersonville Times-News estimated brought in $50 million. And while the numbers won’t be in until later this fall, they’re hoping for another strong season despite the economic downturn. But not all producers of agricultural commodities are thriving. If you thought apples were the number-one agricultural item in Henderson County, you’re wrong. Nursery sales account for four times the gross revenue of apples. Rick Jordan, who operates Deerwood Nursery in Zirconia has watched his sales plummet nearly 60 percent. While an apple-a-day habit is affordable, an ornamental shrub might set you back $125. And like many of the nurseries and greenhouses in the region, the company depends on new construction for its orders, which have slumped along with the real estate market.

“It’s not just me that’s affected,” says Jordan. “It’s a trickle-down effect. If I’m not selling, then it also hurts the guys that supply the bamboo stakes, seeds, and pesticides.”

Although agriculture isn’t completely dependent on the cyclical trends of the general economy, says David Lee, a commercial agricultural loan officer with Carolina Farm Credit in Asheville, there’s a catch. “Probably the biggest impact of the recession here in the mountains is that so many farmers rely on second jobs,” he explains. Lee adds that even small cost of living increases, such as health-care expenses, can have a significant effect on a small, family operation.

That potential loss of farmland worries many, particularly now. In addition to providing a wealth of local specialties, farms here play a key role in preserving the rural heritage and pastoral landscape of the area; and strong farms can balance the fragmentation of farming communities driven by urban sprawl and random development. “Many small farmers are carrying on a family tradition,” Lee continues, “but right now folks are struggling with the upkeep. If you don’t have a second job, you’re less likely to keep the farm.”

Mark Gallo, who operates Dry Pond Farm with his wife, lost his construction job last December. Their farm is an organic vegetable enterprise on former tobacco land in Madison County. To make up for lost income, Gallo is considering the risky and costly strategy of acquiring more land to increase the amount of acreage he cultivates. “We’ve seen sales rise and modest price increases, so we feel we can grow,” says Gallo. “But it does make us a little nervous.”

While finding a new job might be a less complicated undertaking, his resolve to succeed is proof of farming’s hold in Western North Carolina and one that a lengthy economic downturn seems unlikely to spoil.

“This may be our best year ever, we just don’t know,” says. “I’m not sure if farming is a dream or a nightmare, but there’s nothing else I’d rather do.”

Want to See More?
Naomi Johnson’s photographs highlight the agricultural diversity of Western North Carolina. An exhibit of her work, “Farm Fresh Photography,” is on display through September at the Greenlife Grocery Café, 70 Merrimon Ave., Asheville.