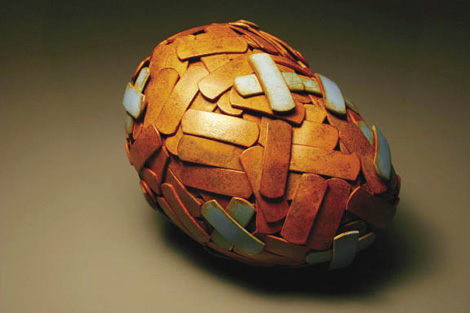 His sculptures give the impression a functional nature. Handles are anchored to heavy, white planes of steel. Intricate patterns of rust and robust blocks of orange and yellow cloak conspicuous stacks of rectangles. E. Ryan Simmons calls the aesthetic “familiar but unrecognizable.” The artist’s fixation with the impermanence of memory is behind almost all of his creative choices in his untitled body of work. “Memories aren’t always how things actually happened, but most people feel their memories are right on and true,” Simmons says. “We also feel that steel is a material that will last forever—like our memories. But steel fails over time as well. It rusts and takes different shapes.”

Roadside generators, power lines, circuit boards, and the “mass of things sticking out of buildings that aren’t really supposed to be seen” provide inspiration that’s colored by his ideas about the ability to recall information. “Those are the things that drive the buildings—allow them to function,” Simmons says. “Aren’t memories just a bunch of electrical connections, too?”

Before arriving at Penland School of Crafts in the summer of 2007, Simmons attended the Cranbrook Academy of Art in Michigan, where he experimented with nails, wood, and even band-aids as mediums in search of “material and emotional connections,” he says. “I began to understand the subtleties that successful sculpture contains while working with those materials. Then I applied what I learned to my current body of work.” Simmons stayed on at Penland, and was soon apprenticing with metal sculptor Hoss Haley and furniture maker Vivian Beer.

His work shifted when he started working with steel. Instead of playing on the emotions evoked by different materials, Simmons manipulates the metal to mimic objects that poke and prod the connections between the viewer’s mind and the material world. One piece especially bridges the gap between these two themes: the egg-shaped mass of baby blue and rust-colored steel band-aids in untitled (blue x), a piece that Simmons considers “a passageway into this body of work.”

Although Simmons is leaving Penland this summer for a stint with Americorps fighting forest fires in Arizona, he plans to continue sculpting and exploring this current body of work. “I feel like there’s still a lot left to do.”