Treasuring Tradition: The Cherokee Preservation Foundation invests in the tribe’s past and future 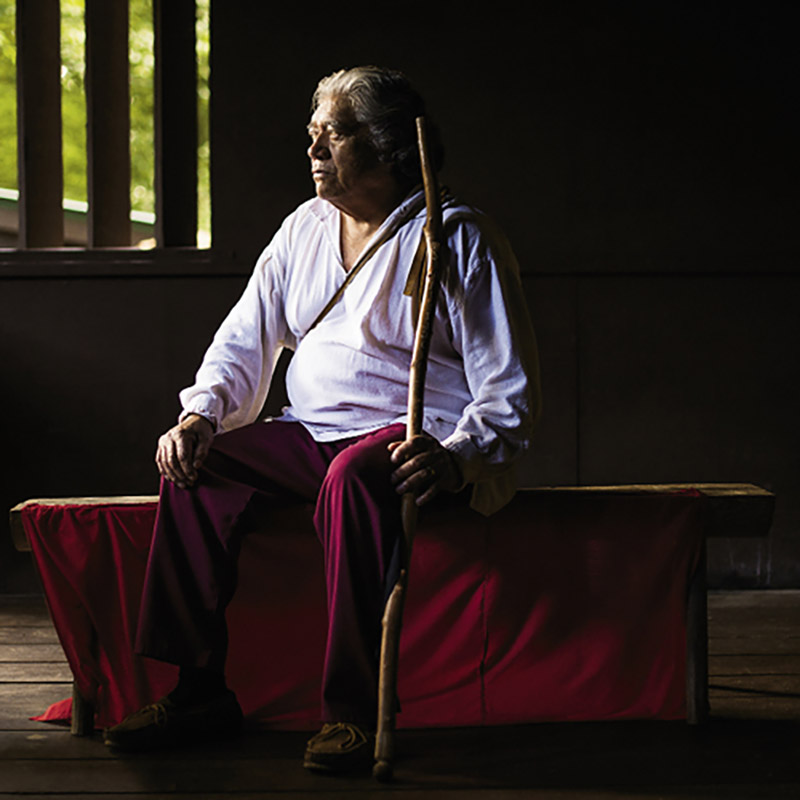 Sometime soon, Mary Thompson plans to harvest the river cane her family uses to make baskets. Thompson, helped by her mother and daughter, will divide the cane into quarter-inch-wide, six-foot-long strips. The women will peal the inner layers away, keeping only the strong outer portion of shiny silica, which they’ll dye orange, brown, or black, using bloodroot, walnuts, or the roots of butternut trees. The family is following a centuries-old method, one passed down through the Eastern Band of Cherokee Indians, without ceasing, from one generation to the next.

Thompson, however, didn’t learn in the traditional way, as a small girl at her mother’s knee. Instead, she attended a class on basket making paid for by the nonprofit Cherokee Preservation Foundation, which provides grants on the Qualla Boundary and in North Carolina’s seven westernmost counties.

Through the foundation, the 12,500-member Eastern Band has focused efforts on saving its culture and native language while at the same time boosting economic opportunities for both the tribe and the region.

The investment in preservation springs from a modern source: Harrah’s Cherokee Casino. The foundation receives at least $5 million annually from gaming profits, with the amount capped at $7.5 million. So far, in 12 years, $66 million has been divvied out, a sum that jumps to $99 million when coupled with leveraged matching funds from partnering organizations. More than 800 grants have been awarded in three target areas: cultural preservation, environmental stewardship, and economic development.
Foundation Director Annette Clapsaddle, a 33-year-old tribe member with diplomas from Yale University and the College of William & Mary, is leading the cultural renaissance that’s taking place. “I think the foundation has become a conversation starter and an agent of progress,” says Clapsaddle, who joined the nonprofit in January 2013. “When the community has issues or when opportunities come up, people look to us.”

Conserving Culture
On a recent weekday, four adult speakers of Cherokee have sacrificed their lunch hours to learn advanced grammar through the Kituwah Preservation & Education Program. The lesson covers correct verb usage.
Teacher Ben Frey is a tribe member and linguistics expert who’s a post-doctoral fellow at the University of North Carolina at Chapel Hill. Frey offers a word stem; the students’ task is to provide the correct tense. “I work” is “dagilvwistaneh” in Cherokee: present tense is “dagilvwisdaneha”; past, “dagilvwisdaneho’I”; future, “dagilvwisdanehesdi.”

His review might seem pedantic, but Frey’s work is integral to a multifaceted strategy by the Cherokee to save their native language. Much of the money is coming through the foundation, which, in nine years, has pumped more than $4.5 million into language revitalization.

Some startling statistics sparked the language-saving efforts: A 2006 foundation-funded study found just 460 fluent speakers remaining among the tribe’s members. Some 72 percent were older than 50, and elder speakers were dying more quickly than new speakers were emerging.

Today, in fact, there are only 200 or so tribe members who were raised thinking in the Cherokee language. They are known as “first speakers,” Kituwah Manager Renissa Walker explains, and they’re an increasingly rare breed. “What made that person who they are doesn’t exist anymore,” she says. Time was, “when someone went to a family event, the ambient noise around them was Cherokee,” but that barely happens these days.
Today, trained linguists such as Frey are needed to bridge the gap between first speakers and everyone else. Without a grasp of the language’s mechanics, the methodic assembling of the nuts and bolts that helps transform words into actual communication, the Cherokee language risks descent into pidgin speech, Walker notes.

Cherokee children attend the Kituwah Academy and learn the language through a total immersion program. Preservation money places books written in the Cherokee language into their hands, funds curriculum development, and pays for teaching materials. The foundation even helped develop a post-secondary degree program for future teachers of the language and has hosted language symposiums that bring together the three federally recognized Cherokee tribes: the Eastern Band, the Cherokee Nation in Oklahoma, and the United Keetoowah Band. As these efforts bear fruit, it means that one day, there will be more than just a few hundred fluent speakers.

Preserving Resources
Several multigenerational families in Cherokee make baskets, but the ones crafted by Mary Thompson, her mother, and daughter have a distinction: They’re the double-weave river cane variety. Double weave means making two baskets in one, a technique that provides extra strength and durability. The style is complex and difficult to learn, and by 2000, there were few tribe members—just two, by one count—remaining who could make them. The foundation paid for experts Ramona and Lucille Lossiah to teach others, including Thompson’s family.

These days, the family’s work is sought by collectors, and their baskets sell for several hundred dollars each. Still, Thompson wryly notes, “If you ever had to bust up all that cane, you’d know that was actually a million-dollar basket.”
The foundation isn’t just revitalizing craft. It also helps to regenerate sources of river cane, white oak, and other valuable natural resources that are in decline. This work falls to David Cozzo, director of Revitalization of Traditional Cherokee Artisan Resources. In the past decade, several million dollars from the foundation have flowed to RTCAR, and it, in turn, funds smaller nonprofits and encourages property owners to preserve materials used in basket making, pottery, and carving.
Consider cane, for instance: Traveling through this region in 1791, the famed naturalist William Bartram described the forests of river cane as “perhaps the most extensive … that is to be seen on the face of the whole earth.” Modern development changed all that. Bulldozers leveled the great stands of river cane, and while some can still be found, it’s not present in the quantity—or quality—needed by Cherokee basket makers.
Preserving and restoring the cane breaks, as they are known, has been a priority for Cozzo and his organization. “We can meet approximately half the river-cane needs of Cherokee artists,” Cozzo explains. “And the conservation efforts have dovetailed nicely with cultural preservation.”

Another successful venture saw RTCAR and the Land Trust for the Little Tennessee partner. The Land Trust placed the Cowee Mound, a historic commercial and diplomatic center for the Cherokee, under a conservation easement before deeding it, in 2007, to the Eastern Band. While conserving the mound and other properties along the Little Tennessee River, the Land Trust and RTCAR restored river-cane stands, and then made the cane available to Cherokee basket weavers.
Other partnerships have bloomed, too. Hand in hand with the Mountain Horticultural Crops Research and Extension Center, RTCAR developed a program to teach weavers how to sustainably harvest bloodroot, a traditional dye source. It has also funded vegetation mapping and a ramp-harvesting project through the North Carolina Arboretum Germplasm Repository, and supported projects to grow butternut, another source of dye, and white oak, used for basket splints.

Looking Forward
From the get-go, tribal leaders emphasized the importance of diversifying Cherokee’s economy beyond gaming dollars. Just prior to the casino’s 1997 opening, then Principal Chief Joyce Dugan worried aloud that federal and state laws could change to disallow the Indian-owned operations. “We have to make sure we plan effectively in the event that gaming is cut out from under us,” she said then.
Fast-forward to today, and you find Jason Lambert worrying over the same thing. Lambert, the tribe’s commerce director, was 15 when the casino opened. He says that without gaming, he might not have found good-paying work on the Qualla Boundary after college.

“I’ve spent my professional career within the economic-development function of the tribe,” says Lambert. “Gaming has been extremely good to me, to us, and to this region. However, when you look at the revenue resources of the tribe, gaming is overwhelmingly the primary source; so how do we bring other opportunities forward?”

To that end, foundation money is funding the Qualla 2020 Initiative. Through it, tribal and regional leaders, business owners, and others are hatching ideas for diversification. “It’s not just a gathering of minds to discuss problems,” Lambert says. “The goal is to develop action plans and give those plans homes. In the past, we’ve seen real projects that have had real impacts come from these sorts of initiatives.”

The tribe’s new Chamber of Commerce evolved from a similar foundation-funded planning process, Lambert explains. So did the town’s revitalization project, a series of greenways in Cherokee, and the Fly Fishing Museum of the Southern Appalachians, which is slated to open next year.

The foundation supports entrepreneurs as well, chiefly through the Sequoyah Fund, a smaller nonprofit, in the form of loans to would-be business owners. This provides seed money to tribe members who can’t access traditional bank financing.
Long House Funeral Home benefited from a loan, opening in 2009. Director Bruce Martin Jr. is culturally attuned, as only a native could be, to end-of-life customs among the Cherokee. Before Long House, tribal members relied on non-Indian owned funeral homes. “People tend to have the same style of services as everywhere else, but there are some little niches that occur, maybe a drumming ceremony or something along those lines,” Martin explains.

If the casino dollars ever do disappear, as tribal leaders worry they one day might, the Cherokee Preservation Foundation has lived up to its name, providing the tribe a framework for rebuilding culture, ecology, and commerce. Its work has shored up the possibility that the first of the preschool children to attend Kituwah Academy, now entering the fourth grade, will long be able to speak of the tribe’s legacy—and do so in its native tongue.