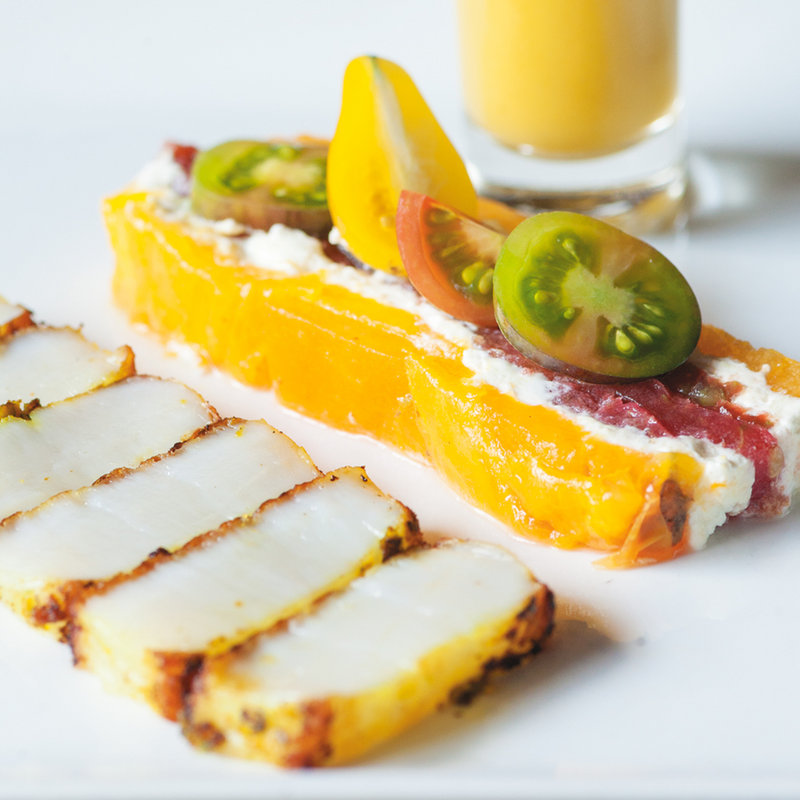 To prepare the tomatoes: In a blender, make a gazpacho by blending two cups of chopped tomatoes with peppers, onion, cucumber, red wine vinegar, and herbs. Season with salt and pepper. Toss with an eighth-cup of lime juice and an ounce of olive oil. Blend quickly to incorporate and set aside. Bring a pot of salted water to a boil. Put a small X in the remaining tomatoes. Blanch in water for about 20 seconds, then shock in an ice bath to chill quickly. Peel tomatoes and cut into quarters from the stem down. With a sharp knife, remove the seeds and inside flesh until just the outer wall, the petal, remains.

To build the terrine: Grease a rectangular terrine pan with olive oil and line with plastic wrap, leaving a three-inch overhang. Place a layer of slightly overlapping tomatoes in the bottom of the terrine, and lightly push down to compress. Place a second layer of tomatoes of a different color and compress. Crumble goat cheese evenly to create a third layer. Repeat the process, placing two layers of tomatoes and compressing and then a layer of goat cheese, until all tomatoes have been used. When finished, pull excess plastic wrap over the terrine. Weight the top with about five pounds of cans. Chill overnight in refrigerator. To serve, season scallops with salt, pepper, citrus zests, remaining lime juice, orange juice, and one tablespoon of olive oil. Refrigerate for one to two hours. Slice each scallop into six slices and arrange on a plate. Drizzle gazpacho around the scallops. Serve with a slice of terrine garnished with pickled carrots.