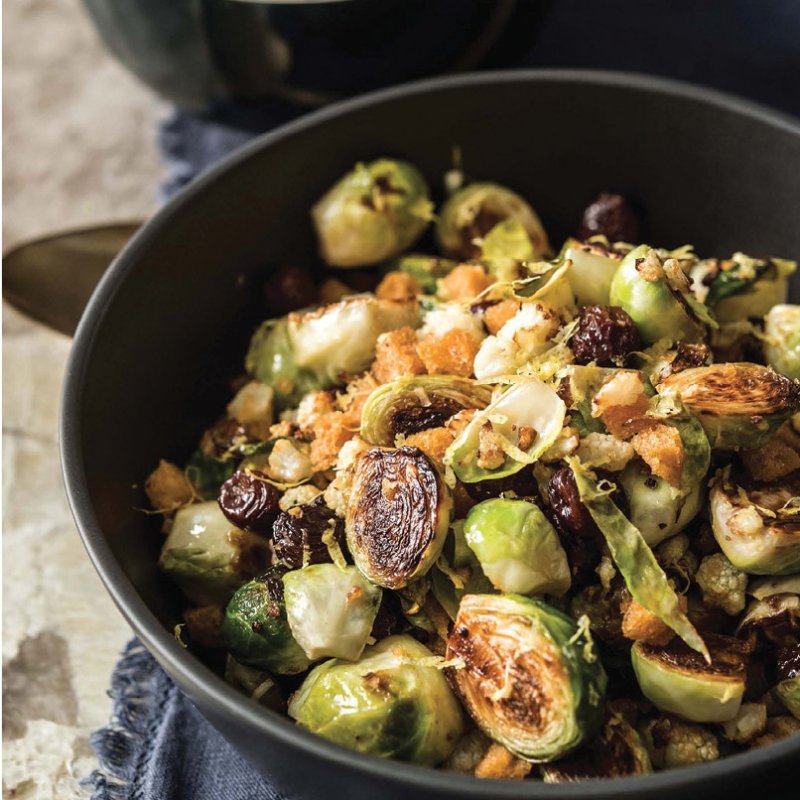 Position racks in the upper and lower thirds of the oven and preheat to 400°F.

Put the raisins in a small microwave-safe bowl and add enough water to cover by 1 inch. Microwave for 1 minute, then let stand in the hot water until very plumped and tender. Drain well.

Cut the cauliflower florets off the stalks; discard the stalks. Cut the florets in 1/4- to 1/2-inch pieces. You want to use all of the florets, even the crumbs. You should end up with 2 cups.

Line 2 half-sheet pans with foil. Toss the cauliflower with 3 teaspoons oil and 1/4 teaspoon salt on one pan. Spread in a single layer. Repeat with the Brussels sprouts on the other pan with 2 teaspoons oil and 1/4 teaspoon salt. Turn all the sprouts cut-sides down. Place the Brussels sprouts on the lower over rack and the cauliflower on the upper rack. Roast until tender and dark golden brown, about 30 minutes.

Place a paper towel-lined plate and slotted spoon next to the stove top. Heat the remaining 1/4 cup oil in a large cast-iron or heavy skillet over high heat until hot. When you drop a bread cube in, it should sizzle immediately. Add the bread cubes and spread in an even layer. Toss in the oil to evenly coat, then sprinkle with 1/4 teaspoon salt. Cook, tossing frequently, until golden brown on most sides and crispy, about 3 minutes. Transfer to the paper towel-lined plate with the slotted spoon to drain.

Return the skillet to medium-high heat. There should still be a thin film of oil in the bottom of the pan. Add the garlic and cook, stirring, until fragrant and starting to turn golden-brown, about 1 minute. Don’t let the garlic burn.

Lift the foil with the sprouts and cauliflower to dump them into the skillet. Add the raisins and bread cubes. Cook, stirring, until well-mixed, about 1 minute. Remove from the heat and zest half of the lemon on top. Toss once more and season with 1/4 teaspoon salt. Taste and add more salt if you’d like.