Home /To WNC, With Love

To WNC, With Love

To WNC, With Love: A local writer ruminates on her affection for the region 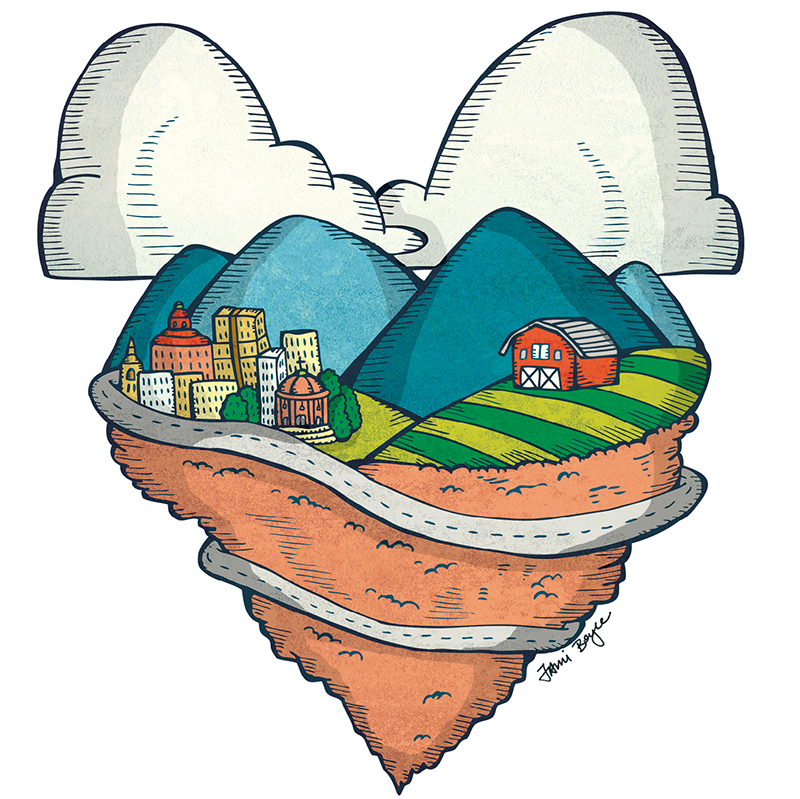 My husband and I recently celebrated a big anniversary with a party for friends and family—but it wasn’t to mark a marital milestone. We simply wanted to pause in appreciation for having lived in WNC over the last 35 years. For having chosen, almost at random, a place where we could put down roots, grow, and thrive, a place where, from their earliest years, our children learned what community means and where the natural splendor stays perennially fresh. A place where our lives expanded in ways we couldn’t have imaged as children of the suburbs. Those years were a precious gift, and we wanted to say “Thank You.”

In our time here we have lived on a farm, in a small town, and now in a real city, all the while within five miles of the magnificent Blue Ridge Parkway, which has become like a friend to me.

Along the way, among other marvels, we met legendary storyteller Ray Hicks and observed his astonishing faith-healing powers—and found faith ourselves. We hiked hundreds of miles of beautiful trails surrounded by the forest’s musty perfume, joined friends at a High Country farm where backwoods neighbors staged their own operas because television didn’t reach that far, and learned that religion, political party, race, and accent don’t always matter much, because the spirit of generosity in this region binds us all together as one people. No questions asked, just a helping hand when one is needed.

For me, living in WNC brought the satisfactions of learning to press apple cider, can dilly beans, and grow my own food, of becoming a garden club lady, and of watching friends’ children grow from newborns to adults with families of their own. For my husband, Saul, life here gave him room to run for political office, sometimes winning and sometimes losing, and the rewards of joining more than one top-notch chorus and sharing his love of music.

For our kids, growing up in WNC—namely Boone, where we lived for 25 years—meant having the freedom to roam all over town and country with minimal supervision, well before cell phones and location trackers existed. While the youngsters might not have known it, we parents kept our eyes on everyone’s children and usually knew where they were.

Saul and I might have moved anywhere on the East Coast to live closer to our extended families, which reside in Maryland. But there was a job for him in Glade Valley, North Carolina, at an antiquated country boarding school far from anything familiar, in a time when Alleghany County had only one stoplight.

My first impressions of WNC were inauspicious, but love’s like that sometimes. Saul and I had driven for two days from Wisconsin with a cranky toddler and a screaming infant in the backseat. When we finally parked the car, staggered by the humid heat, I took one look at the hard red soil and burst into tears myself. How could anyone live here?

But Glade Valley was a wonderful place to live, a real hamlet with a post office, a thrift store, and no traffic. The school, set on a working farm, had classrooms and dorms but also produced cattle, potatoes, sorghum, and apples. We had free housing, and one of the farmhands even plowed up a patch of our backyard so we could grow vegetables. The county ag extension agent came and taught me how to can. I joined a sewing circle of young moms, and Saul and I sang in the acclaimed Highland Camerata, just over the Virginia line.

The job lasted two years, and then we moved on to the nearest college town, Boone, where we bought a big drafty house a block from the main street. We had a third child, and the kids grew up roaming downtown in summer and sledding in winter. Then each one headed to UNC Chapel Hill. Saul and I reveled in small-town life together: along the way I had joined a garden club and he had won a seat on the town council.

Eventually, though, with our children on their own, we grew restless for a big city, and nowhere but Asheville would do. The walking lifestyle, the scenery, the “What’s next?” attitude, and the continued proximity to the Blue Ridge Parkway lured us. And now, a decade has flown past.

These days, I never ask, “How could anyone live here?” but “How could I live anywhere else?”