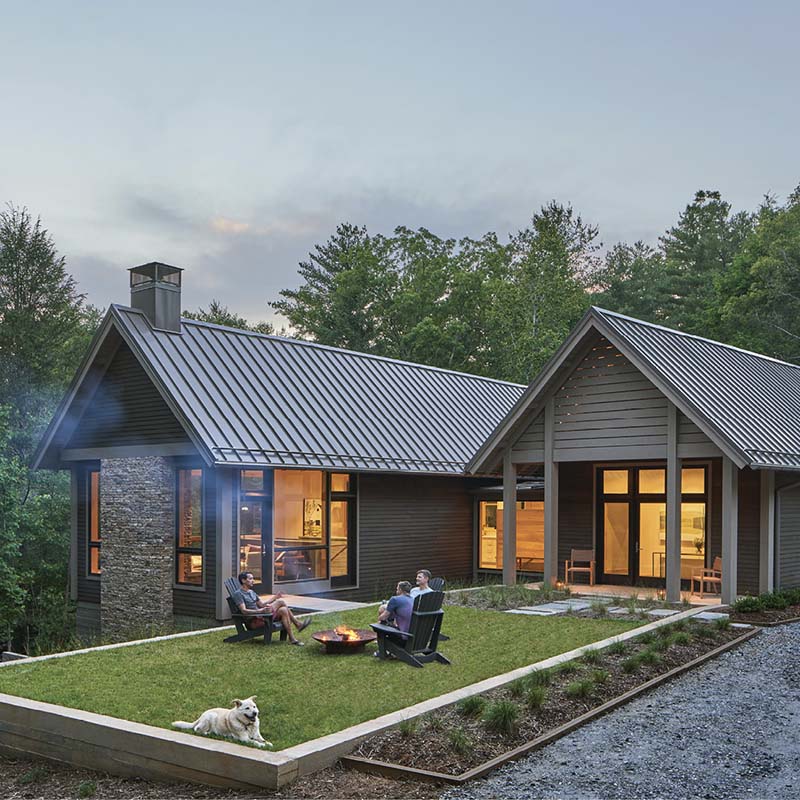 Time passes differently at the lake house. Dappled light filters in through the expansive windows. A squirrel skitters across the metal roof. The ceiling fan whirs quietly on the screened porch as the dog slumbers below. There’s nowhere to be but in the now, a welcome respite from the hectic pace of modern family life. For the Campos family of Winston-Salem—two working parents (Amy and Kevin, both physicians), two children, and multiple after-school activities, there’s no need to go far away to feel far away. Their house at Lake James, designed by Asheville’s Samsel Architects, is a relaxing escape, where a few hours can feel like days. While contemporary life can pull families in multiple directions, this home is designed to bring them together.

While the couple appreciates architecture and design, they weren’t attached to any particular aesthetic for their lake house prior to starting the process. They wanted something “like a cabin, but not so rustic” with “modern elements, open space, and clean lines,” says Amy. Beyond that “it was all them,” says Kevin of the architects’ vision for the home’s design. What the Camposes did know was how they wanted to use the lake house: as a place where the family could be together, distraction free, to spend time together and appreciate nature. They wanted a space that would work for the family not just now, but 10 or 20 years from now, as their young children grow and perhaps return one day to use the house with their own families. In other words, they’re in this for the long haul.

With that in mind, the Samsel team set out to create a home that would stand the test of time. Key to that outcome was treading softly on the existing landscape so that the house would harmonize with the natural elements and surroundings. “We wanted just a light touch and to feel like you’re still tucked in the woods,” says McLauchlan. The team made repeat visits to the property to get a feel for the position of the light during different times of the day and to envision the contours of the land.

They came up with the idea for what essentially appears, upon approach, to be two cabins. The basic footprint is made up of two rectangles with a “dogtrot” connecting the sections—a nod to Appalachian vernacular architecture, which often included an open breezeway between a home’s kitchen and living quarters. This connector is enclosed, allowing not air, but light to flow in through the full-wall window. The horizontal slats on the front and back porch harken to traditional local architecture as well—a modern reflection of the traditional corn crib design.

The architects aimed to set the house as seamlessly as possible into the slope of the land, making use of an old logging road on the property rather than cutting trees for a clearer path. In fact, the larger trees “of value” on the property were given names in recognition of their importance to the site, Kevin says. And the trees are of tremendous importance. With floor-to-ceiling windows framing the views of the forest, the sylvan giants are very much part of the experience, both inside and outside of the home.

Interior finishes put an emphasis on wood as well. Eastern white pine (native to the area) shows up in the ceiling, molding, and some of the furniture, offset by light, airy colors on the painted surfaces.

A window from the kitchen opens onto the screened porch, allowing for conversation while meals are prepared. There’s a sense of ease to the design—nothing fussy. Perhaps the only dramatic touch to the house is the fireplace, with its cold-rolled steel facing. This statement piece—weighing 600 to 800 pounds—required some engineering, but the result is an architectural feature that delivers not only an impressive appearance but a radiating warmth that lasts after the gas logs have been shut off. Sitting here on a chilly mountain evening, says Kevin, is “the best seat in the house.”

Downstairs, the “bunk room” is a retreat, where the kids can hide away and read books quietly and host friends for sleepovers. And as they grow, the patio positioned outside the room will allow them to spread out and host friends in their own private space independent of their parents.

With its two distinct but connected living spaces, the 2,200-square-foot house is intimate and intimately tied to the landscape. No space is wasted, says Kevin. With landscaping by Asheville’s Drake Fowler (also deputy director of the North Carolina Arboretum), the outdoor area is an extension of that approach. The hiking trails on the property and access to the lake provide a sense of expansiveness. But hammocks strung in a copse of trees give the children a sense that they’ve got a place all to themselves (even though they’re in clear sight of their parents).

Although there is now Wi-Fi access on the property, for a long time there wasn’t, says Amy, and that suited the family just fine. With the option of screen time eliminated, the lake house became a place to play cards or a board game, read a book, or go for a walk together in the woods. Although they can use devices there, the default is to keep them stashed away, opting instead for family time together or a chat by the fire pit with friends. In this place to “decompress and connect,” Amy says, it’s not the quantity of time but the quality that matters, and lake time is nothing but quality.