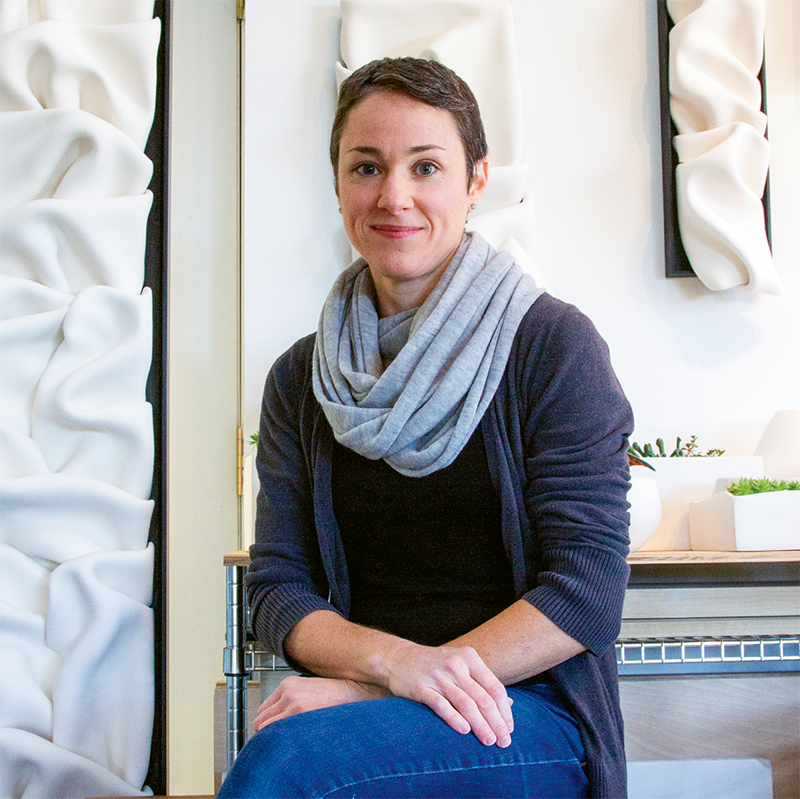 Lithe and petite, ceramicist Jeannine Marchand stands in her light-filled Spruce Pine studio surrounded by her art: luminously pale, unglazed sculptures that reference ocean waves, the graceful shapes of birds, and even the spikes of puffer fish. Some are small enough to fit into standard frames, while others are freestanding pieces that loom in the room’s corners, reflecting sunlight streaming through windows that look out toward the mountains. The artist, who grew up in Puerto Rico and came to WNC to study at Penland School of Crafts in 2000, instantly felt connected to the area. 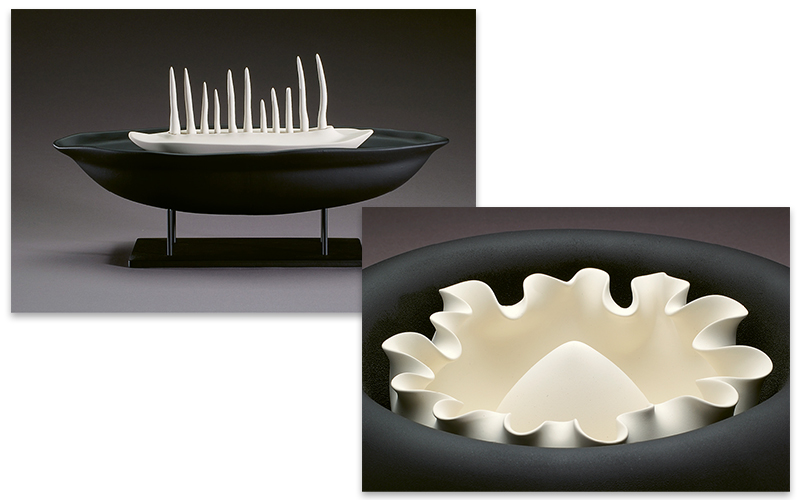 “I knew I was home,” she remembers. She returned to Penland in 2001 for its two-year Core Fellowship Program, and after completing a Master of Fine Arts at Cranbrook Art Academy in Michigan in 2008, she came back a third and final time.

Her home is here now, but Marchand credits her childhood and her artistic parents for her early creative life. Her father is a photographer, and her mother a gifted seamstress. Lessons at the arts league in Old San Juan began her official training, but it was after walking past the pottery studio there that something clicked. “I wanted to do that!” she says, laughing.

Her memories of Puerto Rico—folds in her mother’s fabrics, the beach where the family spent summers, and the smooth texture of water-washed stones—emerge out of the clay she forms. She fires pieces in an electric kiln that relies on oxidation, keeping them colorless. She decided on the process at Penland, when she photographed her pots in black and white. “I loved the way that not using color brought out the lights and shadows and lines,” she explains. 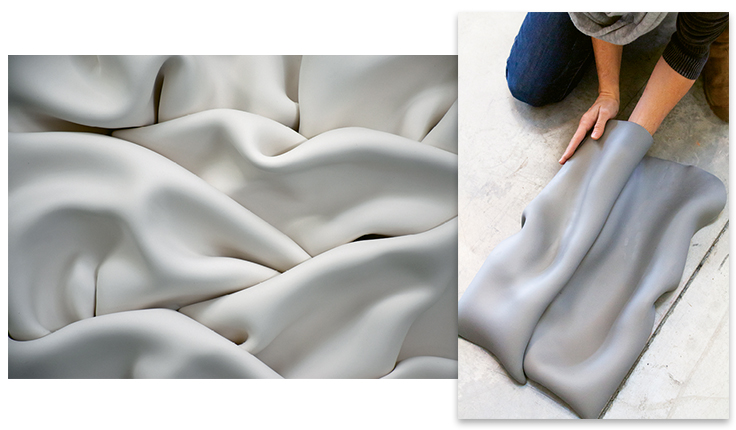 Natural Selection - From icicles to ocean waves, nature inspires Marchand’s work, which features a variety of shapes, all of which accentuate the play of light and shadow.

Her signature folded shapes were the product of a happy accident in college, when she rolled out clay and one piece broke off, creating a fold. “Instead of starting over, I spent two seconds looking at it and I liked what I saw,” she remembers. Cynthia Bringle, her teacher at Penland, pushed her to keep experimenting with forms, and during her MFA studies, she introduced new shapes, including spikes, into her repertoire.

Pieces can take months to create, and Marchand works alone to stay focused. “The clay is fragile,” she says, “and if I’m distracted it could break. I need to be here, really present.” She rolls clay out twice before using her hands and arms to shape it. The clay dries in frames on her studio floor, then she sands and uses sponges to create the ultra-smooth finished surfaces.

Return to the Fold - To make her folded shapes, Marchand rolls clay out several times and uses her hands and arms to drape and form the clay.

While her work has been in galleries as far away as the Netherlands, she looks forward to local shows. Currently, Marchand is finishing up a string of commissions and planning a period of artistic exploration. Like many artists, she finds inspiration in unexpected places, even in the leftover clay. Rather than discard it, she forms it into small shapes that she enjoys gifting to friends. “I just love clay,” she says. “Even what’s left over can become something new.”

Check out Marchand’s work at jeanninemarchand.com and at Momentum Gallery in Asheville.