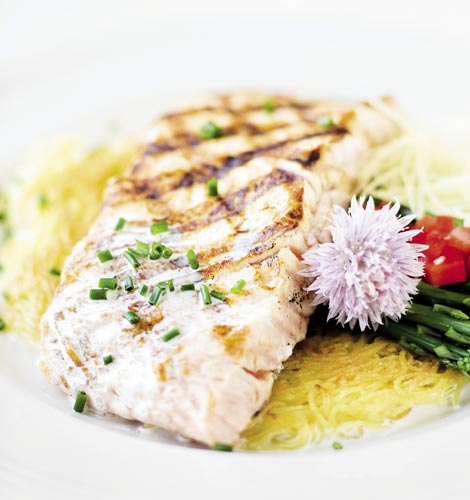 Sometimes one yearns for a dining spot other than the newest place on the scene—the ultra-hip tapas joint or popular gastropub. A place rich with studied and steadfast tradition can be a discovery in itself.

Hence, I was pleased to find the Vintage House, once a residence, on a leafy thoroughfare in Hickory’s Oakwood neighborhood.

Crisp, white table linens and a single candle in a brass holder adorned each table and foreshadowed a très formal dining experience. But refreshingly reasonable prices, personable service, and formidable executions of the French-leaning cuisine reminded me of the culinary finds in European villages that always make for good memories.

Chef Matt Parker calls his cuisine regional American, and certainly there are the classics, such as Muscovy duck breast, beef tenderloin medallions, and Cobb salad. However, a perfectly executed red snapper with lemon-brown butter sauce and capers over asparagus and orzo smacked of the chef’s French culinary roots. A graduate of the French Culinary Institute in New York City, Parker earned his advanced certification at Le Cordon Bleu in Paris.

The dish’s sweet butter, acidity from the lemon and capers, perfectly blanched asparagus, and caramelized onion and red pepper medley complemented the meaty fish, and conjured the subtle and mature flavors of a formal French lunch.
Pasta dishes compose a significant portion of the menu, and the rich green and yellow torteloni in a walnut-basil cream sauce with sautéed spinach was created with an elegant hand.

Parker once worked as a sous chef in the famed Commander’s Palace in New Orleans with Emeril Lagasse, continued to the Four Seasons and Pierre Hotel in New York, and eventually the Elk River Club in Banner Elk. He purchased the Vintage House in 1997, and doesn’t mind the moniker of a traditional establishment. “People come here for a formal experience,” says Parker, “and that’s what I give them.”

The bar, with wood paneling, leather chairs, and a cozy banquette nook, could easily serve as a casual pub. Even here, though, Parker holds fast to his original intention. “The bar is one of the most booked dining rooms we have, but we still keep it formal,” he says. “It’s what we do well, and we fill the house.”