The Vanishing Point: Harboring troves of curiosities, such as dwarfed turtles and carnivorous plants, bogs are among the most imperiled habitats in the mountains. Today, conservationists are bringing these fascinating and rare ecosystems back from the brink in hopes of creating the first national wildlife refuge in Western North Carolina. 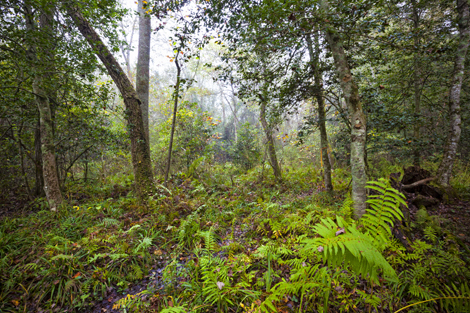 At the point when my feet become lodged in shin-deep mud and I struggle to free myself, I’m immensely grateful that I had enough common sense to wear my old rubber rain boots. My poor friend was not so smart, but we giggle incessantly at how ridiculous we look tromping through a bog in Henderson County.

It’s a cool day in early March, and we’re tagging along with a team of scientists from The Nature Conservancy on an expedition into one of the most rare landscapes in Southern Appalachia. Through the tangle of shrub branches and dead leaves, the signs of a greener season are beginning to show. In a couple of months, this soggy place will be lush with sphagnum moss, giant cinnamon ferns, many species of sedge grasses, and a rainbow of blooms. The peculiar mountain sweet pitcher plant will put on its display in late spring when the loveliest smelling crimson flowers open, luring insects into the tubular leaves of this near-extinct carnivorous specimen.

Bogs are intriguing places full of otherworldly curiosities such as dwarfed turtles and dragon’s mouth orchids, but they’re also incredibly fragile, and therefore largely off limits to visitors. The importance of these delicate habitats has only come to light in the last decade, prompting organizations including The Nature Conservancy and U.S. Fish & Wildlife Service to save the region’s remaining bogs. If their efforts go as planned, it will mean the creation of Western North Carolina’s first national wildlife refuge.

Formed where rainwater collects in low patches, bogs are a type of wetland characterized by highly acidic soil mostly devoid of nutrients. Ideally, these conditions prevent mobs of trees and shrubs from overcrowding the vulnerable plants and creatures. “We have five endangered species that live in these bogs, and can only live in these bogs,” says Gary Peeples, public affairs officer with the U.S. Fish & Wildlife Service. At risk are the threatened bunched arrowhead, green and mountain sweet pitcher plants, swamp pink, and tiny bog turtle, which measures just four inches in length.

Aside from harboring rare species, these wetlands act as giant sponges, helping regulate water flow and reduce the extremes of drought and flooding. They serve as natural filters too, contributing to improved water quality for aquatic life downstream. Bogs are also important breeding and nesting grounds for amphibians and many migratory birds, some of which are also in jeopardy.

But it isn’t just the plants and animals that are in peril; this ecosystem as a whole is on the brink of disappearing. It’s believed that 200 years ago, there were as many as 5,000 acres of bogs across Southern Appalachia. According to Megan Sutton, director of The Nature Conservancy’s Southern Blue Ridge Program based in Asheville, only about 500 acres remain today, the vast majority of which are concentrated in Western North Carolina, specifically Alleghany, Ashe, Avery, Henderson, Transylvania, and Watauga counties.

The cause for the decline points to human encroachment. Many bogs have been drained for farmland. At other sites, fragmentation of the landscape has damaged nutrient levels in the soil and the hydrology, referring to the movement, distribution, and quality of the water. Woody vegetation and invasive species threaten to choke out what’s left of the endangered flora. Even poachers after rare beauties have contributed to the destruction.

Sutton and her team are leading the charge for bog restoration in the region. The Nature Conservancy owns and manages four bogs, the locations of which are kept secret. Of the four, the six-acre Etowah bog I visited is the most intensely managed site.

Warding off invasive species and minimizing overgrowth are obstacles faced. In one area, stakes mark several sections of ground measuring one square meter, where the team is experimenting with how to best eradicate the nonnative, invasive marsh dewflower. In one spot, they used chemicals, while in another, each plant was pulled from its root, and in a third patch, the team waited until the plant flowered before plucking it from the ground. This technique is known as adaptive management, “when you try something, you learn from it, and then you adapt,” Sutton explains.

Another test site evaluates the use of livestock grazing, namely goats, to clear woody vegetation versus doing it by hand. It’s controversial, but so far, they’re finding that goats tend to steer clear of devouring  the plants the group is striving to protect.

Perhaps the biggest hurdle any wetland conservationist faces is testing and restoring the hydrology. Understanding where the water comes from—via surface water or groundwater—and how it moves about is paramount for decision-making. Depending on findings, the restoration could involve manipulating stream channels. “When you do hydrologic restoration in wetlands that are highly degraded, generally it’s very ugly before it gets pretty because it often involves digging and big machinery,” Sutton says.

The Etowah bog is undergoing a hydrological study and The Nature Conservancy hopes to avoid a huge overhaul, though it could be several years before the analysis is complete. Steps are also being taken to minimize fertilizers that are seeping in via run-off from nearby farmland. In one spot, a rock dam separates an unusually turquoise-tinged sedimentation pond from a channel. It’s apparent the dam is working, as water runs clear on the opposite side.

Bog science is a very young field, and there’s little published literature on the subject. That’s not to say there aren’t a host of organizations working on conservation; there just aren’t agreed upon management practices. “All these organizations that manage bog sites have different missions and mandates,” Sutton notes. But that’s something she is attempting to change with the recent establishment of the Bog Learning Network, comprised of representatives from state and federal agencies, bog specialists, and plant ecologists.

January marked the group’s first meeting, and Sutton says they had to turn people away. “There was an outpouring of interest. People came from Tennessee, Georgia, Virginia—people with expertise who want to share.” In building connections with others in the field, she aims to pool resources and foster an exchange of information.

Sutton recognized that to raise awareness and support for conservation she needed to introduce the public, colleagues, and donors  to these landscapes. “Bogs tend to be places that not many folks either get the opportunity to visit, or want to visit,” acknowledges Sutton.

To address the disconnect, she teamed up with Asheville photographer Michael Oppenheim to illustrate the wild beauty found in these landscapes. Since February 2012, he has trekked into Etowah bog on nearly two dozen occasions, snapping thousands of photos. The images, which are already helping educate through newsletters, brochures, and slideshows, capture the allure of wild lilies, dragonflies and frogs, and the distinctive mountain sweet pitcher plant, his favorite subject.

“The thing that struck me is that this piece of land is only six acres, and if you’re driving down the road, you’d never know there is a bog in there with these really diverse species,” Oppenheim says. “You can very easily take it for granted.” He hopes to present an educational exhibition in conjunction with The Nature Conservancy next year.

While the group oversees only a fraction of Southern Appalachian bogs, it’s laying important groundwork for a larger initiative, the Mountain Bogs National Wildlife Refuge proposed by the U.S. Fish & Wildlife Service.

According to Peeples, the refuge could be established as early as this summer, making it the region’s first. It could eventually encompass up to 23,478 acres, which includes upland buffer zones across 11 Western North Carolina counties and two in Tennessee. Sections of it would be open to the public for hunting, fishing, wildlife observation and photography, and educational programming.

At press time, the proposal awaited approval from the director of the federal wildlife service. If the refuge is authorized, the U.S. Fish & Wildlife Service must acquire the land to make it a reality, Peeples explains. That’s where The Nature Conservancy comes in.

The nonprofit plans to donate a conservation easement to establish the Mountain Bogs National Wildlife Refuge, which would allow it to continue managing the land, preserving the habitat in perpetuity. And while it will take years to acquire the full acreage, it’s a giant step. Says Sutton, “My hope is that all of these things point toward greater management and appreciation for these natural communities.”