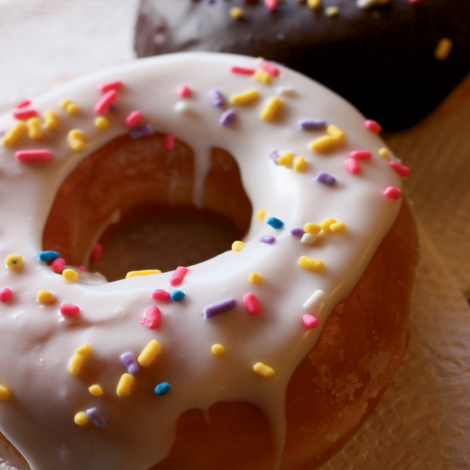 There’s something irresistible about the doughnut—simple, sweet, comforting, and conveniently dunkable. It’s no wonder Davis Donut House in Forest City has been serving bear claws, blueberry cream-filled, chocolate glazed, cinnamon twists, and many more tempting varieties for 40 years. But it takes more to make it in the doughnut business than what’s in the bakery case. Here, a sense of community and tradition are the ingredients that keep the shop baking year after year.

The bakery was the town’s first, opened by Charles and Shirley Davis in 1972. For the next 30 years, the couple welcomed patrons beginning at 5:30 a.m. each day until the last doughnut left the building. In 2004, the Davises sold the shop to Chris and Deb Taylor, who eventually moved the operation to its larger location along West Main Street.

Today, the doughnut destination is owned by a trio of locals, including Forest City native Roger Jolly. “I got involved because this is truly a local business, and everyone has always loved Davis Donuts,” says the retired accountant.

Head baker Beth Carter starts at 8 p.m., often not leaving until the wee hours of morning, just before the early birds start filtering in for their favorites. The shop serves more than 2,000 doughnut each week.  Folks can select from more than 25 varieties,  including the undisputed  top seller, the Orange Twist—three strands of twisted dough coated in a sweet orange glaze. It’s a Davis Donut original that proves classics, like the shop itself, are simply irresistible.  Says Jolly, “Tourists and the people who live here tell me they don’t need Krispy Kreme when they’ve got Davis Donuts.”