A Sprouting Tradition: Bamboo beats out cucumbers in the pickle jar 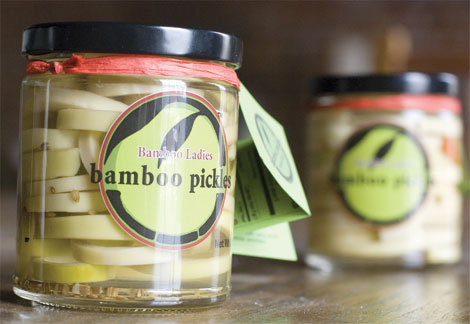 Carla Squires remembers donning unusual gear the first time she set out to harvest bamboo as a teenager. Decked in a raincoat, boots, and hat, and wielding a machete, she ventured into her grandmother’s Wilkes County grove dressed for jungle combat. It wasn’t without reason: Her mother told her there were snakes in the bamboo and that it rained ticks.

Despite the potential dangers, harvesting and pickling bamboo is a family tradition that dates back to 1970, when Squires’ maternal grandmother, Johnsie Walsh, planted seven sprigs in her backyard. Three generations and nearly 40 years later, that tradition has sprouted into the Bamboo Ladies, a full-blown pickling operation now in its third year of business.

The foreign grass arrived in Wilkes County via a member of the Women’s Army Corps returning from Panama years before Walsh planted her first stalks. “The women in the community were trying to figure out what to do with it and began experimenting,” Squires says. “Everybody had a different recipe.” Her grandmother’s was for pickles, and within several years, the backyard stand swelled to a three-acre grove. Walsh enlisted her daughter, Iva Faw, to help process and pickle the bamboo, which they gave to friends and family.

Walsh passed away several years ago, but Squires decided to keep the tradition going. Leaving a job in technology finance, she took a food acidification class at N.C. State University and signed up with Blue Ridge Food Ventures, a shared-use commercial kitchen in Asheville.

“We’re completely hand processed,” says Squires, who still suits up each May to harvest with her parents and other family members. “Harvesting can take all day for several days.” Once the stalks reach a height of four to eight feet, they are shucked, sliced, and boiled. The work is muggy and uncomfortable, but each haul yields about 2,000 jars, all of which have sold out in the first two years of production.

The pickles are spicy, blond ringlets, tart with overtones of garlic and dill. The Asian food staple, paired with Southern spices, makes an exotic substitute for its cucumber cousin. Squires suggests using them as an appetizer or side dish, or to garnish a sandwich, salad, or bloody Mary.