Puppy Love: A new take on stuffing will be your next crush 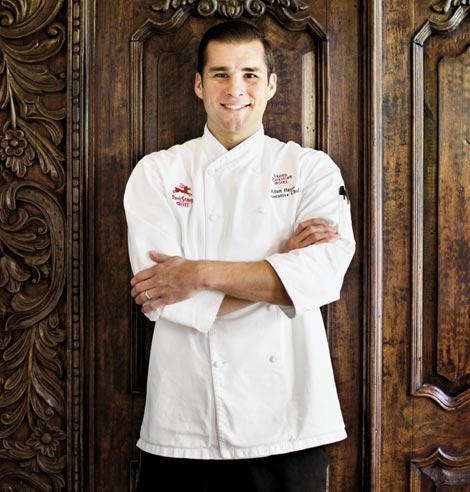 Holiday stuffing comes in many imaginative flavor combinations—pumpkin-mushroom; pecan-apricot; apple-cranberry-raisin; sausage, giblet, and oyster. And all are served in traditional fashion alongside the turkey. But Adam Hayes, executive chef at Red Stag Grill in Asheville, broke the dressing code by creating a dish that has guests asking for seconds and thirds at the restaurant’s annual Thanksgiving dinner.

Hayes’ Mountain Apple Stuff Puppies recipe combines the flavor of stuffing in a hush puppy form for a delicious finger food that can be dunked in turkey gravy.

“You have to have stuffing on Thanksgiving,” Hayes says. “When we were brainstorming ways to include it on the menu before our first Thanksgiving dinner, it occurred to us that this is the best way to serve the side. It’s such a simple idea, but people love it.”

For the traditional stuff puppy recipe, the chef incorporates apples grown in Western North Carolina. But, he says, you can personalize the recipe by swapping the fruit for sausage, for example.

Hayes suggests cooking the hush puppies in a turkey fryer after the bird is done to absorb the flavor.

No matter how you prepare them, Hayes’ spin on this traditional side dish will make a well-dressed hit for the holidays.