A New Food Frontier : A mom breaks free from the kitchen to find a baffling, but delicious, new culinary scene 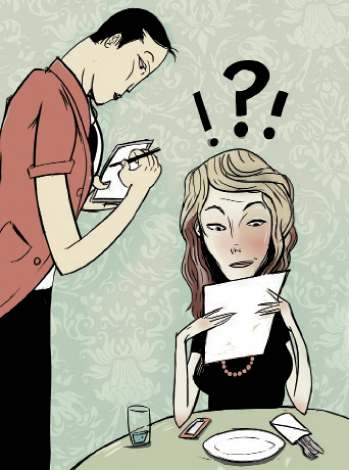 I’ve been frequenting a few of Asheville’s downtown eateries lately, and well, might I be honest without losing too much of my cool factor? I’m lost in the new language of culinary arts. On a recent night out, I took so long to read and re-read the menu, struggling to find something familiar, that the waiter began to tap his foot while my friends stared at the ceiling. They’d placed their orders with barely a glance at the menu, rattling off names of dishes I’d never heard of and was seriously nervous to try.

Unlike me, they aren’t newbies to the expanding culinary scene. While I’ve been strapped to a stove whipping up Hamburger Helper and other equally fabulous dishes, they’ve been strapping on heels and making the rounds at eclectic eateries. My past dining-out experiences can be mapped out by following the golden arches to the land of fast food and drive-thrus. It’s called kid food. Think hamburgers, hot dogs, pizzas, and chicken tenders. I know, not exactly health food. But don’t judge me; I’ve got boys—big, hungry, nonstop-eating, athletic boys.

Now, my sons are in various stages of leaving the nest, and I, freed from the stove and Wendy’s, can explore the world of adult dining again. I’d heard all the raves about Ashethentic food (as one menu calls it), but clearly I was a novice, unversed and unaware, naively joining the ranks of diners that descend upon town with stomachs growling. I was ready for the adventure, not so ready for the reality.

That initial dinner out found me in the restroom of an art-filled restaurant Googling “cornchions” and “goujon” on my smartphone. I also surreptitiously called the teenager to make sure he’d gotten home by curfew. Turns out, he knew exactly what these two vexing items are. “Mom, cornchions are those tiny cucumbers, gherkins, and goujon is the French word for fried strips of fish. They use sole to make it.”

I held the phone out from my ear to make sure I had the right number. “How do you know that?” I asked.

“My domestic arts teacher told me,” he explained.

Food wasn’t my only lesson that night.

When I ended up back in the powder room looking up “speck,” I decided it was time to download the food app a friend had suggested. By the time the $9.99 download was finished, I’d already eaten the speck, aka Italian ham, atop my chicken sandwich with cranberry mayonnaise. It was ah-mazing.

The food app came in handy, as it’s hard to decipher whether a word refers to a food or preparation technique. For example, chiffonade means to chop, while nage is a broth in which crustaceans are cooked. And while I never graduated beyond using garlic salt in my kitchen, local chefs are mixing flavors and textures with inspired instincts for tastes—watermelon combined with cumin feta cheese, toasted pumpkin seeds, and charred-lime vinaigrette, for instance.

Gone are my days of a steak and baked potato on the anniversary night out with the husband. Now, the choices are as diverse as the population that mingles on Asheville’s streets. And while the restaurants may be reducing everything from mangos to balsamic vinegar, I’m far from reducing, as my morning weigh-ins show. Still, it feels like I’m getting my mojo back, but in Asheville, the word is pronounced “mo-ho” and it’s a Cuban barbecue sauce drizzled or poured over pork. Again, ah-mazing.