Justin D. Turcotte: Polished Delivery: Years of practicing behind the scenes pay off 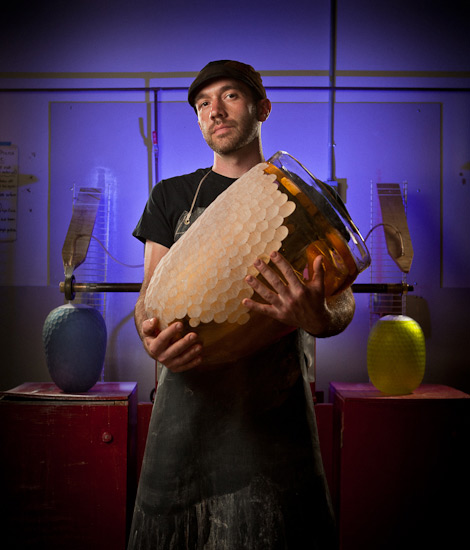 It’s one thing to live as an artist, but judging by the décor of Justin Turcotte’s living room, he’s taken the idiom very literally. Clad in white walls with matching display pedestals, the probably 300-square-foot space is set up as a small gallery. There’s some metal work on display, ceramics, an interactive canvas that translates the act of painting into sound, and two series of Turcotte’s sanded glass orbs. All these pieces are works by artists who are employed at Penland School of Crafts.

With the main campus about a quarter mile down the road, he thought it would be fun to open a gallery in his living room where other nonacademic artists could show their art. As a technician (translation: the guy who keeps many of the school’s studios in operating order), Turcotte knows what it’s like to exist behind the scenes.

Aside from one introductory college class, he has no formal education in glassmaking. Turcotte spent seven years working under three New England artists, learning by sheer repetition. At one shop, he spent two years just applying color to pieces. At another, he was allowed to work glass, producing large editions of his boss’ designs.

“When you do the same thing over and over like that, eventually you become pretty good at it,” he says. “But as a result of doing so much production work, I didn’t know what I wanted to create anymore.” So Turcotte quit, and took his current position at Penland. It may be part-time, but it has given him the opportunity to collaborate with many other glass artists—people whose work he’d seen in magazines. And in his personal time, he focuses on exploring what he can accomplish.

Turcotte’s vases often involves colored glass accented with a glass top, which he describes as creating the false impression of an opening. Meanwhile the visual weight of each piece—whether it’s bulbous or tall—always rests on a narrow footprint. “I really like creating glass pieces that stand on that small point of contact,” he says. “They look so tenuous.”

Tired of producing glossy pieces for so many years, Turcotte has taken a liking to cold work—the process of altering the surface of glass once it has cooled. Where most artists consider a project done after it leaves the annealing oven, Turcotte may still have 20 hours of grinding and sandblasting ahead of him to achieve a honeycomb effect. But after so many years in other people’s studios, he’s happy to spend the extra time, creating his own designs and developing his own body of work.