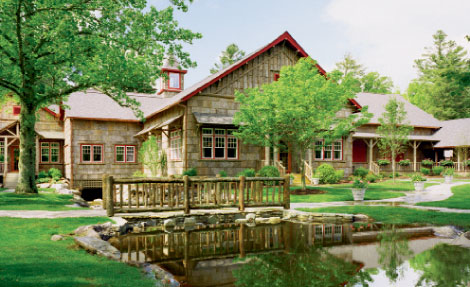 At last, I have struck it rich here in North Carolina and am in the most peculiar and one of the most poetic places I have ever been in.” These words were scribbled in ink by Harvard Professor William James, a visitor to Linville in 1891. The next year, guests started flocking to his newly built Eseeola Lodge.

More than a century later, visitors still kick back in wicker chairs on the lodge’s rustic porches, lined with bark siding and railings fashioned from raw branches. Only now they’re composing text messages on cell phones instead of writing letters.

Eseeola is one of a small number of Western North Carolina’s historic inns that remain in operation today. Constructed of stone from nearby mountains or hickory poles and chestnut bark from surrounding forests, these retreats employed easily accessible materials in architectural styles that were intentionally exotic and well-worth writing home about. Charmingly rustic, they helped establish the palette of materials and decorative details that came to prevail in the resort towns they graced.

Each of these towns attracted a loyal clientele from specific Southern cities. Cottagers and tourists escaping the summer heat of their hometowns traveled from New Orleans to Cashiers and Highlands, from Columbia to Saluda, and the North Carolina Piedmont to Linville and Blowing Rock. They settled into simple summer lifestyles that included porch-sitting, checkers-playing, trout-fishing, and boating. Today, guests who check into any of these Blue Ridge landmarks enjoy the same leisurely pursuits that have perpetuated for generations.

Founded in 1888 as a prospective timber and mining town, Linville owes its existence as a resort area to the industrialists’ wives. Citing the allure of the land’s natural beauty, they convinced their husbands to build a charming town of streets lined with cottages clad in chestnut-bark shingles. Several of Linville’s finest homes were designed by architect Henry Bacon, who is best known for designing the Lincoln Memorial, and as a leader of New England’s shingle-style movement.

The Eseeola Lodge opened in 1892—a rambling shingle-style building with statuesque gables and the popular chestnut-bark siding. An immediate hit among summering families from Wilmington, Charlotte, Nashville, Birmingham, and beyond, the inn grew in the Roaring Twenties to include a rustically elegant annex with large rooms, luxurious baths, and private porches. Hard times hit with The Great Depression, and disaster struck in 1936 when a fire destroyed the original lodge. Before that, the annex across the street had only a double row of rooms. But it was transformed into the main lodge with the addition of a large living and dining room.

“We are very blessed that the families who own the lodge really want to preserve what we have—for their pleasure and the pleasure of those who come here,” says General Manager John Blackburn. Within the cavernous living room, crackling fires glow in huge stacked-stone fireplaces on chilly mornings and evenings, inviting guests to settle in to cozy chairs. In the dining room, meals featuring brook trout and vegetables from local farms recall those enjoyed by Eseeola’s first guests. The most direct link to the old inn’s history, however, can be found just by leaning back in a wicker chair on your own private porch, and breathing deeply of the fragrant air.

With its grounds overlooking a lake and the majestic face of Rock Mountain, nature-lovers have long been lured to the site of the High Hampton Inn in Cashiers. In the early 1800s, the Hamptons, a family of South Carolina planters, began summering there in a house they dubbed Hampton Cottage. Wade Hampton III, later to become a Civil War general, South Carolina governor, and United States senator, built the Hampton Hunting Lodge here to share the area’s fine fishing and game lands with friends.

The property adopted the name High Hampton and acquired its first dahlia garden in the 1890s under the ownership of Wade’s sister, Caroline, and her husband. Today, dahlias still grow profusely in a garden guests pass as they approach the inn, now standing where the hunting lodge once was. In 1922, the McKee family bought the land, preserved the original buildings, and constructed a two-story inn, golf course, and tennis court. The resort was so successful that they rebuilt, and even expanded it in 1932, after a fire destroyed all but three small historic outbuildings on the site, which remain today as guest cottages.

A passionate raconteur of the inn’s history, Manager Mark Jones points out that “the new inn was built at the height of The Great Depression, so the least expensive woods available were used, including pine, hickory, and wormy chestnut.” Difficult to procure these days and much sought after for its unique appearance, aged chestnut is just one of several materials used throughout the inn, whose character just cannot be easily reproduced. “If you look at this handrail here, you’d think it was shellacked, but this shine comes from 70 years of guests rubbing their hands on the wood,” says Jones.

Preserving the rustic architectural beauty and simple, back-to-nature aesthetic for the 21st century, a new generation of McKees is committed to keeping things just the way they’ve always been. That’s why none of the rooms have telephones or televisions, and only a few have air-conditioning—an unnecessary amenity at Cashiers’ 3,600-foot elevation. According to the inn’s brochure, “High Hampton is not for everyone.... If your preference is for ‘posh and glitz,’ our services and facility will fall short of your needs.”

Apparently, this has not proven problematic. Five- and six-generations later, families still return to the inn while newcomers continue to discover it—making it next to impossible to get a premier window seat in the dining room. “There is a pecking order for tables,” says General Manager Clifford Meads. “If you’ve been coming here for 25 to 30 years, you’re working your way up to a table with a view of Rock Mountain.”

Unlike the old inns in Linville and Cashiers, The Orchard in Saluda wasn’t originally open to the public. Built by the Brotherhood of Clerks for Southern Railway in 1926, the simple farmhouse-style lodging was created as a getaway for railroad employees and their families. Although Saluda lacks the lofty altitude of Linville and Cashiers, it’s located well above the Eastern Continental Divide—and far cooler than South Carolina, Georgia, and Louisiana, where most of the clerks resided.

Deep porches on all four sides of the inn, originally called The Mountain Home, allowed guests to circumnavigate the building as they sought the coolest spots throughout the summer days. “Sitting in rocking chairs or playing cards and checkers was the primary pastime,” says Kathy Thompson, who with her husband, Bill, now owns the inn. The second floor originally offered 10 guest rooms with communal baths that were designated for clerks with families. Unmarried clerks were given more primitive quarters in a bachelors’ bunk room on the first floor. All the guests shared the spacious first-floor lobby, which served as both living and dining room. The area—with its wood floors, timber posts, and windows and doors opening to porches on all sides—was, and remains, a breezy retreat.

“Each of the inn’s owners, whether the railroad or the innkeepers, have made changes and improvements over the years,” says Kathy. In the 1930s, the bachelors’ quarters became a kitchen and the back porch was converted into a dining room with a wall of windows framing a clear view of the valley below. Today, the restaurant is open not only to guests—some who have been known to reserve the same table throughout their stay—but to the public as well. Guests enjoy drinks on a stone terrace beneath an arbor overgrown with grape vines and wisteria or in the bar, tucked into an enclosed side porch, that was a favorite haunt of Saluda’s best-known resident, singer Perry Como.

In the 1930s, three tiny cottages were constructed to accommodate the inn’s staff, and two more were added this century. All built in the same simple style as their predecessors and painted buttercup yellow, the cottages offer guests a bit more spaciousness and seclusion than the inn’s rooms. Modernized in the 1950s, these rooms all have private baths, but their antique furniture—old iron beds and colorful hook rugs—create a purely vintage atmosphere. While all the rooms have air-conditioners, most people don’t use them. “They come from other places because they want to breathe mountain air,” says Kathy.

Perched on a mountainside of the awe-inspiring Blackberry Gorge, Blowing Rock stands as one of the Blue Ridge Mountains’ most dramatic and oldest resort towns, founded in the 1870s. The houses that line its winding streets reflect the full range of styles that were popular in the late 19th century. The most distinctive dwellings, however, are the stone compounds and castles overlooking the gorge, where they command sublime views of rippling mountains. None of the town’s original hotels were built in this rugged style, but in 1982, the Gideon Ridge Inn opened, making it possible for guests to spend the night in a stone house on the edge of infinity.

While a stone house might sound less than cozy, the opposite proves true in this former residence built in the early 1940s as a summer retreat for the Lindau family of Boston—relatives of denim producer, Moses H. Cone. In addition to 10 bedrooms, the inn also has an inviting library and sitting room with an exposed-beam ceiling, a six-foot-wide stone fireplace, and French doors that open to a covered porch overlooking the gorge.

Proprietor Cobb Milner, who cares for the inn with his wife, Cindy, enjoys showing off the house’s stone walls. The material was quarried from nearby Grandfather Mountain, stacked horizontally, and held in place by mortar hidden deep within the crevices. “Soon after we took over the inn from my parents in 1991, I enrolled in a course in rock masonry so I could learn how to make repairs,” says Cobb, who built a low wall enclosing a terrace. Unhappy with the wall’s appearance, Cobb discovered a recipe for mixing moss and lichen in a blender with buttermilk, which encourages it to grow on the rocks, creating the patina of age.

However fascinating the inn’s masonry, the surrounding landscape is the main attraction, whether it’s the hillside garden and lawn that slopes away from the house or the gorge and mountains beyond. Strolling in the garden and finding a quiet nook for conversation, taking in the grandeur of a mountain sunset from the stone terrace or porch, or stretching out beside the fire with a good book or a glass of wine—these are the leisurely pursuits the inn invites. “Our goal is to allow our guests to get away from the hustle of their lives and reconnect with what’s important,” says Cobb. “That’s what this house was originally about.”

Cobb, like every inn owner around here, understands what it means to create a legacy for his relatively young resort. It’s equal parts upkeep of the wood, stone, and architecture, as well as ensuring that today’s guests experience the same sense of escape others did in Western North Carolina so many decades ago.