Hands-on House: A couple tackles the monumental task of building their own home from the ground up 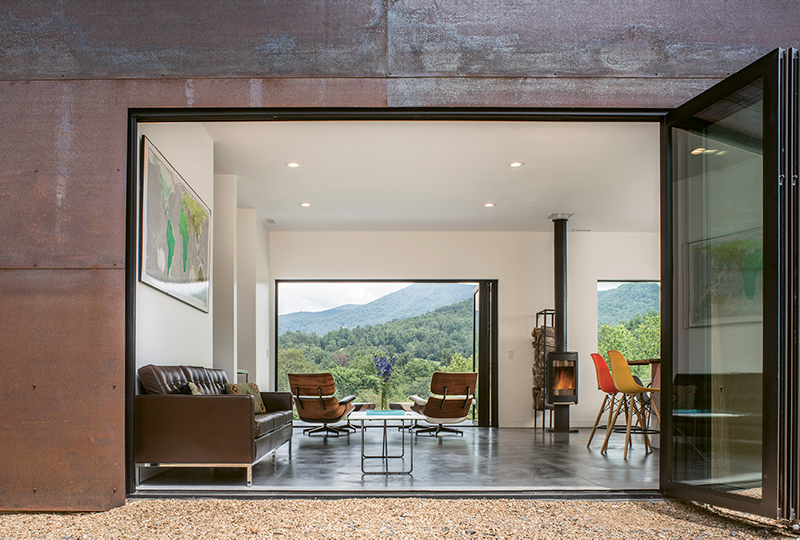 For many of us, even in the do-it-yourself era, “building” a new home means finding a development, picking a floor plan, selecting paint colors, countertops, and tile, and waiting for the work to be done. If we’re more hands-on, the process might involve frequent sit-downs with an architect and an interior designer for a custom approach. But very few of us ponder the how-tos when it comes to setting the forms for the foundation, framing the walls, hanging the sheet rock and siding, and all the other steps that actually create a structure.

So you can’t completely blame Carla and John Barnard’s families for their skepticism when the couple explained that, yes, they were really and truly constructing a home with their own hands in a town they’d just recently discovered in the Blue Ridge Mountains. Even when they explained, the response was “a giant eye roll,” John says with a laugh. “It was a process of peeling back the layers of disbelief. They had to see it to believe it.”

The Barnards were both interested in design and architecture, but it took some time for a plan to germinate and bloom into a full-blown obsession with building their own house. Living in London, the couple were growing more and more discontent with the corporate takeover of their lives (he worked in finance and she in real estate law). They were reaching the point of burnout and decided they had to find a solution or simply stop complaining. “I came home, and John jumped on the couch and said ‘I’ve got it,’” Carla says. His proposal: Get an RV, drive across the United States, and find a spot where they could build the modern home they’d imagined.

The adventure began, and they toured the landscape for a year. After flirting with the idea of settling in California, and being let down by a four-acre short sale in Oakley, they found a bucolic spot just east of Asheville overlooking a valley and mountains in the distance that harbor a stretch of the Blue Ridge Parkway.

Living in the RV, they embarked on the project with “silly, blind optimism,” according to John, but also with guiding principles. The goal: Make deliberate choices that embody simplicity and straightforward design. Plus, they didn’t just want a modern house, they wanted to learn the ins and outs of how to make a modern house. “We liked the idea of knowing how things work,” explains Carla. “We wanted to feel practical and useful in a real way.”

They chose architect Myles Alexander of Form & Function Architecture to lead the way. He stood out for his strong design sense complemented by a down-to-earth know-how. For instance, if they wanted to build a glass shower, Alexander could tell them exactly what it would cost and how challenging each task would be—no abstract numbers, no sugarcoating the difficulties. Plus, he spoke from real experience after building his own home from scratch in Woodfin, north of Asheville.

“They didn’t know enough to think they couldn’t do it,” says Alexander, who admits he harbored his own doubts as he saw them pour blood, sweat, and tears into the project. “I thought once they saw the size of the elephant they had to eat, they’d quit, but they kept going.”

Once the work began, a funny thing started to happen. Curious neighbors began stopping in to see what the newcomers were up to, ask questions, and even offer encouragement. The couple’s can-do attitude became contagious, and some brave souls began pitching in, including their 80-year-old neighbor who leapt from truss to truss while assisting with the roof. “Every single person we know or connection we have, we’ve made through the house,” says Carla, expressing gratefulness for her newfound community.

Mentored by YouTube tutorials and gleaning bits of information from their experts, the work moved forward, and their trade skills grew. “Once you get started on the road, your confidence builds, and you’re emboldened to do something else,” Carla says.

They hammered together forms to hold the concrete for the foundation. They framed the walls for the 1,780-square-foot floor plan. They hung sheetrock until John’s arms went numb each night. They rose at 4 a.m. to work on the roof before the heat of the day set in. Carla graduated from carrying one 2x4 at a time to an armful without a second thought. John even hoisted the 200-pound sheets of metal into place to wrap the exterior of the house. “It was our version of Outward Bound,” John says.

After all exhaustion and muscle gain, Carla is perfectly clear about the toughest task they faced. “Tiling is for suckers,” she says. “It’s what finally broke us.” And yet, they persisted, and finished the floor-to-ceiling shower enclosure in the master bathroom.

Touring each room, there is no question they mastered all of the YouTube lessons. Inside and out, there are no signs two amateurs created the space, but what they are the proudest of isn’t the effort, it’s “honesty of the materials,” John says. “Steel is steel. Wood is wood. Bark is bark.”

The corten steel that clads the house is the same material used to make shipping containers. It will age gracefully, rusting to a color that matches the soil, and it will never need a coat of paint. The bark comes into play in the foyer. Walking in the front door is like stepping right back outdoors, as wood climbs the walls and highlights a floor-to-ceiling view of the mountains.

The house is based on a dog trot floor plan, wherein two parts of the house are divided by a breezeway to keep quarters cool. In the old days, this space fell between the kitchen and sleeping areas. In this contemporary take, the foyer, with its out-of-doors feel, keeps the master suite private from the rest of the house.

The kitchen, living room, and dining area are harmonious in one large, airy room flanked by enormous windows. Simple and repurposed materials kept the project on budget and in keeping with the modern mission. The Habitat ReStore in Asheville became a go-to spot for treasures. An $8 pallet of sound insulation was cut into triangles and painted white, orange, blue, and gray to craft an accent feature on the kitchen island. An industrial-size skylight in the guest bath floods the bathroom with rays of sun. Even the appliances were second-hand finds. The biggest splurge was the glass accordion doors that lead out to the 900-square-foot porch and the captivating mountain scene.

And even though the couple started fresh in the States, they didn’t toss aside all their furniture before the move. Among the items that made the journey from England is a low profile, sapphire blue velvet sofa and a rocking chair passed down from Carla’s grandfather that sits on the front porch. “Something from Cookstown County, Dunkirk, is sitting right here in Asheville, North Carolina,” Carla says about the heirloom.

The entire project took 18 months, and these days, the Barnards are welcoming a lot of folks who wondered what they were up to all that time. Family and friends from here and abroad come for the plum accommodations, the beer, and the barbecue, and to be wowed by a major accomplishment. And still, the couple remains humble.