Halls of History: Tour a few of WNC’s intriguing homes for a greater perspective on our region's early days 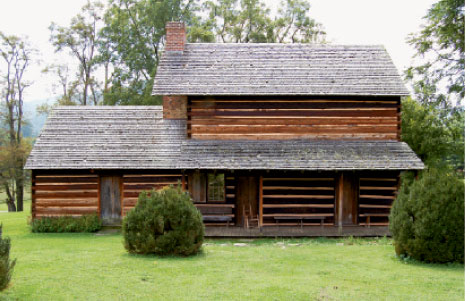 Vance Birthplace
The boyhood home of North Carolina’s 43rd governor awaits in Weaverville. The large yellow pine log cabin where Zebulon Vance was born in 1830 still contains some of its original furnishings. Six outbuildings, including the loom house, smokehouse, and slave quarters, dot the property. Seasonal reenactments by costumed interpreters demonstrate the daily activities of the Vance family. nchistoricsites.com/vance

The Zachary-Tolbert House
Built in 1842 by one of Cashiers earliest settlers, Mordecai Zachary’s home features distinctive Greek revival architecture and the world’s largest collection of Southern plain-style furniture, typical of 19th-century farmhouses and crafted by Zachary. The home’s exterior looks deceptively new, but the lack of electricity, plumbing, and heat are reminders of early American life. cashiershistoricalsociety.org

Thomas Wolfe Memorial
Immortalized in Thomas Wolfe’s novel Look Homeward, Angel, the yellow clapboard, Victorian dwelling in Asheville where the famous 20th-century writer lived offers a glimpse into his childhood. The family home and boarding house that his mother operated features furnishings from Wolfe’s adolescence, and remains almost identical to when he lived there. Exhibits about his life and family, including artifacts from his father’s stone-cutting shop, and an audio-visual presentation, are offered at the visitor center adjacent to the house. Guided tours are also available. www.wolfememorial.com

Banner House Museum
Samuel Henry Banner helped found Banner Elk, and his home is an accurate glimpse into mid 19th-century life in the High Country. Banner lived in the white clapboard house with his wife and their seven children. Many of the rooms have been renovated to depict what the home would have looked like when they lived there, and the museum features collections of letters and documents highlighting the pioneering settlers of the region. The Banner House Museum also offers audio tours for $5. www.bannerhousemuseum.org

Smith-McDowell House Museum
The four-story mansion, built by James Smith, a wealthy WNC entrepreneur, is not only Asheville’s oldest surviving house (it was built in 1840), it’s Buncombe County’s oldest brick structure. Many of the walls are 20 inches thick, a testament to an architectural style uncharacteristic of homes in antebellum times and proof of Smith’s fortune. Three of the original outbuildings—the summer kitchen, laundry facility, and slave quarters—still stand on the property. The house features exhibits about the residence, as well as topics ranging from Native Americans and early European settlers to the Civil War and construction of the railroad through Buncombe County. www.wnchistory.org

The Shook-Smathers House
The Shook-Smathers house in Clyde boasts unique mountain craftsmanship and architecture. It was built in the late 1700s when WNC was still open frontier by some of the first inhabitants of the area, the Shook and Smathers families. Preservation specialists from North Carolina claim it’s the oldest wood-frame building in the Blue Ridge Mountains. The dining room ceiling is wood-beamed and many of the walls are paneled with apple, pine, oak, chestnut, and cherry woods that were available on the property. The third floor houses a chapel where the first Methodist bishop in North America, Francis Asbury, is said to have spoken during a short visit. www.shookmuseum.org

Historic Carson House
The large, three-story home of Colonel John Carson, a Burke County representative at the 1789 Constitutional Convention, is a glorified log cabin, built and remodeled in stages between 1793 and 1841.It served as McDowell County’s first courthouse and Davy Crockett and Andrew Jackson were common guests. Today, with the exception of the Lowcountry-inspired porch and stylish clapboard trim that Carson’s son added after his father’s death, the home stands relatively unchanged. Inside, much of the original furniture remains, along with an expansive collection of historic books. The Mary M. Greenlee Genealogical Research and History Room’s archives are on site and open to the public. www.historiccarsonhouse.com

Carl Sandburg Home
Pulitzer prize-winning poet and writer Carl Sandburg lived on this estate with his family for 22 years. Lilian Sandburg’s goat dairy is open for self-guided tours, and peaceful trails around several rock outcroppings where Carl often wrote invite exploration. In the summer, park rangers offer bird walks and short demonstrations on activities like cheese making. Visitors rarely spend less than two and half hours on the property, so pack a lunch and pick up a map. www.nps.gov/carl/index.htm