A Full Plate : From opening a new studio to teaching, ceramist Jason Bige Burnett is in art overdrive 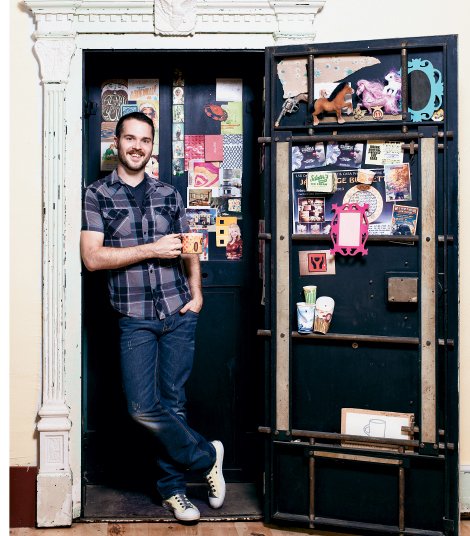 No one needs to know the story behind the designs on Jason Bige Burnett’s functional ceramics to appreciate the pieces. The sophisticated color palettes, the patterns and prints with cheeky pop culture references—they’re visually appealing “adornments for the domestic landscape,” says the Bakersville artist. But the images—a hand-drawn swirl or galloping horse, for example—are full of meaning, drawn from Burnett’s memories and experiences. The horses reference his native Kentucky, while the swirl or patch of gold luster snatched from his subconscious recall the trim on his grandmother’s dress or the epaulet on a military uniform from the academy where he spent his teens. The surface of the clay is a canvas for compositions that reach deep.


As an undergraduate, Burnett studied graphic design, but grew dissatisfied. “I hated that there was nothing between me and the computer. I wanted to make something with my hands,” he says. Discovering the process of screen printing on clay was a revelation. Now he uses the computer to design decals, then transfers the images to his clay surfaces after an initial firing. Three more firings follow, during which time he applies glazes, building up the luster to produce the final product. Burnett isn’t so concerned about form: He favors simple, utilitarian cups and plates. It’s the surface design that drives him, and his sense of humor, attention to detail, and technical mastery add up to a fresh approach.


On the path to becoming a successful working artist, Burnett’s learning curve seems to have been remarkably gentle. Even before graduating from Western Kentucky University in 2009, he was a Core Fellow at Penland School of Crafts, had landed his first solo show, and exhibited his work internationally. It wasn’t long after his fellowship that he started teaching at Odyssey Center for Ceramic Arts in Asheville, began guest curating exhibitions, and became an artist-in-residence at Arrowmont School of Arts and Crafts in Gatlinburg, Tennessee.


In January 2012, a craving for the kind of community of artists he experienced at Penland led him to launch the Ceramic Surface Symposium at Arrowmont, an annual retreat that gives working artists an opportunity to meet and support each other and exchange ideas. For Burnett, the richness of friendships made provides inspiration for the work he brings to the table.


All this success hasn’t gone unnoticed: Earlier this year, Ceramics Monthly named Burnett an emerging artist to watch. Between producing his work, teaching across the country, and renovating a former bank to create a studio on Bakersville’s Main Street with his husband, Michael Hale, Burnett’s plate is brimming.