Home /Easy Does It

Easy Does It: Josh Dorfman, aka The Lazy Environmentalist, mounts a casual crusade for sustainability 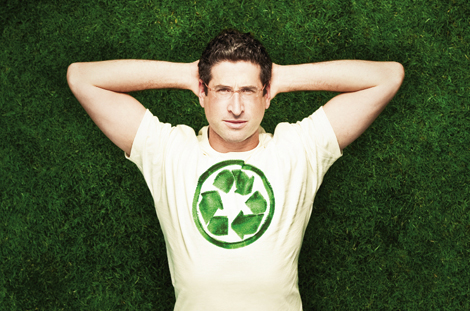 Recycling: it’s a chore. taking public transportation: an inconvenience. Reducing your home’s carbon footprint: Who’s got the time? The planet may be going to hell in a handbasket, but there’s no shortage of excuses for opting out of environmentalism.

Here to save the day for would-be (but unmotivated) supporters of sustainability is Josh Dorfman, who argues that not only is sustainability easier than you think, it’s also in your best interest in ways you might not expect. “Going green can actually increase your quality of life—it doesn’t have to be about sacrificing,” he says. He’s spread that message through a weekly radio show, two popular books—The Lazy Environmentalist: Your Guide to Easy, Stylish, Green Living and The Lazy Environmentalist on a Budget—as well as a Sundance Channel TV show of the same name, which recently completed its second season, and a green-communications consultancy.

Though he’s only 38 years old, Dorfman’s résumé reads like that of a globe-trotting retiree. Born and raised in New York state, he’s studied and worked in China, France, Switzerland, and many locales in the United States. A few years ago, he earned an MBA with an eye toward doing business on a foreign continent. But when he and his girlfriend decided to leave New York City a year ago, they picked Asheville.

From here, Dorfman is continuing his campaign to change our lifestyles in a fashion that just might save the world from climate calamity. He belies the stereotype of the earnest environmentalist. He’s a busy fellow, of course, but he’s surprisingly laid back. Quick with a smile, a joke, an ironic comment, he’s no in-your-face activist, and he’s ditched all the conventional green guilt trips. That’s why, almost counter intuitively, his message might reach you. “This is a serious problem, but being serious about it doesn’t seem to be the best way to get people on board with actions that are going to solve it,” he says.

So what drove Dorfman to take the actions that have made him the quintessential and quasi-celebrity Lazy Environmentalist? He had his environmental epiphany in 1996 while working as a quality-control executive for a Kryptonite bike lock factory in Nanjing, China. Knowing that bikes would eventually be edged out by cars, “I came to the realization that there were going to be a billion cars there,” he recalls. “I thought, ‘I don’t know much about climate change, but I understand enough to know that this is probably going to be bad—potentially really bad. There will be like five times the number of cars we have in the U.S. What are we going to do then?’”

Dorfman’s concern festered for a few years, he says, until he resolved to “try to help people make better choices in their lives that will reduce their environmental impact.” And as if he wasn’t busy enough, he’s got even more lazy environmental ventures in the works, as he told WNC during a recent chat. 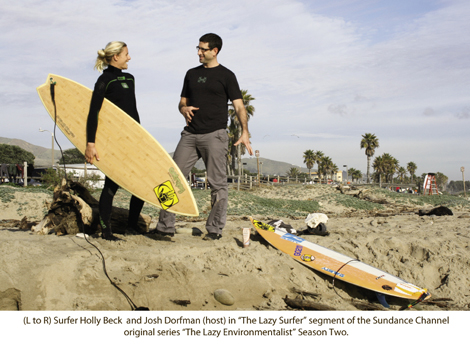 With your books, radio and TV shows, and speaking engagements, along with other commitments, how can you call yourself lazy?
Just ask my girlfriend [laughs]. The notion of The Lazy Environmentalist is actually based on the idea that we’re all incredibly busy and stressed out, with so many competing priorities. We care about the environment, but we care about other things more—our job, our family, having the right car, or having the jeans we want—so those things tend to take precedence when it boils down to decision time. Mostly, The Lazy Environmentalist is about trying to figure out how to make it easy for people to find good choices that are going to fit their lives. It does also recognize that we’re pretty lazy, and that change is hard.

Given your work and your message, do you feel an inordinate amount of pressure to live green?
The thing is, I’m The Lazy Environmentalist—I’m not The Hard-core Environmentalist. And my basic premise is that if going green is a matter of our self-interest, and we can increasingly provide options for people that [help them act] in their self-interest, then I’m going to do it. But like a lot of other people, if it’s not easy—if it’s a chore—I’m probably not going to do it.

What’s the topic of your next book?
I’m working on a book about green communication. And principle number one is, if you want to get someone on board with taking environmental action, don’t talk about the environment. Talk about all the reasons your solution is going to make their life better, based on what they value. Otherwise, you’re wasting your breath. I’ve been focused on distilling everything I’ve learned about getting people on board with change through the radio show, TV show, and other experiences, especially people who don’t want to be on board. It’s about finding what works to convince them that going green will be good for them. 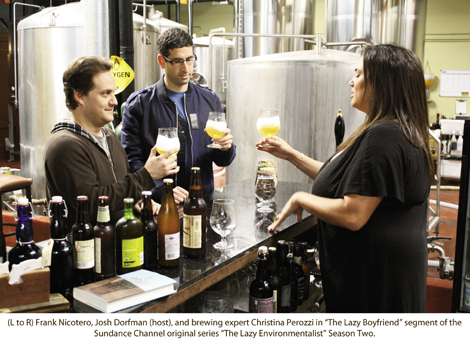 Do you have critics who say your
approach is moving too slowly and not calling for enough drastic action?
Yes, I get that often. And I agree with that, actually—that what we have to do is take immediate, aggressive action. The challenge is that, as a culture, we’re not ready to act on that knowledge. The science is overwhelmingly clear that a major catastrophe is coming unless we change extremely fast, and yet we’re sort of in this deer-in-headlights kind of moment. So my philosophy is, let’s see what we can do to get at least some change happening; I’m interested in finding the levers that are going to affect change now.

What brought you from the big city to Asheville?
We chose Asheville for a lot of the obvious reasons—the beauty of the area, the great downtown, all of the sustainable activity here. But the thing that has stood out the most to me about Asheville is that you get the sense that whether you were born and raised here or you moved here, everybody loves being here, and that creates a really cool vibe. 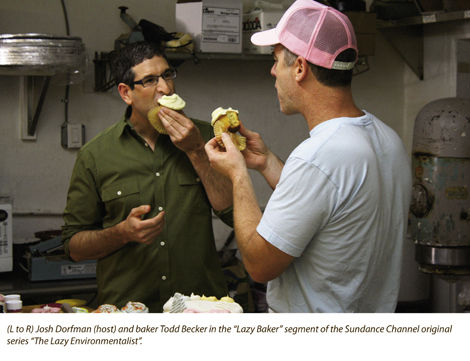 In what ways do you personally find it hardest to live sustainably?
I’m still taking long showers; I do my best thinking in the shower. I know I should change that. It’s hypocritical, but since that’s the way it is, the question is, how are we going to deal with people like me to reduce their impact now? For example, can we reduce the cost of solar-powered water heaters so that I can actually own one? Or, can we make low-flow showerheads that have good pressure, so I actually want to buy one? Also, I’m a pretty bad recycler. I really hate recycling. So that’s how I’m lazy.

Since the recent birth of your first child, what have you learned about eco-friendly child-rearing?
I’ve learned that when we have our next child, we will ask that people who are very generous in sending us lots of stuff to simply make a donation to their local orphanage. We got a lot of baby stuff, and we’re just not stuff people. What I’ve learned is that babies create a ton of waste, and I have a lot more empathy [for people who use] disposable diapers. Like a lot of people, we tried cloth diapers for a while, but now I can see that there’s a reason why disposable diapers are clogging up landfills. But he’s a pretty low-impact baby.

Do you have any new eco-endeavors on the horizon?
One of the things I’m most passionate about right now is creating a news media company—essentially a website. We’d hire college journalists from all over the country, and their whole mission would be to go into their local communities and find evidence that going green is working better than the status quo to deliver on the things that matter to Americans right now. How is green creating or saving jobs? How is green making schools better? Communities safer?