Home /Do the Hops

Do the Hops: A crucial ingredient takes root in WNC 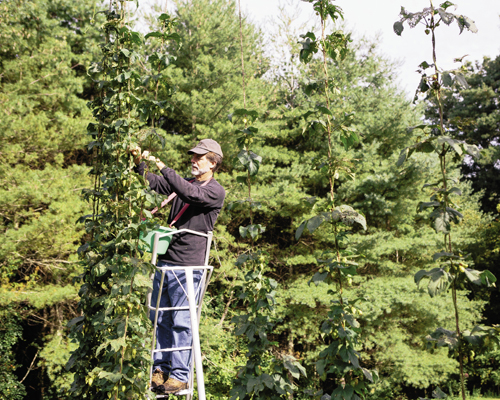 Brewers and economists agree: Not much can stop Asheville’s craft beer industry now, except maybe an economic crisis or environmental disaster. But there is one ingredient in beer that causes some concern: hops. The green, cone-shaped flower provides beer with its sharp, tangy quality, and it’s in high demand.

“The hardest thing about owning a brewery is locating hops,” says Doug Reiser of Burial Beer. “We’re relying on these independent farmers to get the job done for us. That’s kind of a scary thing.” Craft brewing represents about eight percent of the American beer market, but it uses 40 to 50 percent of the hops, according to the Brewers Association. Even as farmers plant more hops, the price rises, and each year there’s talk of a shortage.

In response, Dr. Jeanine Davis of North Carolina State University started researching the potential for WNC hops farming in 2009; the effort is known as the North Carolina Hops Project. Today, she estimates there are about 80 hops growers in the state who cultivate at least a quarter-acre of hops, enough for about one small batch of wet-hopped beer. Hops grows best in areas with lengthy summer days. In the Pacific Northwest, where hops flourish, days are sometimes an hour and a half longer than those in WNC. “If you look at our yields compared to what they get in the Pacific Northwest, our yields are quite small,” says Davis. “I think for a number of years it’s going to have to stay that specialty product.”

But despite this limitation, Davis is optimistic: The researchers learn more every year and yields improve. So while the local hops industry doesn’t support craft beer yet, it does result in seasonal specialties, such as Lookout Brewing’s Van’s Front Porch Pale and Hi-Wire’s Wet-Hopped Double IPA.