Home /A Cut Above

A Cut Above: At the hands of Leo Monahan, paper takes on a colorful, three-dimensional life 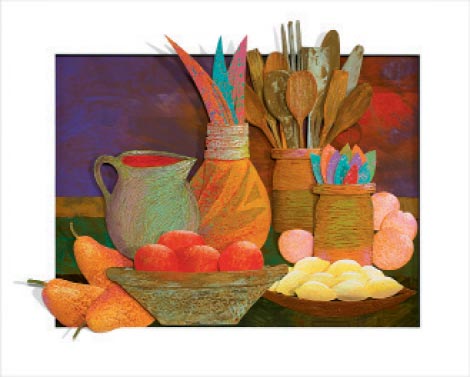 You can do four things with paper. You can cut it, bend it, fold it, and paint it,” says Leo Monahan. Using these principles, the Barnardsville-based paper sculptor transforms the medium from a flat plane into three-dimensional forms animated with detail, depth, and color. A piece commissioned by the Joffrey Ballet in California bears hundreds of fine cuts layered to form the elaborate, pink headdress of a dancer. The feathery lures in Monahan’s fly-fishing series are wispy and light, the hooks appear dangerously real.

Layering, wrapping, and even weaving the paper, Monahan enhances his intricate relief sculptures with meticulous detail, adding the tiniest of elements—buttons on shoes, fanciful bows on pretty girls with long eyelashes, and spiky scales on fire-breathing dragons. Unlike traditional sculptors, he doesn’t chip away until he finds the subject. Using two- or three-ply Strathmore paper, Monahan draws with an X-ACTO knife, deftly cutting outlines from paper. “I cut everything I think I might use first, then I paint it, then I start experimenting,” he says. “I never follow a plan.”

Much of Monahan’s art reflects the landscape of his birthplace, the Black Hills of South Dakota. His Tom Sawyer-like childhood spent in the shadow of Mount Rushmore inspired some of his favored Native American pieces, the fly-fishing series, and numerous nature scenes.

After serving in the Korean War, Monahan studied at the Chouinard Art Institute in Los Angeles, receiving the first Walt Disney scholarship. During his more than 20-year career as a graphic designer in California, he pioneered paper sculpture in advertising—his first piece was an album cover for Liberty Records in 1960—and received the Society of Illustrators of LA Lifetime Achievement Award. By 1987, he had left his career in graphic design to concentrate on paper sculpture as fine art. Today, one of his pieces is in the permanent collection of the Smithsonian Institute and his work sells world-wide.

For such an illustrious career though, Monahan admits he doesn’t always get it right. “I use a lot of paper,” he says, noting that it can take two or three tries before he’s satisfied with a form. While the notion of “less is more” is a motto for some, for Monahan, the appropriate idiom would be “more is more”—more detail, texture, and color—and the result is breathtaking.

Learn more about Monahan at www.leomonahan.com.