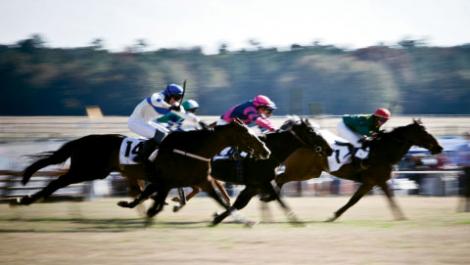 Wispy-slender jockeys sitting high in saddles wear jerseys of purple and cream, or pink polka dots, or stripes of aqua and teal. Horses with coats of tan, black, and smoke gather at the starting lineup on the grassy track. They quiver, some rearing back, snorting.

All of this, and a bugle sounding, and an announcer’s voice crackling through the tall pines that shade the paddock and grandstands at the Springdale Race Track in Camden. Everything is sharp and vivid, and we are wearing the proper ribbons to give us all of the access to the track and grounds that we’d like. (A privilege you must pay for, or, like us, be working to get.)

“It will be different than the hazy infield crush you remember from back in college,” we’d been told by a man we’d met the night before on Camden’s Broad Street. (This friendly man in a blue sport coat had, like us, been dipping chunks of hot fried okra into a spicy sauce that chef Jamie Hecker—now executive chef at Mill Pond Steakhouse—had brought out for the happy hour crowd. We got to talking, and I mentioned that in the late 1980s I’d borrowed a linen dress and gone to the spring steeplechase races in Camden—the Carolina Cup—with two carloads of college friends. I remember wandering off and catching glimpses of one race beyond the fenceline, but that day was mostly about the tailgating—the food, drink, and socializing in the enormous sea of the infield crowd.) “The Colonial Cup is a quieter day, less crowded,” our new Camden friend told us. “You’ll actually see horses this time.”

He was right. On the clear, bright Sunday of the steeplechase races, there were eight events, including the Colonial Cup with its $150,000 purse. And we saw them all. A highlight was the third race of the brilliant fall day, the event for three-year-old ponies. The young horses were edgy, new to the game. There were several false starts. Then, finally, they ran. Grass and distance kept down the noise, but the speed was easy to see—the soft thundering along a two-mile course with more than fifteen fences to jump. And then a finish that went down to the wire, to the nose.

Everywhere, the previously soft-talking crowds in the grandstand and infield and along the fences leaned in, and a rumble of shouts grew. I heard someone say, “I’d just drop his head and let him off.” As the race continued, “Oh my God, we have a shot.” The horses pounded past the grandstand again, this time caught in filmed finish. “It was ‘Sermon of Love’ with the win or was it ‘Slip Away’?” the announcer called, explaining that the results would have to be verified.

Quiet now, the grandstand crowd waited and watched. The ponies’ coats were frothed thick with salty perspiration. Trainers wiped their horses down, threw blankets on their backs, walked them. In a few minutes, the winning rider, owner, trainer, and horse were named and photographed. (Yes, it was Sermon of Love.) There were smiles and handshakes, the respectful round of applause. And then? The crowd went back to conversations or tailgating, or over to the paddock for a closer look at the next group of horses and jockeys getting ready to race.

This was the rhythm of the day at the track. Set thirty-two miles northeast of Columbia, Camden is about 130 miles from Greenville, depending on the route, which can be mostly highway (I-385 to I-26 to I-20), or include any number of two-lane roads (including SC 215 and US 1).

Spectators often don fine tweed blazers, wool sweaters, and wraps for the fall event, paired with boots and all manner of hats and caps, many with bright feather plumes. In fact, tweed attire is officially encouraged for men and women at the Colonial Cup, to be Sunday, November 16, this year and November 15 in 2009. At the larger spring race every March, the Carolina Cup, the suggested attire is sport coats, oxford cloth shirts, and ties for men; and dresses or sundresses and hats for women. (For ticketing and other details, visit www.carolina-cup.org.)

Besides the races, we took some time that weekend to drive and walk around Camden, which was established in 1733 and is South Carolina’s oldest inland city, with horse pastures and barns all around.

The slow-paced town obviously honors speed: Besides seeing racehorses at the track, we watched Jack Russell terriers being timed through a maze of tunnels and caught the start of a hundred-mile bicycle ride that would tour the rural roads and finish downtown. And less than an hour away, cars often roar around the Darlington Raceway.

Just off the main road into town from Interstate 20, we stopped at the reconstructed palisade fence at the Historic Camden Revolutionary War Site and walked in the gift shop and historic buildings displaying remnants of the 1780-1781 occupation of Camden by British troops, including musket balls, spoons, decks of cards, and a red wool cap sewn with the words “Liberty or Death.”

On Broad Street are antiques stores, galleries, barbershops, and the tiny Christmas Shoes store. When we visited Antiques on Broad, a hospitality table was set with cups and coffee, along with a ginger ale punch (in a bowl with an ice ring!) and crackers with cream cheese and pepper jelly. The Rutledge Street Gallery was hosting an art opening with twenty-five to thirty paintings by William McCullough, who owns a farmhouse in Kingstree tobacco country. (We had a chance meeting with “Bill” in Camden at a restaurant across the street. He was in town for the art opening.)

On Saturday morning—the day before the Cup—we’d driven a few miles south through the countryside to Boykin, where tin-roofed buildings are near an old settlement and Civil War battle site known for its water-powered flour-and-grits mill. The Mill Pond Steak House is housed in two simple wooden buildings at the edge of the cypress- and pine-rimmed pond. The restaurant—known for its steaks seared in black iron skillets—hadn’t yet opened for the day, but a chef was in the yard outside, already in his chef whites. Why? To mind the two hundred pounds of pork he’d started smoking the night before—the key ingredient for barbecue he was making for spectators at the Colonial Cup the next day. He opened the lid to the roaster and we breathed in the smoky ham flavors.

Later, after stopping at the Boykin Company Grille across the road for a paper bag of Squirrel Nut Zippers, black taffy, and other 10-cent candies, I looked back at the Mill Pond roasters and watched the steam and smoke rise into the wintry blue sky.