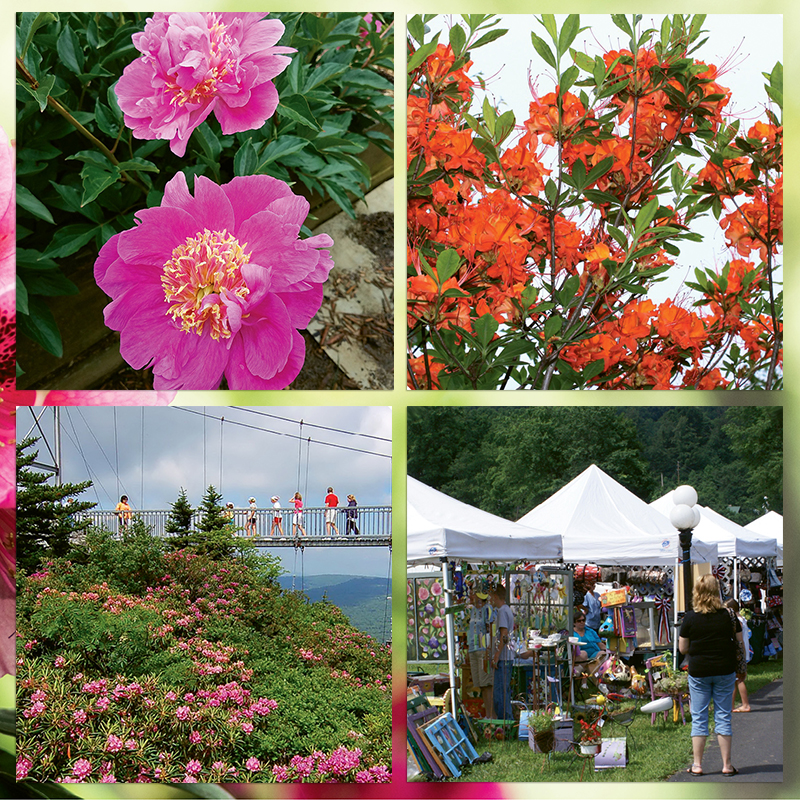 Festival of Peonies in Bloom

In the spring and summer when Haywood County chef Ricardo Fernandez isn’t catering private parties or hosting culinary tours in his native Argentina, he and his wife tend to their peonies. He has one of the largest collections of peonies in the region, and this year is inviting the public to his garden during a monthlong celebration. Daily from 10 a.m. to 4 p.m., visitors can enjoy the vibrant fuchsia and pale pink blooms and purchase plants and flowers to take home. wildcatridgefarm.com

Don your hiking boots for guided 20-minute tours with park naturalists to view Grandfather Mountain’s rhododendrons in bloom. It’s an opportunity to learn about the native plant’s history, ecological importance, and beauty. The event culminates June 8 with a day of special programming at the Nature Museum, where you can talk with native flower experts and pick up maps to seek out the most brilliant blooms on the mountain. grandfather.com

Robbinsville became one of only two Azalea Cities in the state last year for its efforts in preserving and protecting native azaleas, so it makes sense that the town has a festival dedicated to the flower. Festivities include guided hikes on Hooper Bald to view six rare species of azaleas, an auction at the Stecoah Valley Cultural Arts Center, and live music. According to Revonda Williams, former Graham County TDA board member who heralded the designation, “Through the Azalea Society of America’s efforts, combined with help from locals, we were able to get the classification of Azalea City, and we want to celebrate that with all of WNC.” grahamcountytravel.com

Back for its 73rd year, this festival celebrates Mitchell County’s rich traditions of art and community. Bakersville is home to one of the largest thriving art communities in the state, so plenty of local creators will showcase their wares at the craft fair. The weekend also includes the crowning of the Rhododendron Pageant queens, live music from Tellico and Buncombe Turnpike, a classic car show, 10K run, and a street dance. ncrhododendronfestival.com

Did You Know? When it comes to pollinating the fiery flame azalea (rhododendron calendulaceum), bees come up short. In fact, because of the flower’s unique reproductive structure, whereby both the anther (male) and stigma (female) parts are separated from one another, only insects with an ample wing span can effectively navigate the flame azalea’s broad blooms. While butterflies are often considered to be poor pollinators, in this case, they soar above the competition.