Best of Festivals - CULTURE: Mark your calendar! From food and drink fêtes to cultural celebrations and musical blowouts... 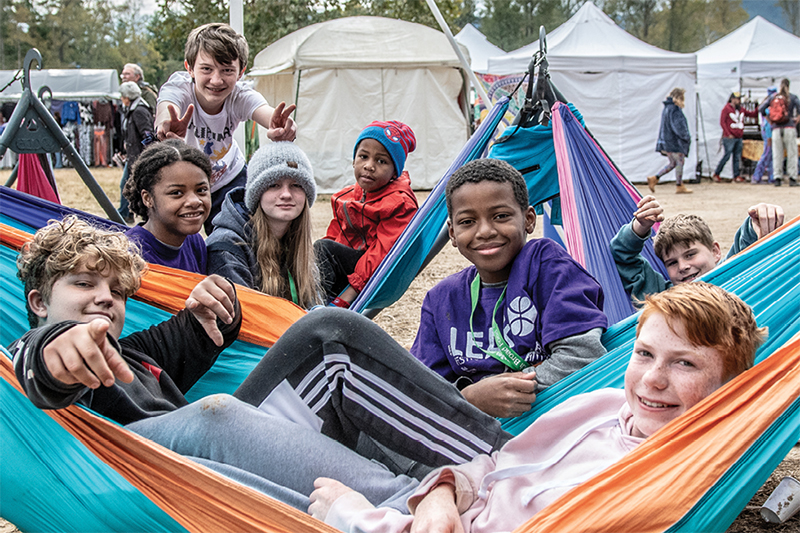 Every spring and fall as the leaves change, the beautiful grounds of Lake Eden draw festivalgoers young and old for a cultural arts celebration that benefits LEAF Community Arts, an Asheville-based nonprofit that provides arts education in Western North Carolina and in 10 countries around the globe. While healing arts, culinary offerings, and plenty of children’s and outdoor activities abound, it’s the musical artists bringing that international edge that sets this festival apart. Expect to hear everything from West African afrobeat to Colombian hip hop to Haitian roots music to Brazilian samba, as well as old-time mountain jams. Each festival brings an eclectic mix to multiple stages, including some noteworthy headliners. The spring 2020 lineup includes French electronic musician CloZee, Grammy award-winning bluegrass act The Del McCoury Band, and Preservation Hall Jazz Band. Can’t make it? While a weekend of camping and cultural arts immersion is part of the fun of the biannual festival, LEAF Downtown is a free weekend of music that takes place August 7 and 8, bringing arts and music to Pack Square Park in downtown Asheville. theleaf.org 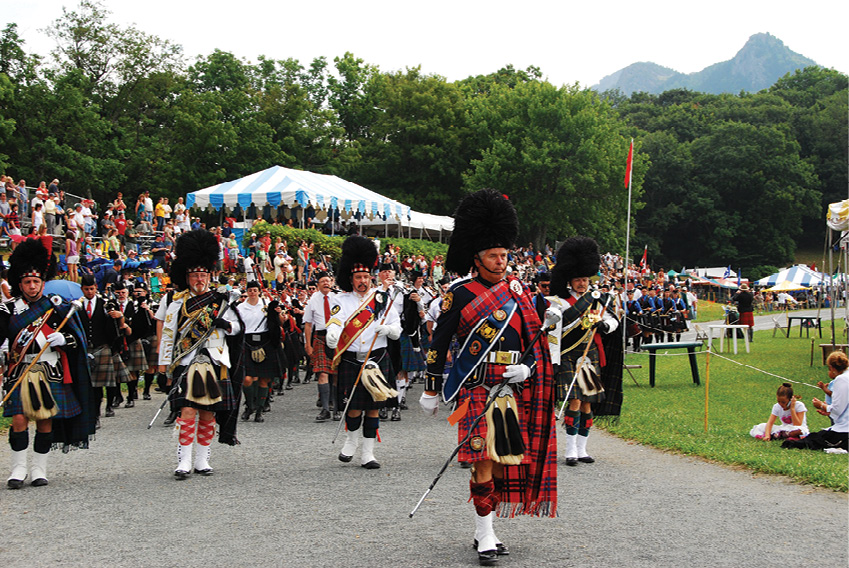 What began in eleventh century Scotland as contests of strength for identifying the most able soldiers is still carried out today around the world in celebrations of Scottish heritage. Since Western North Carolina saw an influx of Scots-Irish immigrants shortly after the Civil War, it’s no surprise one such gathering occurs here annually at Grandfather Mountain. For these festivities, bagpipes, kilts, and maybe a pinch of whiskey go along with traditional games like the caber toss and tug of war, Scottish folk dancing and music, sheep herding and border collie demos, children’s activities (including a Highland wrestling clinic), and a parade of tartans. gmhg.org

Paying homage to the largest ethnic group of pioneers to settle in the region around the turn of the nineteenth century, this festival offers a sampling of everything Scots-Irish. Authentic Scottish and Celtic food, music and dance, traditional dress, crafters, border collie demonstrations, a children’s Highland games (which typically involve feats of strength), and a parade of clans and tartans round out the weekend. While in town, don’t miss a look around the Scottish Tartans Museum. The only one of its kind in the country, the museum presents exhibits about the history of Scottish plaids and dress and the Scots-Irish story of settling here amid the Cherokee. tasteofscotlandfestival.org 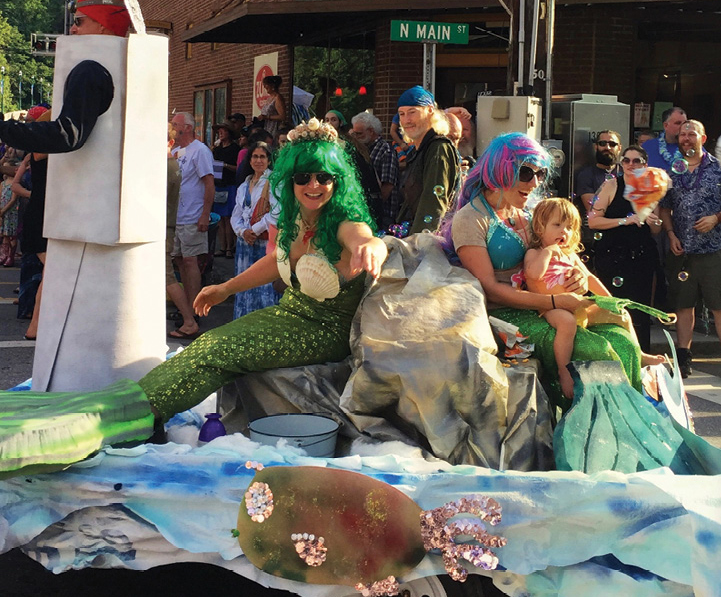 As Asheville has swelled and housing prices soared, the slogan about keeping Asheville weird feels further from reality. But this eccentric spirit still shines bright in nearby places, including Marshall, which holds this quirky annual celebration that’s all about the mystical aquatic creatures that have captivated imaginations for thousands of years. The day includes a “splash island” for the kids, arts and crafts vendors, a treasure hunt through town (replete with doubloons), a public-judged seafood cook-off, live music throughout the day, and, the highlight, the Mermaid Parade. This year’s procession will see plenty of water guns, so expect to get wet. Anyone can join in the parade, but regardless of your level of participation, mermaid costumes are just shy of required for this day of ridiculous fun. downtownmarshallnc.com

North Carolina is one of the top Christmas tree producing states in the country, with one of the highest concentrations of tree farms dotting the scenic rural hills throughout Ashe County. So in the off-season, when farmers aren’t packaging and shipping their product far and wide or hosting visitors for the choose-and-cut experience, they come together every summer for a spirited street festival—with a patriotic flair—in the adorable town of West Jefferson. Attendees can vote for the best specimen in the Christmas tree contest, snap pics with Santa and the missus, shop the wares of dozens of crafters, and dance to the sounds of performing bands throughout the day. christmasinjuly.info 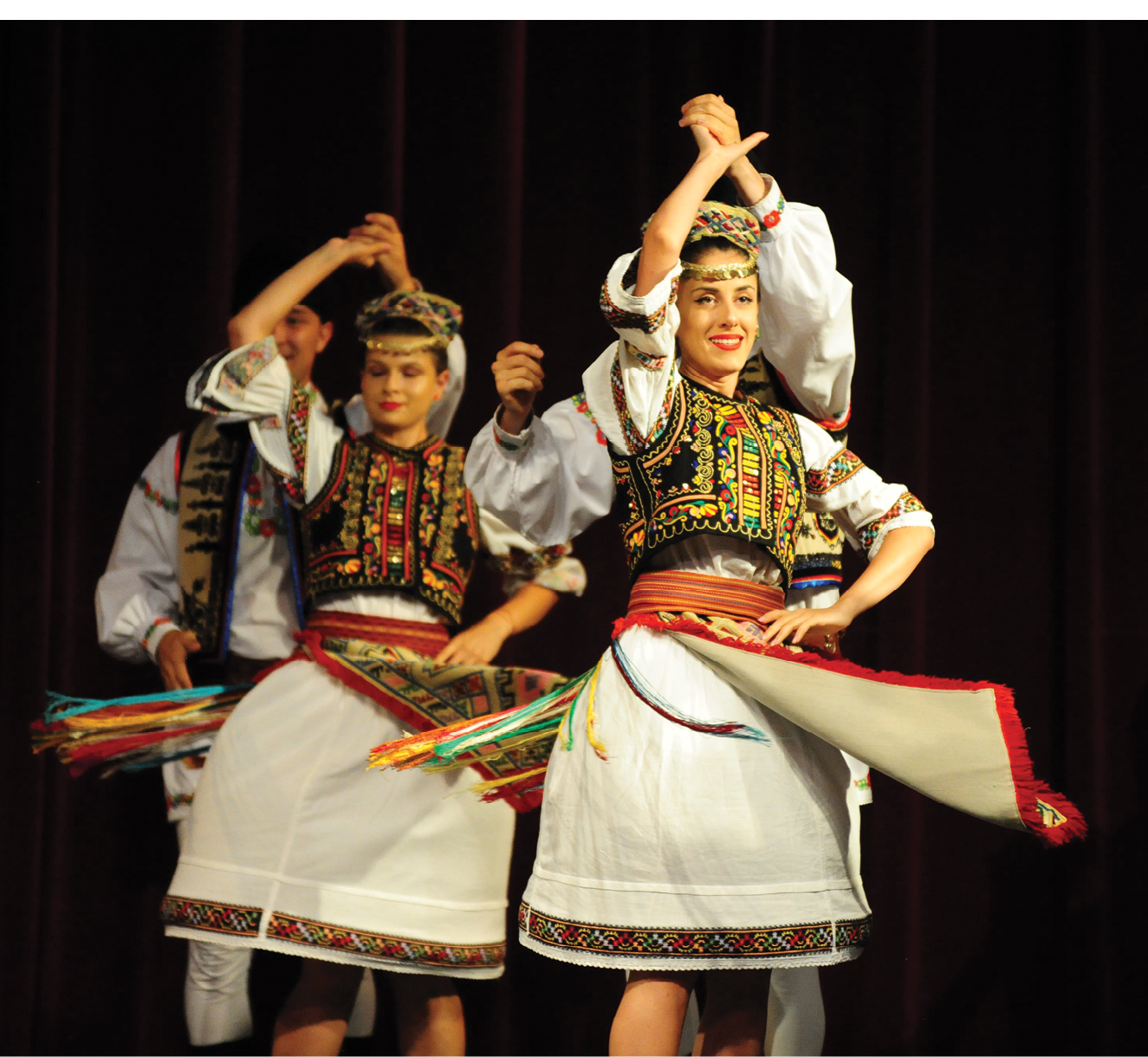 Along with showcasing Cherokee and Appalachian folkways, this annual two-week festival brings the traditional music, dance, and colorful fanfare of nations from around the globe to multiple venues across Haywood County. Each year, some 200 delegates from various countries travel to WNC to perform and share in an exchange of cultures. Perhaps nowhere else would you be able to witness a Bahamian Junkanoo, an elaborate costumed street parade of African origin, followed by showcases of authentic folk songs, dances, and dress from far-flung countries like Romania, Hungary, Colombia, and Egypt—all were on the bill last year, with 2020 performers still in the works as of press time. folkmoot.org

A plethora of apple treats and an array of fresh-picked heirloom fruits take front and center at this annual Labor Day Weekend affair, which rightfully takes place in North Carolina’s largest apple-producing county. The street fair also includes arts and crafts, food, and live entertainment at the Historic Courthouse. ncapplefestival.org 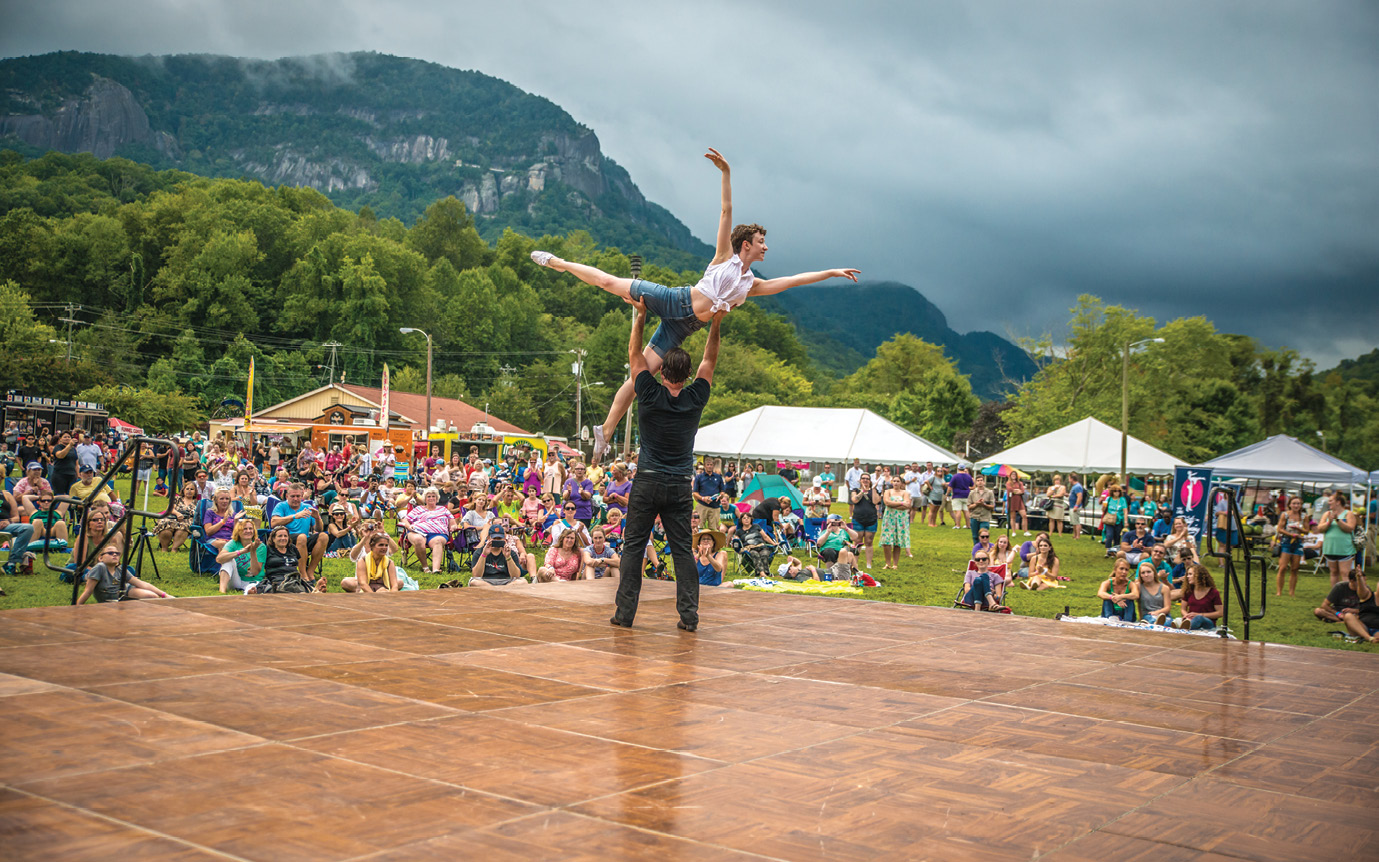 The 1987 hit movie Dirty Dancing may have been set in New York’s Catskills, but it was filmed in southwest Virginia and right here in WNC. Every year, the town of Lake Lure commemorates its limelight moment with a celebration that will have you swaying, shimmying, and sashaying to the movie soundtrack. The weekend includes plenty of dance performances and lessons, a lakeside film screening, watermelon races, and a lake lift competition, among other thematic festivities. dirtydancingfestival.com 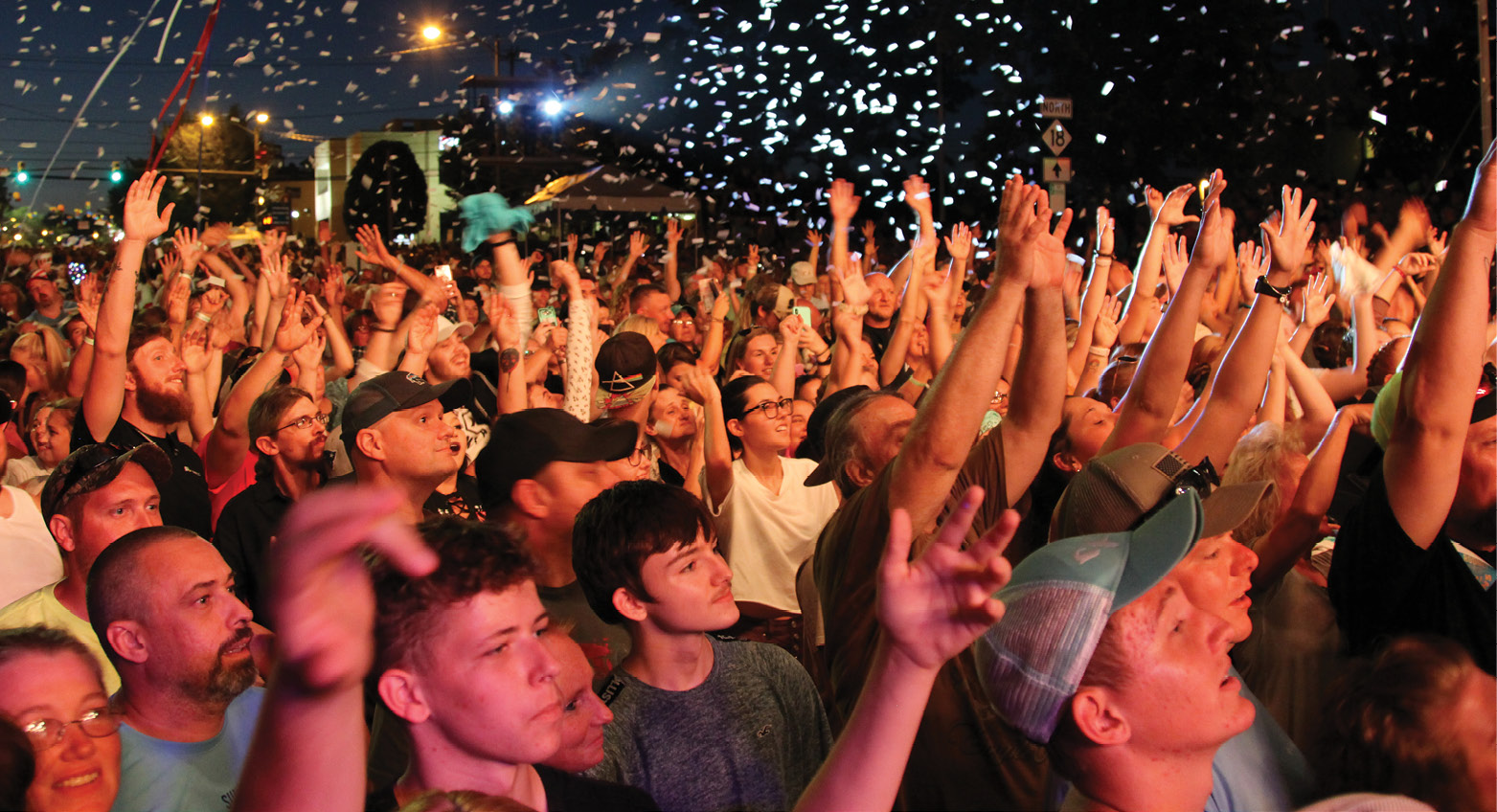 A mile and a half of 250-plus arts and crafts vendors is one of the draws for this festival that takes place in Morganton’s historic downtown and Town Square. Free concerts, including a nationally renowned country music headliner on Saturday night, games and rides for kids and teens, a greenway sunrise run, a beer garden, and plenty of food vendors, heighten the celebration. And the annual M.A.D.E. (Morganton, Arts, Design, and Engineering) Competition challenges middle and high school students to complete engineering projects on-site that demonstrate innovative technology skills. morgantonfest.org

In order to understand this festival, you need to know a bit about the history of Valdese. The town was founded in 1893 by a group of 29 Waldensians, the people and descendants of an ascetic movement within Christianity that dates back to the twelfth century in modern-day France and Italy. Story goes, the people were persecuted and exiled to Switzerland, and were not allowed to return home until 500 years later. To mark the anniversary of what is called the “Glorious Return” from exile, Waldensians around the world commemorate the occasion. In our corner of the woods, Valdese celebrates with a street festival, complete with amusement rides, a cruise-in of classic and antique cars, beer, wine, and food, arts, and crafts, live entertainment, bocce tournaments, a footrace, and more. Though if you want to get to the heart of this little-known ethnic minority, make a point to check out the Waldensian Heritage Museum and the Trail of Faith outdoor museum, or attend the historic outdoor drama From this Day Forward, all of which tell the story of the Waldensians’ history and culture. townofvaldese.com 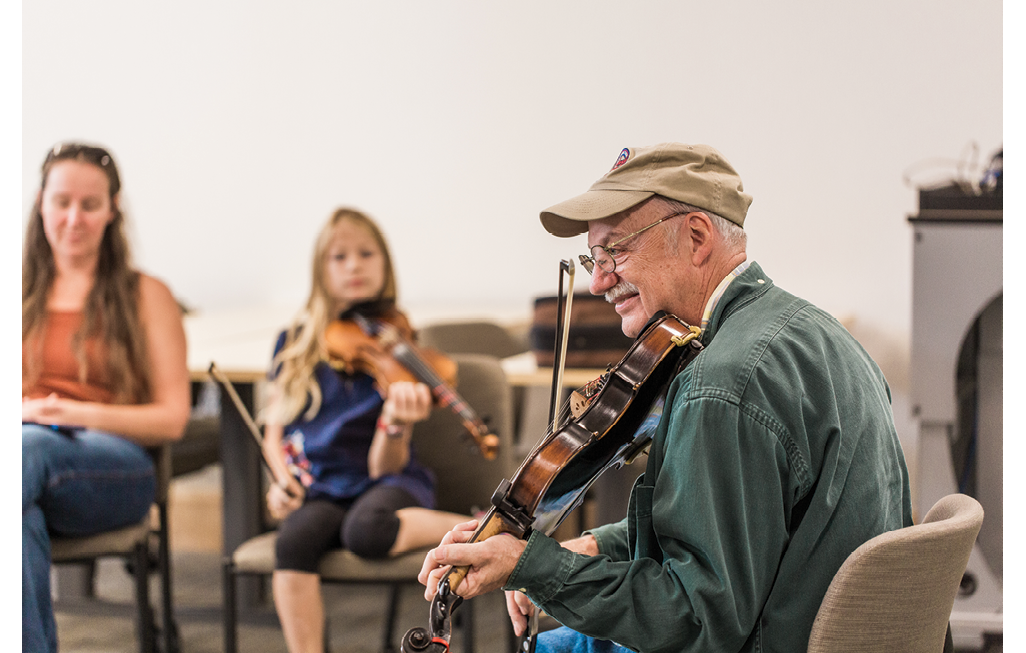 The music and dance traditions of Southern Appalachia—reflecting centuries of Scottish, Irish, English, Cherokee, and African heritage—are front and center at Western North Carolina’s second oldest folk festival, devoted to Bascom Lamar Lunsford, a musician and folklorist who spent his life collecting and promoting the music of the region. The day, which is presented by Mars Hill University’s Ramsey Center for Appalachian Studies and coincides with the Madison Heritage Arts Festival, showcases some of the area’s best musicians on fiddle, banjo, bass, guitar, and dulcimer as well as clogging demonstrations and square and circle dances. A ballad swap is a chance to hear generations-old narratives relayed in song by esteemed and award-winning ballad singers. And a shape-note singing workshop is an opportunity to witness a 120-year-old, seldom practiced form of musical notation singing that has persisted in the rural South. mhu.edu

Can’t make it? The Mountain Dance & Folk Festival, held in Asheville August 6-8, is a similar musical showcase Lunsford helped start in 1928, which still serves to highlight the cultural significance of Southern Appalachian music and traditions.
folkheritage.org

In its 24th year, this festival celebrating fall and all things pumpkin is widely noted for the Pumpkin Roll, in which participants of all ages go for distance, propelling nearly 700 gourds down Frog Town Hill. There are two kids’ zones with inflatables and activities, a pie eating contest, a costume contest and parade, and more than 80 arts and crafts vendors. townoffranklinnc.com 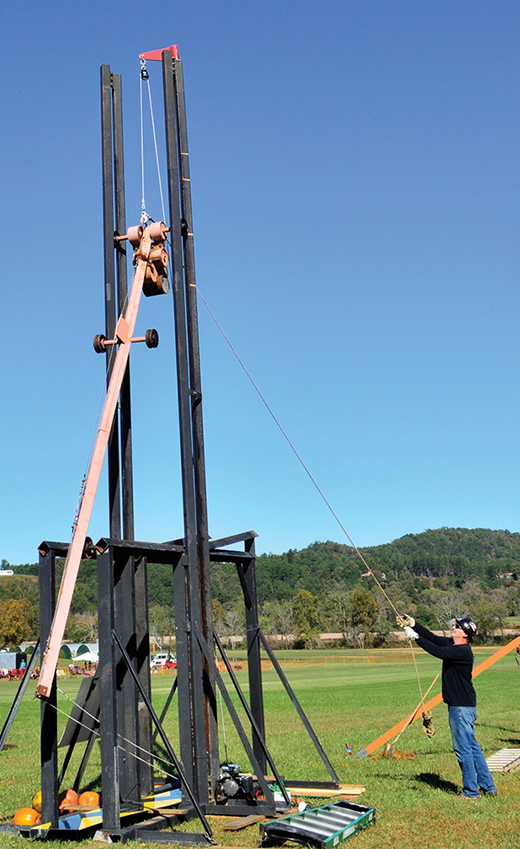 Believe it or not, the sport of hurling pumpkins by mechanical means is a big draw for this event in Clay and Cherokee counties. It’s one of only two dozen such events in the country and pulls around 20,000 spectators each year. So what’s the attraction? The opportunity to witness multiple teams with giant hand-built catapults, trebuchets, and air cannons blast gourds hundreds or even thousands of feet (up to a mile or more) for a win. Arts, crafts, food vendors, beer and wine, kids activities, and a pumpkin cook-off and pie eating contest keep the revelry going. claychambernc.com