Awe, Shucks!: ’Tis the season to seek out the rare and highly coveted green gill oyster 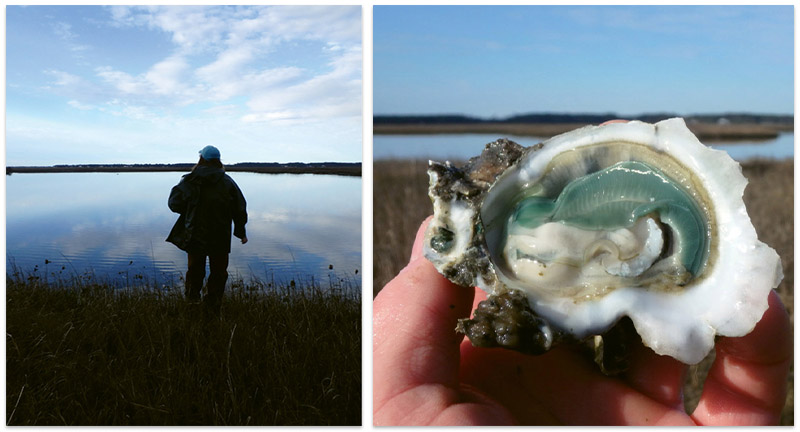 North Carolina’s coast is one of the few places in the world where green gill oysters can be found.

Move over Prince Edward Island; the North Carolina coast is climbing the ranks for its prized oysters—specifically, the unusual green gill variety. Recognizable by its striking blue-green gills (the result of a special type of algae), the oyster has been celebrated for centuries in France, where it grows naturally in the Marennes-Oléron region. North Carolina’s estuary system just happens to be one of the only other places in the world where the conditions are right for producing these mollusks, which also go by names like Atlantic Emerald, Divine Pine, or Wild Greens. Wondering why you’ve never heard of them? That’s because until several years ago, the green gills have been a tough sell in the States.

“It was an unknowledgeable prejudice,” says champion oyster shucker Tres Hundertmark. “It doesn’t look like any other oyster out there. So if it doesn’t look right, then it must be wrong has been the mentality.” Hundertmark was the founding chef of The Lobster Trap in Asheville and, after moving east, now oversees operations for N.C. Oyster 365, a broker supplying distributors and restaurants across the country. The company is one of the only suppliers of the highly valued and hard-to-get green gills, and thanks to Hundertmark’s history in Asheville, the delicacies can be had at The Lobster Trap (starting in late November), but only while supplies last.

So why all the hype? Their rarity is one factor, but so is the taste. “Eating these oysters is like taking a sip of delicious champagne,” says Lobster Trap Executive Chef Mike McCarty. “Their flavor is very unexpected for that of a North Carolina oyster: salt at the front followed by a sweetness and truffle flavor on the finish—very clean and crisp.”

Look out for green gill oysters at The Lobster Trap in Asheville (thelobstertrap.biz) starting in late November. They don’t last long though. And visit ncoyster365.com to find out about a TBA pop-up tasting in Asheville hosted by Hundertmark.