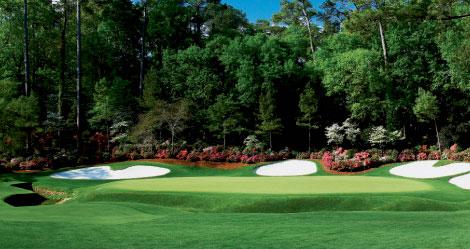 We grew up with the world stopping in Augusta the week of Masters. The whole week was nothing but cocktail parties and brunches,” Lucy Shuler says to me, recounting her childhood in this Georgia city along the Savannah River.
We’re sitting among friends at our own leisurely brunch.

It’s not Masters week, the first full week in April when hundreds of thousands of golf fans descend on Augusta for the Masters Tournament. But there’s still a steady stream of people in and out of the eatery tucked next to the city’s historic Summerville neighborhood. Outside, an elderly couple walks by, still in their Sunday church clothes. Inside, local mosaic artist Paul Pearman is mixing drinks at the Bloody Mary bar, talking about how much of his time surprisingly is now spent on handmade belt buckles with a growing customer base of celebrities like Keith Richards.

Over mimosas and omelets on the sun-drenched porch of Crum’s on Central, Shuler and I are talking golf. Rather, we’re talking the social side of golf, both things that ratchet up springtime in Augusta, the only city to routinely host one of the four men’s golf majors each year. I asked her to stop by, because if anyone is qualified to give the lowdown of Augusta’s Masters parties it would be her.

Shuler, a descendent of the city’s first mayor, spent much of her life here, except while going to school in Columbia. Her grandparents attended the first Masters Tournament in 1934, mostly out of civic duty. A few years earlier, Clifford Roberts and acclaimed golfer Bobby Jones had purchased 365 acres of nurseries land for the Augusta National Golf Club, now the azalea-laden, world-renowned golf club known as one of the most exclusive in the world.

Like many Augusta families, Shuler’s would host out-of-town friends and families, staging backyard parties and dinners when they weren’t on the course watching the tournament. The atmosphere makes the medium-sized city come alive every April, but it’s largely fueled by visiting companies’ hospitality tents and catered parties.

Her foodie-friendly Simply Kitchen store at nearby Surrey Center is just one of many boutique-style stores in the center that attracts the secondary Masters crowd—namely golfers' wives and au pairs. Sweet children’s items and gifts fill the shelves of Charleston Street, a distinctly Southern shopping spot, while upscale clothing items tempt from the windows of Soho, Susan’s, and Village apparel shops. The plaza also serves as a main hub of after-hours activity during Masters week because of its proximity to Augusta National and its mix of bars and live entertainment venues, as well as fine dining restaurants.

On this day, my companion and I head to Surrey for an early dinner at the French Market Grille—one, because too many years have gone by since I last sampled their towering peanut butter pie, and two, because it’s a prime destination for any Masters crowd. Chuck Baldwin, a golf fanatic himself with three holes-in-one on record, opened the casual, Louisiana-cuisine restaurant with his wife in 1984.

As I am eyeing the crawfish rémoulade and blackened grouper that has arrived at a nearby table, head chef Scott Guyer tells me about the seafood bounty that rolls into his establishment for April. At least 2,000 lbs. of shrimp. More than a hundred cases of oysters. An eighteen-wheel trailer truck full of food arrives daily during Masters week to feed the golf-shirt-and-khakis crowd, says Guyer. And every day, the truck is emptied and refilled for the next round of patrons.

It hasn’t been so long since I lived in Augusta, and recollections of the town when it is at its early-April peak seem not-so-distant memories: sidewalks brimming with foot-weary yet ebullient multitudes donning khakis, Polo wind-breakers, and Masters-logo caps. Restaurants accommodate the crowds by setting up beer coolers and oyster bars in their parking lots. Churches and schools sell parking spaces by Jackson bills.

It goes without saying, Par-3 Night—which is to say the Wednesday after the Masters Tournament’s Par-3 contest has ended, just before the official tournament starts the next morning—tends to get the most rowdy. People often migrate to Surrey Center for tailgating, socializing in and around the crowded restaurants, or catching one of the soulful R&B bands known to grace the stage at Surrey Tavern, whose Masters week celebrations frequently spill out into the surrounding shopping center.

Washington Road—which exits off Interstate 20, is home to the National golf course, and serves as the cluttered, chain-restaurant laden commercial strip that runs through the town—proves another popular spot, despite drawing many a snarky comment from writers covering the tournament. A heavily congested thoroughfare, Washington Road is a stark contrast to the pristine and genteel grounds inside the course’s gates. Yet this is where action pulsates as fans pour into the restaurants and bars, bustling and conveniently located.

The strip, however, is fiercely avoided by veterans who know to forego the neon chaos for less-obvious shops in Augusta’s downtown district or around Summerville, the city’s historic corner that hugs the Surrey Center, along with eateries on and around Walton Way, an oak-tree lined, antebellum-home laden corridor. On downtown’s Broad Street, Still Water Tap Room serves mostly locals seeking to avoid the crush of out-of-towners. Old photos of Augusta from the turn of the century hang on its walls; a young man stares somberly out from a vintage version of downtown, mid-calf in water from a massive flood in 1908. In drier and happier times, people now fill the beer pub. I have a pint while talking with Katie Ashley, who has lived in Augusta most of her life, and I ask her where she usually ends up Masters week.

“Locals try to avoid all the congestion,” she says. “I think downtown is one of the most underrated areas of the city, and I think all the Masters visitors are missing out.”

Downtown features an Artists Row, a collection of galleries and unique boutiques housed in early nineteenth-century storefronts along Broad Street. The wide thoroughfare (for which it earned its name) served as a stage to a young James Brown who often performed for soldiers in exchange for pocket change. The 900 block of Broad is also home to the Augusta Common, an open greenspace with plenty of benches for lounging and grassy area for children to play. The Augusta Museum of History, the Savannah River Riverwalk, the National Science Center’s Fort Discovery museum, and the Morris Museum of Art all are within downtown’s walkable boundaries for those who prefer history and culture to egg salad sandwiches and fairway views.

But more frequently, the real attractions during Masters week are the off-the-beaten-path retail spots, places like Bonaventure Discount Golf store, a 10,000-square-foot warehouse located on a frontage road by the Bobby Jones Expressway (named after the golfer who helped found and make successful the Masters Tournament). Stacks upon stacks of women’s golf shoes extend toward the ceiling, and a thirty-foot-long line of golf bags extends into the distance, making the spot a frequent pilgrimage for those in search of bargain golf gear.

Midway through our trip, we decide to venture across the Savannah River, over a bridge that separates Augusta from South Carolina. I’m curious about a relatively new development that has sprouted up on the other side of the river’s banks. It’s one of those neo-traditional neighborhoods with homes reminiscent of old Charleston, townhouses above retail space and sidewalks close enough to encourage neighbors to talk to each other from their porches.

On one of the rooftops in Hammond’s Ferry, we enjoy an overhead, late-afternoon view of a three-acre organic farm owned by the community, and in the opposite direction the buildings of downtown Augusta line the horizon, just above the rocky shoreline of the river. The neighborhood is still quiet and growing as homeowners move in, but Manuel Verney-Carron says his café (Manuel’s Bread Café, its counters filled with fresh-baked breads and mammoth cupcakes, not to mention plates of mussels steamed in white wine and shallots emerging from the kitchen) has already become a central gathering spot for the neighborhood.

Verney-Carron has a longtime history with Masters crowds as general manager and chef at an upscale restaurant in Augusta called LaMaison on Telfair. The native of France said he was attracted to the neighborhood-bistro idea because it reminded him of European town centers. Though across state lines, Manuel’s Bread Café is only about five miles from Augusta National.
He says the homes of Hammond’s Ferry are expected to rent out en masse to out-of-town golf visitors, and, in addition to the restaurant, he expects to be busy with catering orders throughout the week. Many of the people who come into town, the golf patrons who throw lavish parties where he cooks up a custom menu of international fare, return year after year.

Though we almost always stay with friends, there are countless hotel rooms available around the city and, depending on the size of your party, homes to be rented out. One of the hottest reservations in town is a room at the Partridge Inn, with its pale stucco exterior, nineteenth-century décor, and stellar service that has been lauded as the epitome of Southern hospitality. This historic 1892 hotel sits in the heart of the Summerville neighborhood atop a large hill overlooking the city and boasts 145 guest suites, as well as a grand dining room that offers up three meals a day, Sunday brunch, and a bar and lounge for the after-hours crowd.

Indeed, as our trip comes to a close, we find ourselves looking toward Masters week. For with seemingly endless cocktail parties to enjoy and brunches to linger over, not to mention azalea bushes in bloom and three-putts to lament, it goes without saying Augusta is at its peak in spring but at its finest in
early April.

Simply Kitchen has enough shelves of gadgets, Le Creuset cookware, and spices to function as a grown-up toy store for cooks. 463 Highland Ave., (706) 667-6266