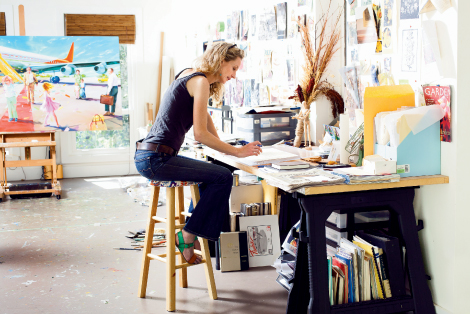 When internationally  known artist James Esber conceived of his controversial and acclaimed “You, Me and Everyone Else” exhibit shown in Brooklyn, New York, in 2010, in which he invited 100 friends to trace their own riff on his infamous 2005 Osama bin Laden drawing, he didn’t exactly imagine the “everyone else” would extend to folks in Tryon. Nor did he know much, if anything, about the tiny town. But he knew about Margaret Curtis.

“I am a big admirer of Margaret’s work,” says Esber, who first encountered her paintings at P.P.O.W. gallery in Brooklyn in the late 1990s. “I knew her work before I knew her. At the time, she was doing these very animated, almost cartoony paintings of big tractors and things. I responded to her luscious paint handling, but also to the distortion and exaggeratedness of it—so smart and sophisticated, yet wacky and offbeat at the same time.”

Curtis spent most of her childhood in Chattanooga, Tennessee, and lived and worked in New York for 16 years before moving to rural Virginia and then to Tryon in 2009.

She brings a big city perspective to her work as a painter and an arts proponent,  and believed Esber’s project would be provocative and engaging for Polk County. So Curtis convinced her fellow board members at Upstairs Artspace, where she chairs the exhibition committee, to host an iteration of the collaborative drawing project. Twenty-some people signed on to participate, including artists from Asheville and Saluda. The show, called “This Is Not A Portrait,” followed the format of the initial experiment. Artists and nonartists alike, including children and Tryon’s mayor, traced the exact lines of Esber’s original bin Laden image, overlaying their own style and interpretation in subtle ways.

“‘This Is Not A Portrait’ was a great project for us. For it to have premiered in New York then come next to Tryon was a big deal,” says Curtis. “I also loved that it was inclusive—participants didn’t have to have artistic ability, just an interest in the project, which was really a conceptual piece about the nature of drawing.” When Curtis hung the parchments, she admits she was moved by the uniqueness of each one. “Even within such limited leeway, we are all really different beings. There’s something very profound about that, especially in the framework of bin Laden, who took nearly 3,000 lives.”

Given the provocative nature of the bin Laden image, Curtis had to fight for the show, but the board ended up unanimously backing her. Though she is but a wisp of a woman—tall, lean, with startling sapphire eyes—Curtis is also gently formidable and disarmingly funny. She’s not afraid to stir the pot, to question, to confront. To Curtis, art is less about beauty than about exploration, revelation, vulnerability, and confrontation; it’s about pushing the envelope, engaging the viewer, which is why she is so at home at Upstairs.

Upstairs Artspace has a long history of challenging its audiences. The fact that it is a nonprofit dedicated to developing an understanding and appreciation of contemporary art is in large part what influenced Curtis and her husband, Harold Maass, a journalist and now board president of the gallery, to move to Tryon. “We were drawn to the Asheville art scene and the Western North Carolina area, and ideally were looking for a small town that had some cultural life to it,” says Curtis. “We just happened upon Tryon, and found it really striking that a town of this size had the population and the interest to support a true contemporary art gallery and an art film house.”

Only later did she learn about Upstairs’ distinguished history dating back to the late 1970s, when it began in the second-floor bedroom of a local artist and showcased more radical, conceptual art, including that of Curtis’s art school mentors and internationally renowned artists such as Jenny Holzer, known for her large-scale projections and illuminated displays. “I find it pretty remarkable that artists of Holzer’s caliber showed here,” Curtis says.

Now ensconced in the community, Curtis, a working artist and mother of two sons, is expounding upon that renegade spirit. In addition to heading up exhibits for Upstairs, she serves on the board of Flood Gallery Fine Art Center in Asheville, where her recent work was featured in a solo exhibit last April. “Margaret is very community-oriented,” says Jolene Mechanic, director of Flood Gallery. “She’s willing to jump in and do whatever needs to be done, like when she helped me with a Black History Month art project at a local school. She voluntarily drove to Asheville every week for six weeks. She’s a tremendous asset to the local art community. The beautiful thing about Margaret is her willingness to push the envelope.”

The benefits go both ways. Being part of a broader community of artists feeds Curtis’s own creative wellspring, and was something she lacked living in Virginia. It was a creative dry period when she did not paint at all. “Making art can be an isolating activity. You’ve got to allow ideas to bounce around, to give form to what’s going on in your mind. It’s lonely, engrossing, and it’s easy to feel like a fish out of water,” she says. “I think one of the big reasons I started painting again in Tryon is that art is respected and taken seriously here.”

Curtis’s work has been shown in galleries and museums across the country, including the Nexus Contemporary Art Gallery (now dubbed the Atlanta Contemporary Art Center), Newhouse Center for Contemporary Art on Staten Island, Zolla/Lieberman Gallery in Chicago, and the Brooklyn Museum of Art. Her more recent work may be less in your face, but still edgy, still provocative. Her paintings reflect a fresh use of cheerful color and pleasing composition, a bright and inviting aesthetic quality that disguises a more jarring narrative and cultural commentary. Gender issues, power imbalances, family dynamics, childhood fictions, the raw ache of being human, and  the endlessly intriguing life of the mind are her material. “I like to say Margaret’s work is like eating cotton candy off a spike,” says Mechanic. “On the surface, it’s so aesthetically pleasing that viewers are drawn to it, then wham, she hits you unexpectedly.”

As she prepares for an upcoming solo exhibit opening in January at the McMaster Gallery at University of South Carolina in Columbia, Curtis feels her inspiration emanating less from personal memory and more from the world around her. “I’m making peace with my demons and see myself as hopelessly implicated in so many of the aspects of this culture that are not ideal,” she says. “I don’t feel so confrontational anymore, because I’m old enough to know I don’t have any answers. But I do want to make images that have pathos and humor about this terrible mess of a world we inhabit. I want to make images that are hard to forget.”

Meanwhile, back at Upstairs, Curtis is helping fill a calendar of arts offerings that will be memorable for her neighbors and visitors. She’s particularly looking forward to a show of conceptual art curated by Connie Bostic, which will feature diverse art forms including light projections and sound installations. Another envelope to push. Another show, and more minds to open.

*Corrected Sept. 9, 2013: The original article listed the incorrect venue for Curtis's upcoming solo exhibit. We apologize for the error.