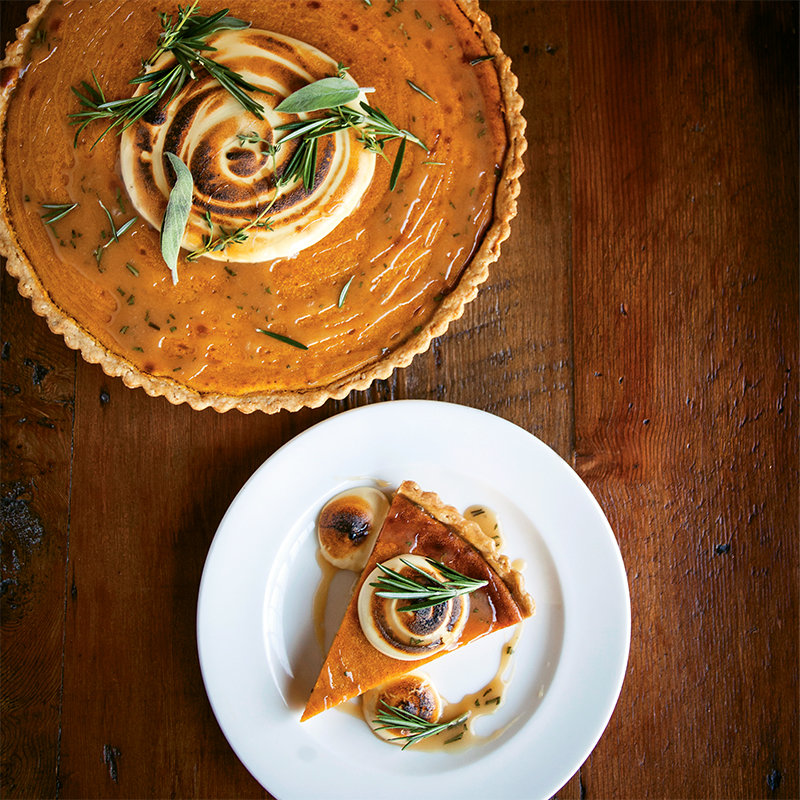 From the Kitchen of: John Fleer, The Rhu, Asheville

Preheat oven to 325°F. Combine flours, salt, and butter in a mixer with paddle attachment. Mix until butter breaks down into pea-sized pieces. Add water and mix just until it comes together. Remove and lightly knead on a work surface. Wrap in plastic and refrigerate to chill. Remove a few minutes before rolling out. Roll out dough and place in pie shell. Chill shell again in refrigerator. To par-bake the shell, place a square of parchment paper that’s just larger than the shell in the center and fill with dried beans or pie weights. Fill about a quarter full to prevent crust from puffing up. Bake for 15 to 20 minutes. Pie shell should be completely cooked, but not fully brown. Allow to cool completely. See Roasted Sweet Potato Chess Pie for assembly instructions.

For the the Pie Filling

Preheat oven to 325°F. Using a blender, add one and half cups sweet potato purée, brown sugar, cornstarch, milk powder, salt, nutmeg, cinnamon, vinegar, cream, and egg yolks. Blend until smooth and well incorporated. Slowly stir butter into mixture. Pour into par-baked pie shell. Bake for 20 to 30 minutes until set, but not puffed or browned. It should have a gelatinous jiggle.

To make Rosemary Honey Glaze, melt butter in a medium pot. Add brown sugar and honey, stirring until they begin to dissolve. Add remaining ingredients, stir, and bring to a low boil. Cook for five minutes and reserve.

To finish the pie, brush rosemary honey glaze onto baked pie while warm and top with sorghum marshmallow fluff.