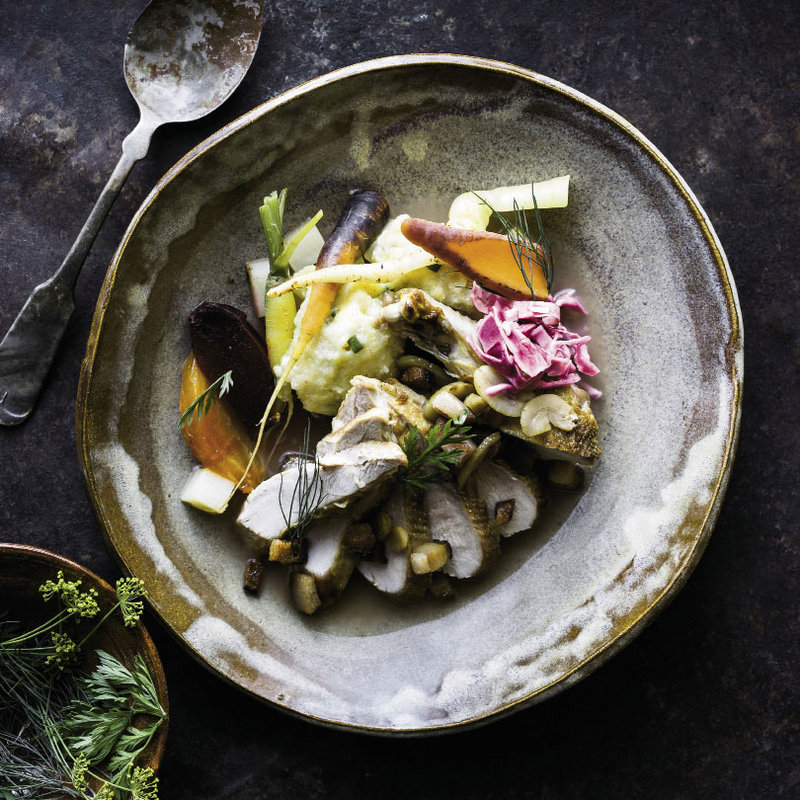 For broth, cut pheasant into four pieces, leaving legs attached to thighs and wings attached to breasts, but remove breasts from the bone and reserve carcass. Heat oven to 350°F and roast carcass for 45 minutes, until it turns golden brown. In a large stockpot, add carcass, yellow onion, one carrot, bay leaves, thyme, and water. Bring to a boil, reduce heat to low simmer, and cook for two hours, periodically skimming fat and impurities from the surface. Strain and reserve broth. Discard ingredients.   In a bowl, make the batter by mixing all dumpling ingredients together. Set aside.

Heat a large Dutch oven over high heat on stove top. Add bacon and cook halfway, stirring often. Add chestnuts and continue cooking until bacon is crispy. Remove bacon and chestnuts and set aside. Season pheasant pieces liberally with salt and pepper. Cook skin side down in Dutch oven until golden brown, then sear other side. Add one or two tablespoons of vegetable oil if pan begins to dry. When pheasant is brown, remove from pan and set aside.

In the same Dutch oven, add red onion, potatoes, beets, rosemary, and garlic to hot pan. Stir for a few minutes until vegetables begin to cook. Add hard cider and three quarts of pheasant broth (refrigerate the rest) and bring to a simmer. Add pheasant meat and drop spoonfuls of dumpling batter into pot. Cover with lid and cook over low heat for 20 minutes, making sure dumplings are cooked and have risen to the surface. Season with salt and pepper. Serve topped with pickled cabbage.