The Black Mountain Crest Trail is legendary, as it’s the highest trail east of the Mississippi River.

Sure, there are more famous footpaths in our neck of the woods. The Appalachian Trail, the Mountains to Sea Trail, the Art Loeb …all world-class adventures in their own right, and I’m not trying to take anything away from those adventures. They’re wonderful. But the Black Mountain Crest Trail has a certain cachet that I find irresistible because of its contrasting difficulty and beauty.

The BMCT is “only” 11.5 miles, but most of that mileage is spent lingering more than a mile high in elevation, traipsing along some of the tallest peaks east of the Mississippi before finishing just shy of the summit of the crowning jewel, 6,684-foot Mount Mitchell. There’s a subculture of hikers who are obsessed with summiting all 40 of North Carolina’s 6,000-foot peaks. If you attempt the whole Black Mountain Crest Trail, you’ll have the chance to bag six of them on a single hike (seven if you count Mt. Mitchell). No other trail can match that kind of bang for your buck when it comes to peak bagging. You’ll have to earn that glory, though.

The Black Mountain Crest Trail starts with a 3,000-foot climb in the first four miles as you ascend a rocky logging road that rises along the side of Bowlens Creek to the edge of Celo Knob, the first 6,000-footer of the trek. A lot of hikers assume that initial climb is the toughest part of the trail, but they’re wrong. That first, relentless push is just the warm-up. The next 8 miles is the real challenge, as you yo-yo along the spine of the ridge, climbing one 6,000-footer after another. To call this trail a “hike” is deceiving because there are pronounced sections of steep rock scrambling, some of which require hand over hand climbing while others require the use of fixed ropes. Calling it a “mountain climb” would be more appropriate. The trail is so hard, it’s lovingly referred to as the “Death March” by some in-the-know hikers. But don’t let that turn you off. You’re on top of the world here, with views to prove it. Both ends of the Black Mountain Crest Trail are punctuated with long-range views to the east and west, while the middle of the trail traverses high-elevation ecosystems rarely found in other parts of the Southern Appalachians, from grassy balds to dank, fern-laden spruce forests. It is a romp unlike any other in the state, and if you complete it all, you can finish with a selfie on top of the highest mountain for hundreds of miles in any direction. And you’ll know you earned that selfie the hard way. 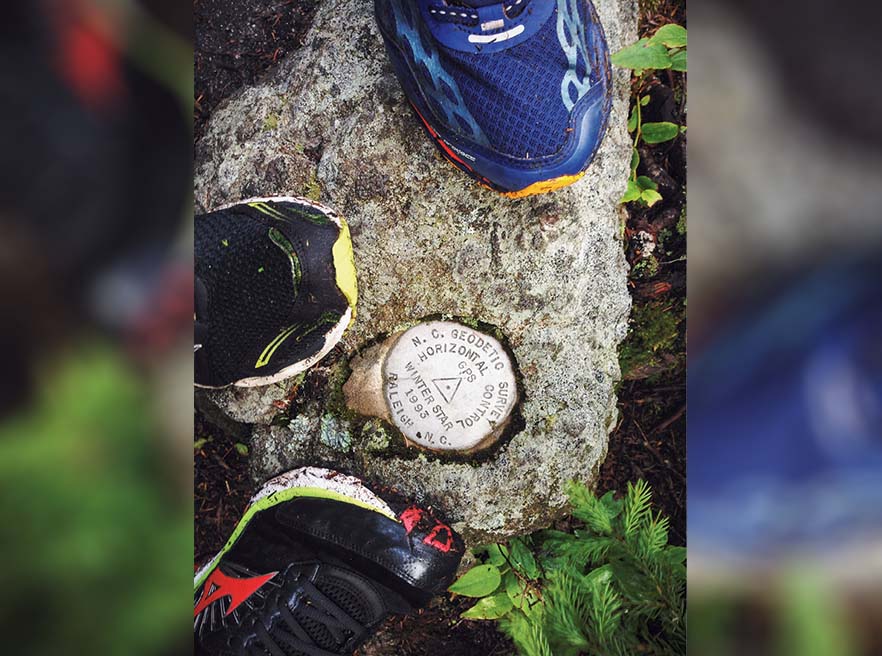 Trail stats: 11.5 miles with 6,500 feet of climbing
Trailheads: Bowlens Creek, outside of Burnsville, and Mount Mitchell Summit Parking Area
Skill Level: Good fitness and a positive attitude are key. BMCT offers some of the toughest and most rewarding hiking in the state.
Logistics: Most hikers break this up into a two- or three-day backpacking trip. You’ll find small campsites at various points along the trail, the best of which is at Deep Gap, 8 miles in if you start from Bowlens Creek. Water is scarce after you reach the ridgeline, so pack accordingly. The Black Mountain Crest is best done as a point to point, starting at Bowlens Creek and finishing at Mount Mitchell. You’ll need to arrange your own shuttle, parking one car at Bowlens and another at the Mitchell Summit Parking Area.