Wild School: For 10 years, Muddy Sneakers has shared the magic of outdoor learning 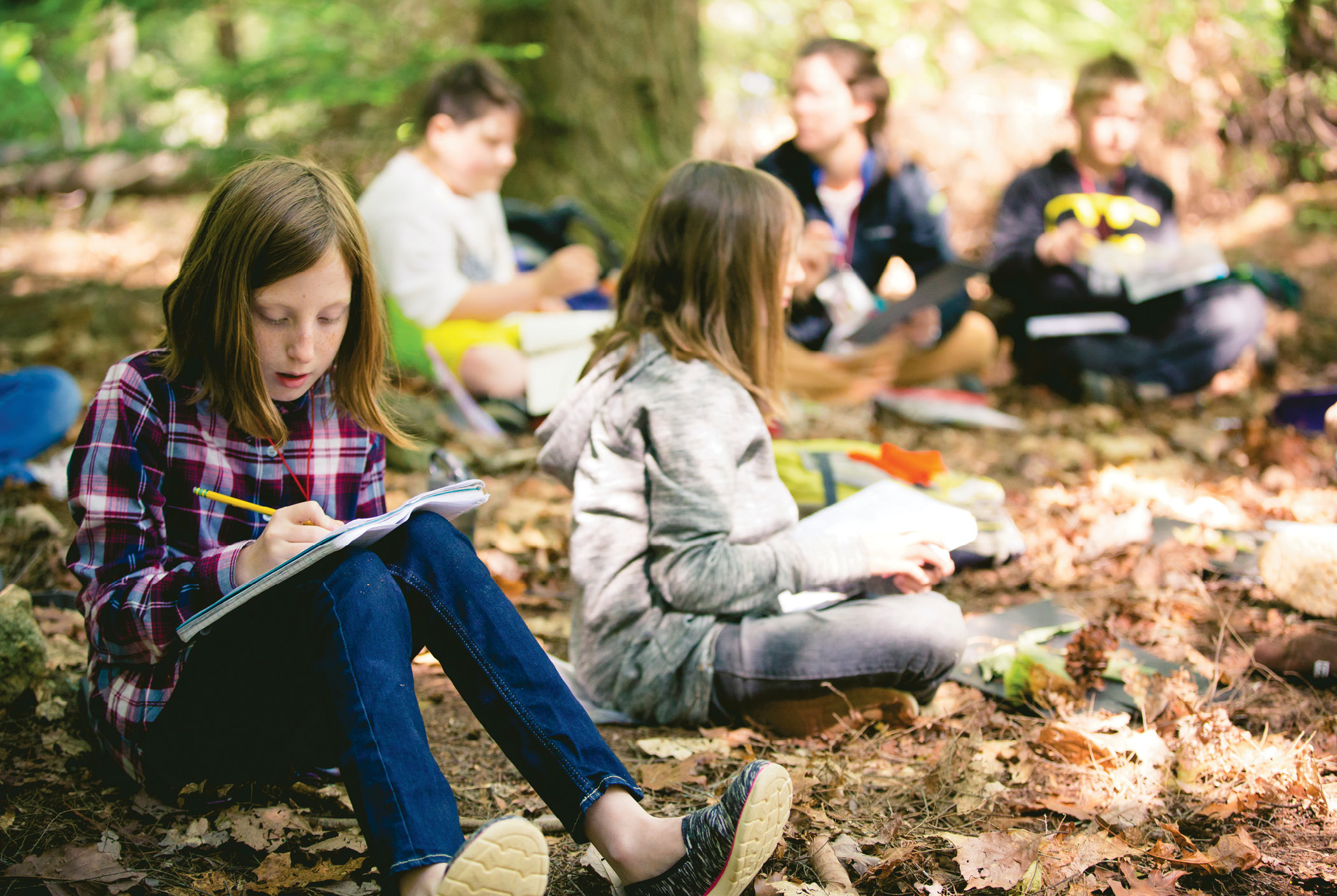 When Muddy Sneakers’ fifth-grade students climb off the bus, they find themselves in a place that is exotic and sometimes a little spooky. For many Transylvania County kids, a science-based learning expedition into Pisgah Forest is a daring adventure.

“There are kids in Transylvania who have Pisgah Forest in their backyard and have never been there,” says Ruby Compton, program director for Brevard-based Muddy Sneakers. The nonprofit, celebrating 10 years this year, takes local students on daylong field trips to acquaint them with the outdoors. During this trip, the kids scream and squirm at the sight of spiders and worms. Others look up at the trees and ask questions like, “Who made all this?”

“The disconnect to nature is clear,” says Compton. “They have all the knowledge in the world,” she says in reference to their laptops and smartphones, “but they lack confidence in the real world.”

A typical day in the woods starts with the students breaking into groups of roughly 10. The instructor reviews wilderness safety and talks about the lessons and excitement that await.

As the students hike, they scour the trail for specimens and explore creek banks. Eventually, the lessons commence and concepts like convection, ecosystems, velocity, and other standard fifth-grade curricula come to life in the wild. The kids also tackle experiential tasks like hanging bear bags, brewing tea from White Pine needles, investigating habitats, testing natural insulators, and racing handmade boats down streams. Later, the instructors allow students to sit and reflect, write creatively, or draw. There are also moments of spontaneity.

“Sometimes the kids just need to play in a stream,” says Compton. “For ecosystems review, we’ll get in the stream and search for critters. We take their interests and weave instruction in.”

Throughout the course of the academic year, Muddy Sneakers takes small groups from 25 Western North Carolina public schools on six of these expeditions to destinations like Pisgah National Forest, Gorges State Park, and DuPont State Recreational Forest, as well as to private lands protected by conservationists. “For the best interest of our children, we have to look beyond the box,” says Muddy Sneakers Executive Director Ryan Olson. “The box may be the classroom, and we are an extension of the classroom.”

Taking on the scientific process in wild places offers not only a boost of self-esteem but also improvements in standardized test results. According to Olson, every school that has partnered with Muddy Sneakers has seen its science test scores rise, and two schools had 100 percent of their fifth graders pass the state assessment.

Encouraged by numerous positive trends, the organization decided to begin tracking its own data. Two years ago, Muddy Sneakers teamed up with North Carolina State University to implement yearly evaluations that it will use to measure environmental literacy. The organization is seeing a number of inspiring trends, including a sharp uptick in the self-efficacy of both female students and those with learning disabilities.

While efficacy, knowledge, independence, and leadership are Muddy Sneakers’ benchmarks, a deep appreciation of place, be it wilderness areas or parks and backyards, is at the root of the organization’s ethos. Dedication to wild places is what first united Muddy Sneakers’ founders Sandy Schenck, Aleen Steinberg, and Chuck McGrady. The trio had joined forces in the mid-1990s to conserve DuPont State Recreational Forest, and in the summer of 2007, they met in Cedar Mountain, where they discussed the magic of childhood in the outdoors.

“The three of us sat down on Sandy’s porch one afternoon,” recalls Steinberg. “We talked about the concept of getting kids in the woods. All of us had such positive reinforcement as children growing up with access to the outdoors. My theory was you could learn from a book, a blackboard, or a teacher, but until you actually live it and until you actually experience it, you don’t know.”

The environmentalists envisioned a program that could work with WNC schools to inspire a love for Southern Appalachia, and the dream blossomed into Muddy Sneakers. Like-minded community members quickly joined the board, and John Huie, former director of the North Carolina Outward Bound School and Environmental Leadership Center at Warren Wilson College, became the organization’s first executive director.

As Muddy Sneakers celebrates its 10th anniversary this year, the organization is growing rapidly. Behind a one-time $500,000 state appropriation, it has launched a new office in Salisbury that currently serves five Piedmont counties. “With state support, which is critical, we were able to get 14 more schools on board—about 1,000 students,” Olson says. “We are going to make our best effort to keep the state invested, and the state is going to look to us to keep the private sector invested.”

The organization has also started a pilot program in three counties in Upstate South Carolina. Approximately 3,000 students from 44 schools across two states are now muddying their sneakers.

For Steinberg, reawakening children to awe and wonder is a mission of dire importance, in the Carolinas and beyond.

“The land drew us and made us who we are,” says Steinberg. “We live in rich biodiversity in Western North Carolina, but God is not making any more of this stuff. Kids need to understand the world around them,” she says. “I hope someday a program like this will be throughout the United States.”