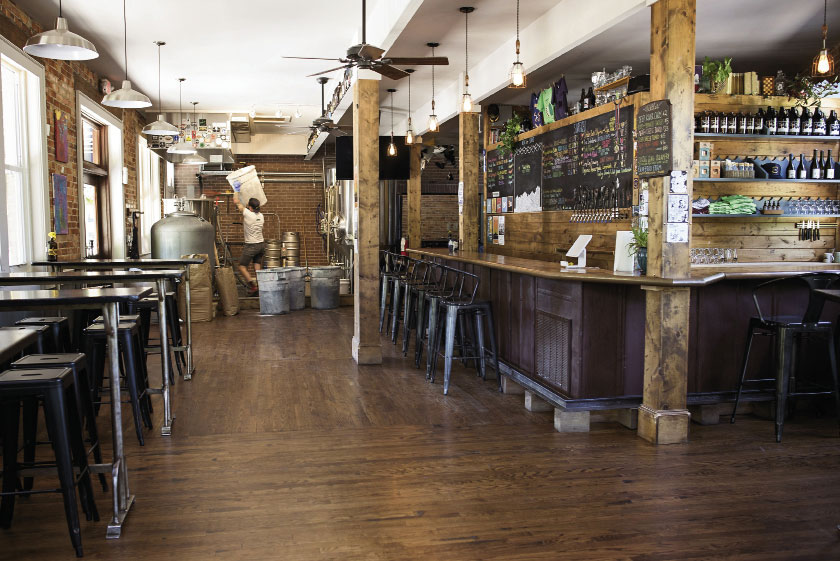 A curious list of ingredients appears on the chalkboard menu at Fonta Flora Brewery: Sassafras leaves, ramps, dandelions, figs, and rose petals add seasonal flavor to IPAs, saisons, and crème ales. The ingredients, which are plucked from the woods surrounding the Morganton brewery, point up a trend among brewers to create hyper-local beers from wild edibles.

“When drinkers try our beer, they are literally getting something they won’t find anywhere else on the planet, because the ingredients we use reflect the region where they were grown,” says Fonta Flora brewmaster Todd Boera. “These are true Appalachian beers.”

While wild edibles have long been popular on restaurant menus, the idea of using foraged ingredients in brewing is just starting to catch on—and several WNC breweries are on the forefront of the trend.

At Burial Beer Company in Asheville, co-owner Jess Reiser has used foraged ingredients in several beers, including The Gras Whip Wit made with dandelions and saisons made with honeysuckle, hibiscus, and wild passionflower. “Our goal is to brew beers using as many locally sourced ingredients as possible, and foraging is about as local as you can get,” Reiser says. “When you can go out and handpick ingredients, it gives you a deeper connection to the craft.”

Other WNC breweries using foraged ingredients include Andrews Brewing Company in Andrews, Nantahala Brewing Company in Bryson City, and Asheville-based Wicked Weed and One World breweries. And New Belgium Brewing, which is slated to open a new facility in Asheville next year, has also created limited-release beers with foraged fare

While these local beers are popular, creating them requires significant effort. Brewers must scout for the seasonal ingredients and harvest sufficient quantities. For instance, it takes five pounds of dandelion flower heads for Fonta Flora to make one batch of dandelion saison. Boera acknowledges the extra work but believes it’s worth it.

“Foraging is a combination of using fun ingredients, getting creative with flavors, and making a truly local beer,” he says.

The ever-changing availability of wild edibles means beer buffs never know what might be on tap. Fonta Flora Brewery has committed to two foraged brews for this fall—so skip the same old IPA and order one of these “wild” beers.

Brutus: This dandelion saison is made from flower heads