The Wheel Life: Riders take to the trails with a single tire and a lot of guts 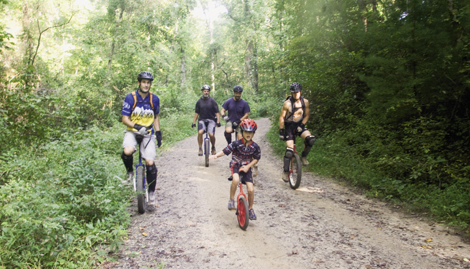 I’m in the groove. It’s a searing afternoon and I’m pedaling along a gem of a trail in Sycamore Cove near the Pisgah Ranger Station in Brevard—one of my favorite sections of single track anywhere. Mountain bikers could crank through this loop in a fraction of the time­—a mere warm-up for them­. But I’m on my unicycle, picking my way down a slope, pausing, hopping, looking for a smooth lane past the tangle of roots and rocks.

Just ahead, a man unenthusiastically corrals his unleashed dog from the trail. I thank him. He nods. I pass. My focus is unshakable, and I’m coasting—no I feel like I’m floating—on a crooked stretch still damp from a cloudburst hours ago. At a particularly dicey section, I pause above a log step and scope my line. I grab my seat handle, take a hop, and resume pedaling.

With no brake, I’m at the mercy of gravity and my knobby tire’s precarious connection to the slick slope. As I descend, my legs are continuously pumping. I keep my balance by extending my right arm, which is slightly bent at the elbow with my hand face down as if palming a basketball, and slalom through obstacles and over small drop-offs carved by erosion. I’ve chosen a good path through the fray. I glide around a switchback and onto level terrain at the bottom. It’s a perfect performance; a “10.” Of course, you’ll have to take my word for it, because there are no witnesses.

Riding a mountain unicycle, or MUni, attracts attention, but not a lot of fellow riders. The reactions can be broken into categories. From my experience, most are largely apathetic—a polite nod or suspicious glance from the corner of an eye. As you would probably guess, there are plenty of smart-aleck remarks like “You lost a wheel!” Every once in a while, I’m heaped with praise as if I’m walking a tightrope or juggling sharp knives. The circus analogy may be justified since you’re likely to find a few clowns riding unicycles under the big top. But MUni riders are as serious as any other cyclists.

Five years ago, I stumbled upon a mention of the sport on the pages of an in-flight magazine. The combination of unicycles and trails appealed to my regard for nonconformity and adventure.

When I finally bought a unicycle, I realized that it may not take long to understand the mechanics and physics of staying upright, but actually doing it isn’t easy. At first, balancing a small patch of wheel on pavement can seem like a desperate act. Experts suggest two to six weeks of regular practice to master the basics. After a couple of months, I found my form.
Since unicycles have a fixed, one-to-one gear ratio (unlike most bicycles, which have multiple gears), their top speeds are slower, and riding is technical. Starting on flat terrain is key. I began by riding parallel to the brick exterior of a neighborhood elementary school, using the wall as a crutch.

My first attempts off-road were pathetic and a little embarrassing. Minor obstructions for a mountain bike become several degrees more challenging on a single wheel. But with practice, I’ve moved on to more advanced skills, such as hopping over obstacles, idling in place, and rolling on logs.

The hardest part of breaking into this sport may be finding someone to ride with. In fact, riding a mountain unicycle may qualify as the loneliest adventure sport. Luckily, I’ve connected with a few other local riders. Bill Spears and Ben Richardson are pioneers of the sport and members of a small cadre of dedicated cyclists in Western North Carolina.

In the late 1980s, Spears replaced the slick tire on his unicycle with a Tioga Farmer John, the must-have mountain bike tire of the day, and struck out on the trails. “People thought I was crazy,” recalls Spears. “No one was doing it.”

Well hardly anyone. The sport probably cropped up in various parts of the globe around that time. Richardson, a transplant from Anchorage, Alaska, learned his way on one wheel more than a decade ago from George Peck, a one-wheeler from Seward, Alaska, who produced the video, Rough Terrain Unicycling, in the ’90s that some say launched the sport. Peck indisputably helped spread the popularity of the fledgling pastime.

Since then, a growing interest in trail riding has led to more versatile unicycles. While the size of a road wheel can vary, most trail riders prefer a 24-inch fat tire, and some ride with a brake. MUni wheels are tougher, and the other components—pedals, seat posts, cranks—are sturdier than those on a road unicycle.

Though what really distinguishes riding a MUni is the focus it requires; the outlandish act of balancing on a single wheel thins out the crowd. And frankly, unless you’re a clown, acrobat, or teenager, a device so peculiar simply lacks mass appeal. Mountain unicycling may be budding, but its popularity is a relative thing, and the sport could wind up being little more than a fad.

Which may be why I often ride solo and why the occasional enthusiastic onlooker is a good thing. It’s not attention I’m after, just some respect and maybe a few friends to ride with.

The Western North Carolina Unicyclists website, www.wncunicycle.webs.com, is a great place to connect with a growing community of riders. There will be workshops and several demonstrations at Lake Eden Arts Festival, October 14-17, in Black Mountain. You can also visit www.ashevillemunifest.webs.com to learn more about an annual off-road festival.

You can purchase a unicycle through websites, such as www.unicycle.com, or ask your local bike shop to place an order. Second Gear at 444 Haywood Road in Asheville often has several in stock.

Once you’re ready for the trail, the gravel roads and moderate single tracks at Bent Creek Recreation Area, adjacent to the N.C. Arboretum, are forgiving places to learn off-road riding.