Home /What Lies Beneath

What Lies Beneath: River snorkeling reveals a vibrant underwater ecosystem 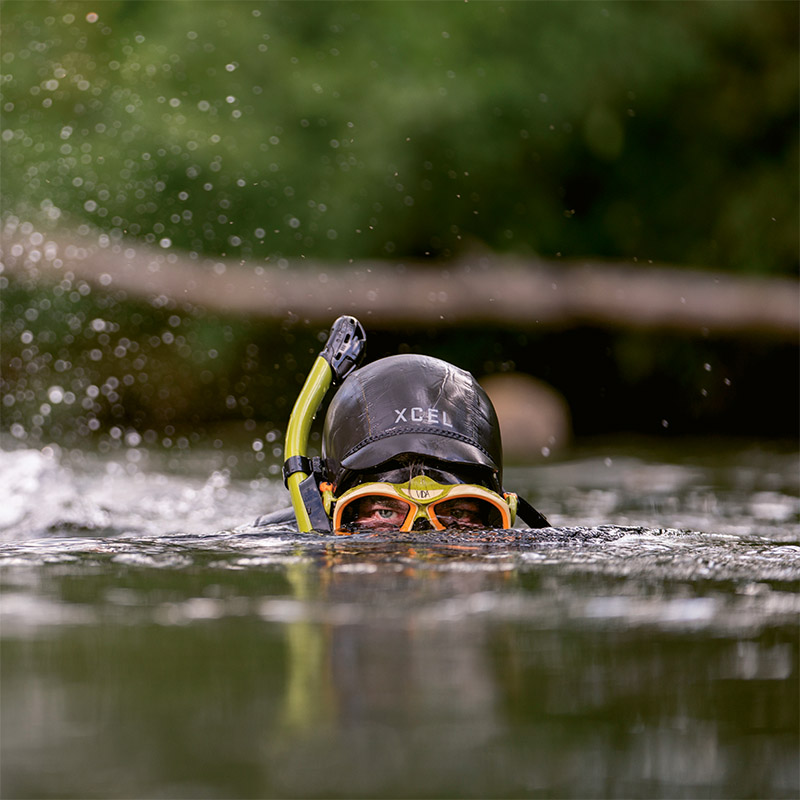 “I love to introduce people to the freshwater environment. It’s something that scientists have been trying to protect for decades, but it’s a struggle to educate people about it.” —Kevin Merrill

“Hey man! We’re down here,” calls out a twangy Southern voice from under a bridge spanning the French Broad River. Suddenly my guide, Kevin Merrill, emerges, his gray beard hanging to his collarbone, his wet suit peeled to his waist.

“I don’t know anyone who’s ever river snorkeled,” I admit.

“I’m the only one doing this,” he says with a grin.

A mountain man who earned a master’s in biology with a focus in freshwater biology, Merrill is WNC’s only commercial river snorkeling guide, operating half and full-day small-group adventures through his company, Oxbow River Snorkeling, which he owns with his wife, Christie. He possesses an encyclopedic knowledge of the French Broad and has deep roots in the area.

His great-great grandfather trapped furs in these very mountains, and his great-grandfather was a bootlegger in Panthertown Valley, says Merrill, who spent most of his childhood fishing, hunting, and exploring. So in 2005, when he enrolled at Eastern Kentucky University, it was a natural fit that he elected to study freshwater biology for six years before becoming the curatorial assistant at the university’s zoological museum, which houses the largest collection of animals in the state. These days, Merrill teaches high school and college courses, but his weekends are devoted to taking curious visitors out on ecology-oriented excursions. His company’s name, he explains, is inspired by a scientific term: As rivers wind, banks are worn away until they eventually leave calm reservoirs called oxbows, which teem with creation.

Ready to explore Merrill’s underwater realm, I suck my mask tight to my face and sidle into the confluence of the West and North forks, mile zero of the French Broad. Leaves swirl through the column, schools of fish dart in all directions, and strands of green algae dance spastically. The river looks calm, but beneath the surface is a bustling new world. Suddenly, I’m gliding with the brisk pace of the current.

“I got the idea working at the college,” Merrill says. He saw freshwater researchers working alongside snorkelers, who could easily access specimens. “I got the opportunity to do that, and it was the first time I had stuck my head underwater,” he says. “I’d never thought to do that before, and I was amazed by the world I saw down there.”

Merrill’s passion for freshwater is palpable. As we sail through the water, he tells me there are 45 species of fish in the river, pointing out a diverse slew of shiners, darters, stonerollers, redhorses, hognose suckers, bass, bluegill, and trout. Fish interest me, but, like most of Merrill’s clients, I want to see a hellbender: North America’s largest salamander. Prehistoric and almost dragon-like, with beady opaque eyes, jelly-soft bodies, and folds of skin on their sides, hellbenders are truly ancient creatures that have adapted for 160 million years. Yet at close inspection, I realize these creatures are just as gorgeous as anything you’d see swimming around a coral reef.

Even though I’m hoping for a hellbender, Merrill shows me many other incredible things I didn’t anticipate seeing. “That’s a mottled sculpin,” he says, barely lifting his mouth out of the river. “They’ll eat anything.” It looks exotic, like a miniature lionfish—not at all like something you’d expect to see in a freshwater river. A little later, Merrill smiles widely and shows me something I mistake for a hollow stick. “Caddis fly case,” he says. “The old-timers call it stick bait.” I wonder if the insects live inside, but Merrill says that instead, the caddis flies make their ornate protective cases out of sticks and leaves. What I would have normally dismissed as a soggy twig is actually the complex handiwork of aquatic larvae. He also shows me their intricate silk nests. I’m floored by how incredible it looks up close.

It’s a reminder that while viewing “rockstar” creatures like grizzlies, rhinos, or in my case, a hellbender, is thrilling, there is wonder and beauty in the smallest, most seemingly mundane, of creations.

About halfway through the trip, we reach some Class II rapids. Merrill suggests that I face upstream and try holding myself against the current by gripping rocks on the river bottom. “It’s like rock climbing,” he explains.

I awkwardly ferry out of the eddy and struggle into position. The force of the surging water rips the snorkeling from my mouth. I recover, grab a big boulder, and stick my face into the water. Below the surface, I see a truly mesmerizing sight—the underbelly of the rapids. The sensation of breathing in the face of swiftly rolling crystal water is glorious. I face upstream for several minutes watching the waves undulate over me. It’s simultaneously wildly thrilling and ultra calming. Hellbender or not, this is unlike anything I’ve ever experienced before.

After I come back up, I find that I can’t stop smiling. Merrill tells me the look on my face is part of what he enjoys most about the work. While he wants people to have fun, his ultimate aim is bigger. “I love to introduce people to the freshwater environment,” he says. “It’s something that scientists have been trying to protect for decades, but it’s a struggle to educate people about it. We get some people who don’t care about the environment, but once they experience it, they start to care. If you can get someone to have an experience, it becomes more meaningful to them.

“Everything is connected,” Merrill says. And while I’ve heard that said many times before, as I marvel at all the beauty around me on this river adventure, I really feel like it resonates.

Oxbow offers half and full-day excursions to ages 10 and up on the French Broad River, tributaries in Pisgah, and streams in the Savannah and Little Tennessee river basins. Equipment provided. Late spring is spawning season for many fish species, while hellbenders spawn in the fall. Guided hiking excursions on offer as well. (270) 339-0519; www.oxbowriversnorkeling.com