What’s in a Name?

What’s in a Name? : Avery County is 2,000 miles from the lands where the Aztec emperor Montezuma once ruled, so how did a community there get his name? 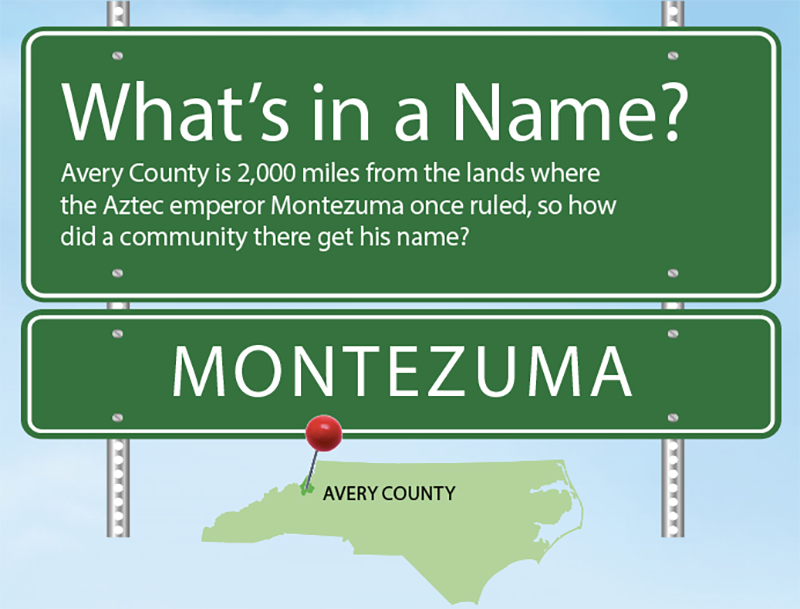 The answer begins in place called, by turns, Aaron (perhaps a biblical nod to its religious residents) and Bullscrape (perhaps owing to bullfights known to occur there, or maybe from herds of cattle scratching their bovine backs on the area’s prominent boulders). The tiny mountain community was part of Mitchell County in the early 1890s, when Hugh MacRae and a band of investors sought to turn nearby Linville into an idyllic resort town. According to local lore, MacRae and co. thought the name Bullscrape was less than ideal and endeavored to change it.

And so, the story goes, when the residents of Bullscrape sought to incorporate a town, the developers proposed the name West End, as the community sat to the western side of Linville. To avoid the appearance of imposing their preference, they added an outlandish moniker to the ballot of options for naming the town, assuming the locals would opt for the more conventional one.

But when the votes were counted, West End lost out to, you guessed it, Montezuma, and the state approved the name in 1891. And so it remains today, though the Montezuma of the mountains now resides in Avery County, which was carved out of Mitchell and other counties in 1911.